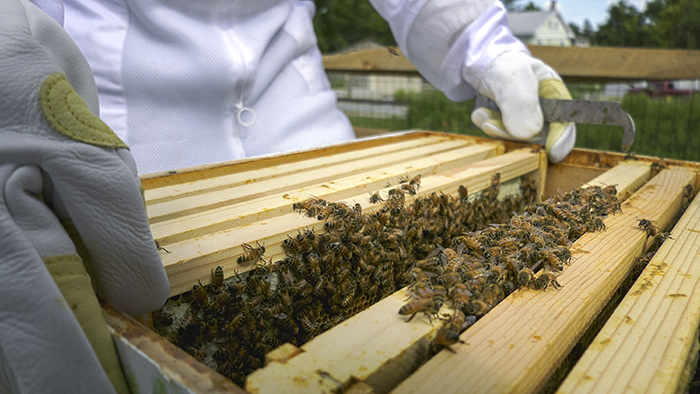 Imagine a grocery store without a produce section. Picture a springtime meadow, minus the beautiful flowers. Unfortunately, this frightening vision is increasingly becoming a real threat, thanks to colony collapse disorder, which is leading to a rapid decline in the population of a tiny yet vital creature—the bee.

While some only think of bees as honey producers, their role is much more complex and vital to our lifestyle. Bees pollinate nearly 80 percent of all flowering plants, including 70 of the top 100 human food crops. But lately, the environment once conducive to the health of these pollinators now poses many threats to their existence, and a group from Dickinson is joining researchers from across the nation to find solutions.

Dickinson, Pennsylvania State University, University of Minnesota and University of California at Davis recently received funding from the U.S. Department of Agriculture (USDA) and the Foundation for Food and Agriculture Research (FFAR) to translate basic research into online decision-support tools that help beekeepers and land managers maintain and expand populations of managed and wild bees.

Leading the charge at Dickinson is Assistant Professor of Environmental Studies Maggie Douglas, whose connection to the project began when she was doing her postdoctoral work at Penn State before coming to Dickinson. “Unfortunately, some populations of wild pollinators are in decline, and beekeeping has become more difficult," she says. "Beekeepers are losing more of their colonies than in the past.”

Douglas’ role in the project focuses on better describing patterns in pesticide use so that a stressor can be incorporated into the group’s work. She references a combination of stressors known as the Four P's: parasites, pathogens, pesticides and poor nutrition. The goal of this research is to better understand these stressors and to provide location-specific recommendations to beekeepers and land managers. In turn, the researchers will leverage data supplied by beekeepers to continue to improve scientific understanding.

This summer, two Dickinson students will assist Douglas in her research: Sara Soba ’21 (environmental science) and Karan Shakya ’20 (economics, environmental studies). This initiative arrives on the heels of The Hive’s Adopt a Bee program, in which anyone can “adopt” one of the bees in Dickinson's bee cooperative and track its role in beehives throughout the semester.