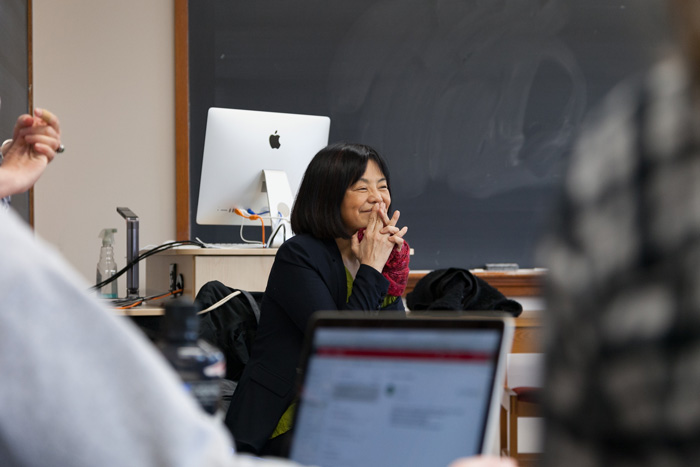 Yoko Tawada meets with students in a Dickinson German class the day before the event. Photo by Carl Socolow '77.

Internationally acclaimed writer Yoko Tawada knows what it's like to be an outsider. And she says it’s an experience we should all embrace at least once in our lives, because it allows us to see ourselves and our worlds in new ways. She’ll soon share her transcultural view during a Dickinson residency that includes workshops with students studying language, literature and writing and a public multilingual reading of her work.

An Evening With Yoko Tawada will take place on Wednesday, March 28, at 7 p.m. in the Anita Tuvin Schlechter (ATS) Auditorium. A book sale and signing will follow the program.

“Colleagues from across the region will come to her event and bring students to experience it,” said Antje Pfannkuchen, assistant professor of German and director of the Max Kade Institute of Cultural German Studies, noting that Tawada comes to campus in between readings in New York City and a Los Angeles conference held in her honor.

Born in Tokyo in 1960, Tawada studied Russian literature at Waseda University before establishing residency in Germany at age 22. After earning a master’s degree in contemporary German literature at Hamburg University and a doctorate in German literature (University of Zurich), she combined the language of her homeland and her adopted home in Nur da wo du bist da ist nichts—Anata no iru tokoro dake nani mo nai (A Void Only Where You Are), a bilingual collection of poems.

In the two decades since, Tawada has published collections of poems, short stories, radio plays, texts for the theatre, novels, literary essays and experimental performance pieces in Japanese and German. Her works have appeared in English translation and, in recent years, have been featured in major publications, including The New York Times and The New Yorker.

She’s best known for novels, poems and essays in which people and animals in transit learn to navigate unfamiliar worlds and non-native languages; her works also often explore mysticism, language and intercultural communication. Tawada has received numerous honors, including the prestigious Japanese literary award the Akutagawa Prize (1993) and Germany’s Goethe Medal (2005), recognizing her contribution to German culture, and she is the 2016 recipient of the Kleist Prize, a German literary prize.

The other as empath

As The New York Times’ Rivka Galchen observed, while Tawada’s experiences as an immigrant have naturally shaped her writing, she is also “naturally nonnative,” with a sense of “otherness” that transcends geography and citizenship status. The result, Galchen wrote, is a “profound empathy.”

In an interview with Bettina Brandt, Tawada revealed that this way of experiencing the world is also, to some extent, a conscious choice, because she believes that stepping outside our native cultures and institutions can help us all become “at least partially reborn.”

“You can observe the patterns of new institutions in a foreign world with the critical consciousness of an adult and selectively appropriate them like an actor does. It also makes it possible to see and observe while maintaining a distance to your own culture,” Tawada explained. “This heightened consciousness in turn can lead to the creation of artworks that are compasses and mirrors.”

Audiences will gain a sense of this global sensibility during Tawada’s public reading at Dickinson, as the author and poet reads works in Japanese and German. Brandt, a prominent scholar and translator of Tawada’s work, will provide translations in English and other languages.