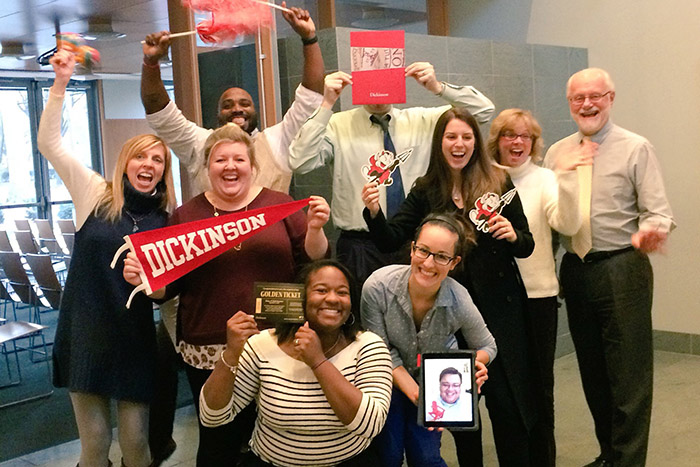 Members of the admissions staff celebrate the latest round of acceptances!

And these application numbers are no accident—Dickinson’s admissions staff has increased outreach efforts, including adding regional counselors in suburban Boston and Charlotte and expanding travel and outreach around the world. These application numbers also come on the heels of record attendance at fall on-campus visit programs as well as President Margee Ensign’s Useful Education for the Common Good tour, which continues to generate a great deal of excitement around the country.

Applicants to the class of 2022 represent 49 states and 93 countries. Twenty-seven percent of applicants are domestic students of color, and 21 percent are international students. And even though Dickinson is test-optional, the average SAT score of this applicant pool increased from 1287 to 1298 over last year, and the average ACT score moved from 29 to 30.

“The enrollment team has done a terrific job of meeting students in their home areas as well as on campus,” says Dean of Admissions Catherine McDonald Davenport ’87. “It has been energizing to read applications from bright, interesting students who really get Dickinson and appreciate the authentic connections they have made with faculty, students, alums and coaches.”

And Dickinsonians will have the opportunity to enhance those connections this spring during several on-campus programs designed specifically for admitted and enrolled students, as well as around the country at off-campus receptions hosted by Dickinson alumni and parents. In addition, the annual Celebrate and Congratulate postcard-signing event kicks off Feb. 12-14 with opportunities for everyone on campus to write personal notes of congratulations to every admitted student.