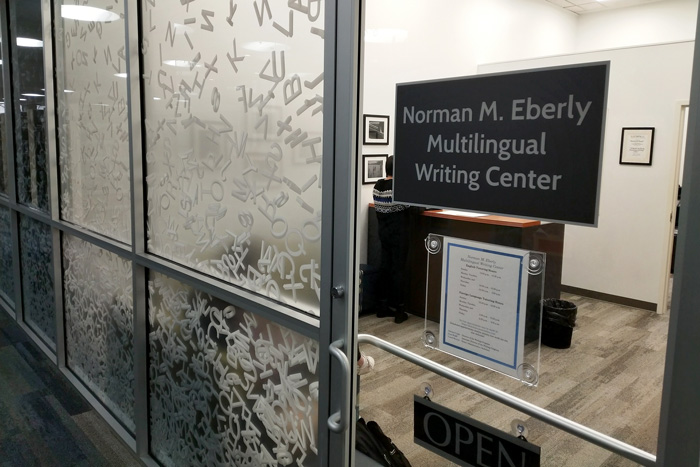 Dickinson’s writing program recently received an honor bestowed on only four other liberal-arts college programs, ever: the CCCC Writing Program Certificate of Excellence, given to a handful of colleges yearly by the National Council of Teachers of English’s Conference on College Composition and Communication (CCCC).

For those in the field of writing studies, this is the highest award from the discipline's most prestigious body, and Dickinson is one of only nine recipients nationwide this year.

“It’s an honor to be recognized like this from the top organization in the ﬁeld,” says Noreen Lape, associate provost of academic affairs and director of the writing program. “It's much more common for the large universities to be recognized, because they have elaborate writing programs that deliver composition instruction to tens of thousands of students. So it's especially nice for a small liberal-arts college to have our work honored like this.”

The last time a liberal-arts college was honored was ﬁve years ago.

“It's an award that belongs to the whole campus community,” says Lape, noting that the writing program has several prongs: the Norman M. Eberly Multilingual Writing Center, the writing associates program, Writing in the Discipline (WID) courses, faculty development around writing and assessment. “There are 70-plus students who work in the multilingual writing center, and they are and always have been the backbone of the writing program. And then we have this amazing faculty who value writing, make teaching a priority and are willing to collaborate. In a school where there are a lot of silos, you can't do that.”

“This program stands out because of its deeply multilingual work,” said the CCCC press release announcing the honor, which also cites the Dickinson faculty’s 35 percent participation rate in professional development related to teaching writing. “The multilingual writing center is a wonderful example of making translingual and transdisciplinary work visible, [and] the writing fellows/associates program design is particularly thoughtful and innovative.”

Dickinson’s writing program is the only such program in the world that offers writing instruction and assistance in 11 languages. The peer writing tutors in the writing center work with Dickinson students from around the world while also having the unique opportunity to assist international fellows at the U.S. Army War College.

“So many of our writing tutors report that the skills they learned and used as tutors beneﬁt them greatly in the job world after graduation,” says Lape, who notes that tutors work out of the writing center in the Waidner-Spahr Library and in the classroom as writing associates. “They learn to be versatile—good learners and writers.”

The certiﬁcate will be announced ofﬁcially on March 16, 2018, during the 2018 CCCC annual convention in Kansas City, Missouri.