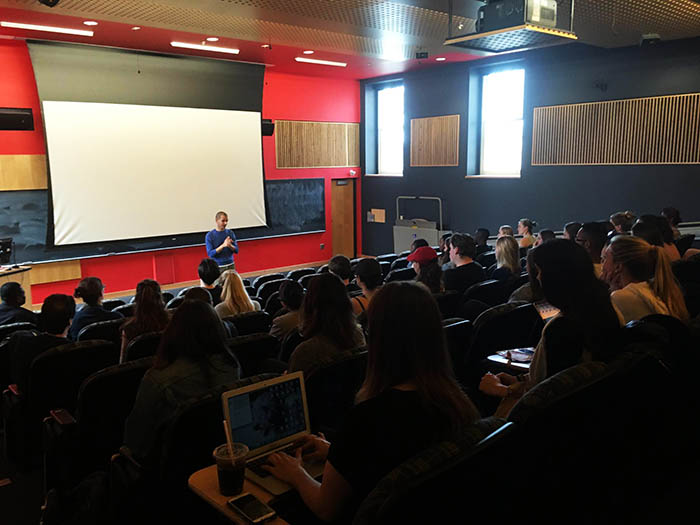 There’s a Russian word for great spiritual anguish, and a German word for the feeling of homesickness for a place you’ve never been. A Japanese word for a kind of scattered light, as if filtered through trees, and a French phrase meaning to chuckle nostalgically into one’s beard. Anyone can recognize the broad phenomena these words describe, but to really get at deeper meanings, you need to know a little something about France's penchant for philosophical conversation, say, or Japan's profound reverence for nature. High-profile international guests, hosted by Dickinson's foreign-language departments throughout the year, help fill in those cultural gaps.

By meeting with international directors, writers, performers, scholars and influencers in and out of class, and discussing their works in depth, students pick up vivid insights about global cultures, languages and life. This year's distinguished guests shared nuanced perspectives on gay life in Morocco, political and social media revolutions in Cuba, diversity in Italian cinema, a German view of contemporary America and more.

Morocco and Cuba in film

Moroccan Abdellah Taïa is the author of 10 novels in French, which have been translated into eight different languages. He's also a writer-director who brings a powerful narrative to the silver screen, opening a window to life as a gay man in the Arab-Muslim world. At Dickinson this spring, he screened and discussed his semiautobiographical 2013 film Salvation Army, dubbed “a valuable contribution not only to queer fiction but to North African diaspora literature (Interview magazine).”

"I found what he said about finding his identity inspiring and touching, and his message has really stayed with me," said Demetria Ruhl ’20 (chemistry). "While he realized that he could not make generalizations about all Moroccans or Africans, I think his story gave us a really unique and valuable perspective."

Cuban director Miguel Coyula and actor Lynn Cruz came to Dickinson, courtesy of the departments of Spanish & Portuguese and Latin American, Latino & Caribbean studies, to screen Coyula’s documentary-in-progress, Nadie, in English and French. The film, which won best documentary at the Dominican Festival of Cinema, includes reflections on the Cuban Revolution and profiles poet Rafael Alcides Pérez, tapping a theme explored by students in a 2016 mini-Mosaic to Cuba who translated Cuban poetry and presented their work to Pérez’s contemporary, Roly Ávalos Díaz.

In another Spanish & Portuguese event, Gustavo Arcos of Cuba’s University of the Arts provided an expert’s view of Cuban cinema and culture when he screened Cuban films rarely seen in the U.S. He delivered a lecture about the ways in which audiovisual media and the internet reflect and influence changes in modern Cuban civil society.

Onstage and on page

Tsvetkov is a poet and fiction writer who emigrated from Russia in 1975 after being censored and arrested for his work; ironically, his 2007 collection, Names of Love, contributed to his winning Russia’s most prestigious literary prize. While on campus, he visited with students in Russian language classes, discussing literature, his life in Russia and America and his long, bicontinental career. He also delivered a public reading of his work.

Kuwornu is an Italian-born activist, writer, producer and director best known for his award-winning documentary Inside Buffalo. He presented his 2016 documentary, Blaxploitalian: 100 Years of Blackness in Italian Cinema. Exploring the challenges Afro-Italian and African diasporic actors have faced, the film is a call to action for increased diversity in international cinema.

Italian movie and television director/writer Carlo Lavagna came to Dickinson as a visiting international scholar. He worked with Italian and film studies students in and out of class, co-taught a video production course and screened his 2015 feature film, Arianna, a coming-of-age story that explores gender and gender identity. Lavagna also participated in campus events, including the screening of other Italian language films. 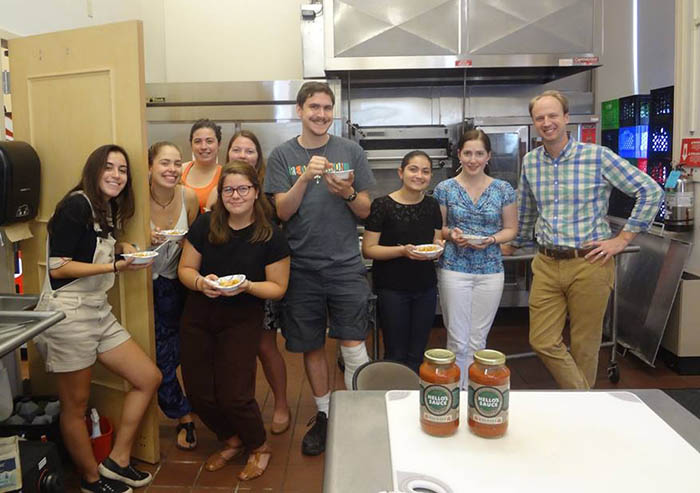 A famed German author served a spring residency at Dickinson with funding from a prestigious Kade grant. Thea Dorn has written fiction, nonfiction, movies and plays and cohosts a popular literary show on German television. During her Dickinson residency she met with students in small groups, visited classrooms and delivered a public reading—in German, with English text projected on a screen—from her latest novel, Die Unglückseligen (The Unfortunate Ones).

Corson Ellis ’20 (German, French) well understands that the chance to learn directly from a well-known German public figure was not only interesting but helpful. “The best way to learn a language is to understand how native speakers think,” he says.

Liz Bodenman ’20 (international studies) agrees. “You can try to learn a language without these experiences all you want,” says Bodenman, who attended the Dorn reading as well as movie nights, foreign language dinners and other spring events hosted by her major department, “but if you aren't exposed to the culture, it's difficult to engage and truly appreciate where the language comes from.”

The fact that students from all majors can interact directly with noted international artists, thinkers and public figures right on campus only deepens the experience, adds Emma Spector ’19 (political science, French & Francophone studies).

“We learn about these complex theories or events in class, but actually getting to meet someone who has that lived experience allows me to further the human connection beyond watching a movie or reading a book,” says Spector, who attended a screening and small-group luncheon with Taïa and interacted with the writer-director in a French class. “It’s an incredible experience.”