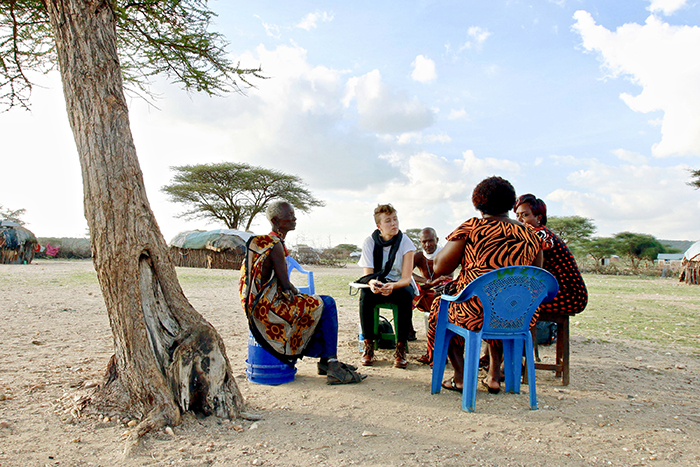 Inspired by her coursework and a one-year study abroad experience in Morocco and Cameroon, political science and French major Siobhán O’Grady ’13 pursued a journalism career, covering stories in sub-Saharan Africa. After a stint as a staff writer for Foreign Policy magazine, she now works as a freelance journalist, chasing stories that have taken her to South Sudan, Democratic Republic of the Congo, Kenya, Uganda and Sénégal. Her broad spectrum of coverage includes war crimes, drones, music, female genital mutilation, refugee crises, illegal moonshine and vigilante movements. She is a two-time grant recipient from the International Women’s Media Foundation and a 2017 International Reporting Project Fellow in Nigeria, where she will spend time this spring reporting on gender and LGBTI issues. In addition to Foreign Policy, her work has appeared in the The Atlantic, Huck, NewsDeeply, as well as the Houston Chronicle, San Antonio Express-News and San Francisco Chronicle.

I knew I wanted to double major in political science and French, and thought I would pursue a career in politics or the foreign service, but it soon became clear to me that my heart was in writing and storytelling. My sophomore spring, I signed up for a course called Media and Politics in the Middle East and North Africa, taught by [Associate] Professor [of Political Science and International Studies] Ed Webb. Shortly before the semester started, Tunisian street vendor Mohamed Bouazizi self-immolated, lighting the flame that would ignite the Arab Spring and change the region forever. Part of the requirements for the class were signing up for Twitter accounts and creating blogs. That was my first foray into public analysis of current events, which forced me not only to stay on top of the news but also to really form my own opinions.

So much happened that semester, from mass uprisings and political mayhem to the death of Osama bin Laden. Professor Webb had us talk about it all, and that got me hooked on learning more. I signed up for a semester in Morocco, where I lived with a host family, studied Arabic and interned at the Maghreb Arab Press, Morocco’s national news agency. I didn’t know it then, but that was really a turning point for me in committing to a career in journalism. A second semester in Cameroon sealed the deal.

Every Wednesday night, a group of friends and I would drive to Thornwald Nursing Home and play Bingo with the residents. At first, we would just announce the numbers and hand out candy to the winners, but we eventually decided to spice things up. We would roll into that place with more energy than we knew what to do with, creating all kinds of crazy prizes and awards, announcing a Bingo Queen each week and sparking a healthy competitive attitude between the residents. It became a way to disconnect from the stresses of coursework.

One of the most difficult parts of breaking into journalism is navigating the job market and competing for the very few prestigious internships or fellowships that can serve as a springboard for your career. After graduation, I turned to Dickinson alum Chuck Strum ’70, a former editor at The New York Times, for advice, and I am eternally grateful that he took the time to respond to emails from a complete stranger, talked with me on the phone and even brought me into the Times office for a meeting and a tour. He encouraged me to take every journalistic opportunity that came my way, even if it wasn’t my dream job. Within a year of heeding his advice, I was offered a position at Foreign Policy. Now I see it as my responsibility to advise Dickinson students about the best way to go about finding a path into journalism as liberal-arts students. I am able to share contacts at various publications and recommend students I’ve met for internships where it helps to have an acquaintance move your application to the top of the pile. Some of my favorite moments since graduating have been meeting with students or recent grads and seeing how I can be of help, whether it’s reading a cover letter, sending them job opportunities or sending a recommendation email to an editor.

I can’t stress enough how much my experience studying abroad in Morocco and Cameroon shaped every major life decision I’ve made since. Interning at a news outlet in Rabat and then exploring the intricacies of Cameroonian society—while simultaneously living with host families and studying African politics in a larger context—prepared me for my travels elsewhere in the region and gave me the groundwork I needed to write authoritatively on a wide range of subjects. While there, I kept a journal, jotting down notes and collecting stories, and that practice helped me realize that journalism was the direction in which I was headed.

As a white American collecting people’s stories across sub-Saharan Africa, I need to constantly be aware of how my own worldview is potentially skewing the narrative or affecting the way I interpret someone else’s experience. Part of the reason I decided to leave my desk at Foreign Policy was that I was tired of what we call “parachute reporting.” You land in a situation for maybe a week or less and report extensively on what you learn, without spending enough time to understand the intricacies of a situation.

Even when you live somewhere, it’s rare to have the chance to spend more than a few hours with the people you end up interviewing. I’ve spoken to rape victims, men and women who have seen their loved ones slaughtered in front of them and women who were genitally mutilated at a young age. When I was working in a South Sudanese refugee camp in northern Uganda, I sat with a family whose 7-month-old son had died just days before and bowed my head with them to say a prayer over his tiny grave. I had met them 15 minutes earlier. I’ll never stop learning from moments like these about how to be a better reporter, what the boundaries of my role are and how to behave in such intimate and difficult moments.

Traveling to South Sudan on a grant from the International Women’s Media Foundation during a very brief period of relative stability in the middle of a brutal civil war. I had the opportunity to catch up with Riek Machar, a rebel leader, for an exclusive interview in his armed camp on the outskirts of the capital. The next day, I flew on a World Food Program helicopter to a rebel-controlled region to spend time with civilians most affected by the conflict, who were relying on food handouts and had witnessed mass atrocities at the hands of government troops.

Getting to visit both the government-controlled capital and a rural area in the middle of the Sudd swamplands where residents have never had an active cell tower gave me two completely different perspectives on the conflict and on the challenges facing the world’s youngest country. The story I published is one of the Foreign Policy pieces of which I’m most proud.

Over the past few years I've read and re-read everything Nigerian novelist Chimamanda Ngozi Adichie has written. Now that I'm moving to Lagos, I'd love to meet up with her, and maybe I will! I've heard her favorite bookstore is just a few blocks from my new place.

I’d love to go back in time to see the Democratic Republic of Congo at the time of its independence. I’ve had a book idea floating around for a while, but it is going to take a lot of research for me to ever get started on it. It would be a lot easier to just go back and see it for myself.

I’d like to have a little more certainty about my work and a more concrete schedule. There are many amazing things about freelancing, but my work comes and goes in waves. And of course, I’d prefer for many of the places I’m writing about to put an end to their conflicts so that I can report more about the joys I have found in these pockets of the world—and that editors were more open to stories of normalcy from Africa.