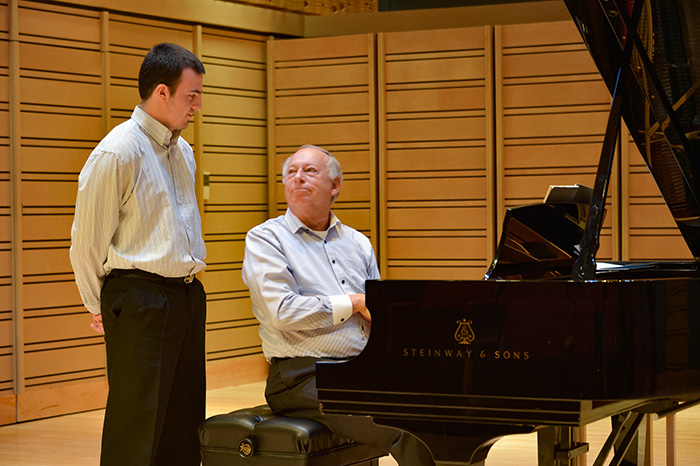 Internationally acclaimed pianist Barry Snyder, the recipient of the 2016 Arts Award, delivers pointers during a master class in Rubendall Recital Hall. Photo by A. Pierce Bounds '71.

This is the year of Sergei Prokofiev, a major 20th-century Russian composer who worked across musical genres to create fresh and daring works that still electrify, 125 years after his birth. As concert venues across his home country and around the world ring out with anniversary-year tributes, Dickinson presents a four-day residency built around his most celebrated works.

The 2016-17 Arts Award residency honors Barry Snyder, a three-time Van Cliburn International Award-winner and leading music educator, and one of eight visiting artists at Dickinson this fall. This year's events included public lectures, discussions and performances; classroom visits and master classes; a brief presentation at Dickinson’s Children’s Center; informal meetings with students and faculty; and a panel discussion around music and the liberal arts.

The weekend culminated with Snyder’s performance of Prokofiev’s sixth, seventh and eighth sonatas for solo piano, known collectively as the “War Sonatas,” and written immediately before, during and immediately after World War II. The concert was preceded by a brief talk by Simon Morrison, an expert in 20th-century Russian music, who noted that although Prokofiev's most famous works are "tenuously associated" with the theme of war, they are inextricably associated with it, not just because of when they were composed, but also because of their nerve-jangling and radical sound, which seems to express the anxieties of Stalinist rule.

"His lecture was fascinating," said Katya Hrichak ’17, a double major in English and music who played clarinet in the Dickinson Orchestra’s performance of Prokofiev works and also attended the Arts Award presentation and panel discussion. She added that the deep context "brought a new level of appreciation" for the music, that simply hearing or performing may not provide.

“Understanding the context of what I play makes me a better performer [and] performing provides me with incredible tools for my work in [studying music history and musicology]. They go hand in hand,” agreed Morgan Bates ’18, a fellow music major who played trumpet in Friday night's concert and in Saturday's master class, and was inspired by the Saturday roundtable discussion. “I take for granted the fact that I can double major in performance and music history with an emphasis in feminist and queer musicology, and the fact that I can write a paper about a piece and play it too. But as I learned during the panel discussion, these opportunities are rare."

And so are the opportunities to interact with the honored guests, said Sam Phelps ’19, who studies music composition, and Alicia Bazell ’18 (psychology, music). Whether during master classes with Snyder, or during shared meals or classes with the acclaimed musician and music historian, or at a post-concert reception for the honorees and music-department students and faculty, they appreciated the chance to ask questions and make professional contacts.

“It epitomizes why I chose Dickinson,” Bazell said. “I am able to make meaningful connections, personally and professionally, with both my professors and resident artists like Mr. Snyder, in a way that just would not be possible at a large university.”