On Military Strategy and Donald Trump 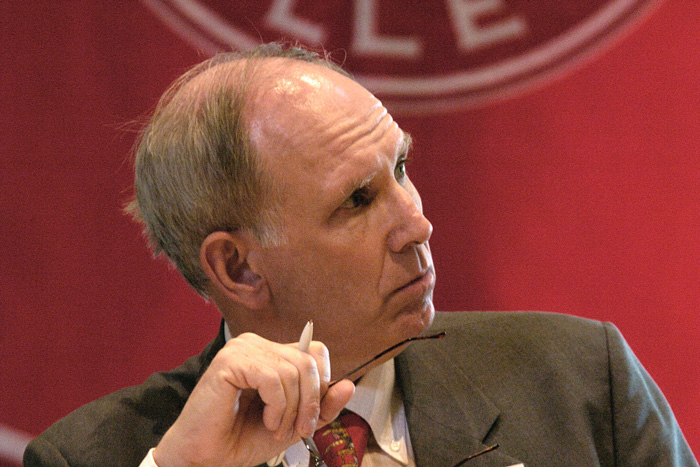 Jeff McCausland, visiting professor of international security affairs, is one of three panelists who will discuss the current situation on the Korean Peninsula.

Referring to retired U.S. Army Colonel Jeff McCausland, a visiting professor of international security studies at Dickinson, Donald Trump told ABC’s George Stephanopoulos, “You can tell your military expert that I’ll sit down and I’ll teach him a couple of things.” Trump made the statement after McCausland told The New York Times, “Mr. Trump doesn’t know a damn thing about military strategy.”

Today, McCausland has this to say:

“I can’t wait to sit down with Mr. Trump and hear what he has to teach me about military strategy. I’m happy to compare my record of over 45 years working in national security affairs with his any time. First, let’s review Donald Trump’s record on military strategy.

“He never served in the military and never served the government. During the primary campaign, Mr. Trump also made it very clear that he had no understanding of the nuclear triad or nuclear strategy. This is perhaps the most important thing any potential commander-in-chief needs to understand.

“Regarding Iraq, Mr. Trump said the U.S. military should have seized the oil fields in Iraq. It boggles the mind to imagine how many U.S. troops it would have taken to seize the oil in Iraq and how many U.S. casualties we would have suffered. I cannot imagine that the population of Iraq would have stood idly by while the United States looted the country of its most precious resource. Furthermore, this is considered a war crime under international law, and ordering the U.S. military to do so would have created a crisis in civil-military relations with the senior uniformed military.

“Finally, even if we had occupied the oil fields, it would have still required us to secure pipelines that stretch for miles across Iraq, requiring additional forces and resulting in greater casualties. This was a major task that we attempted to assist the Iraqi government with during the time we had large numbers of troops in the country.

“When it comes to the question of the Mosul offensive, Mr. Trump doesn’t understand that 99.9 percent of the troops involved are Iraqi. War remains politics by other means, as Clausewitz once said. The Iraqi government has had a political imperative to publicly state that they would liberate Mosul since it was occupied by ISIS over two years ago. It is the second largest city in the country, and consequently Prime Minister Abadi has had a political imperative to reassure the Iraqi people that this was a goal. Iraq is a sovereign state, which has always been a goal of U.S. policy, so once cities like Ramadi or Fallujah in southwestern Iraq were liberated, everyone knew Mosul was next.

“In preparation for the offensive, the coalition dropped millions of leaflets over Mosul. This was done to reassure the civilian population that they would be liberated, hopefully serve to reduce collateral damage and provide them guidance on how to best protect themselves and their families. It is clearly the desire of the U.S. and Iraqi governments to eliminate collateral damage to the civilian population of Mosul. We do not want Mosul to look like Aleppo. Finally, it’s impossible to mask the fact that you’re hiding thousands of troops in the desert outside Mosul as you prepare for the attack and secure bases in the area for logistical support.

“To use historical comparisons that Mr. Trump likes so much, by the spring of 1944, the Germans knew we were going to come back and liberate France. Exactly when and where were questions of operations tactics. The Germans fortified the beaches and Rommel may have been operationally surprised, but he was hardly strategically surprised. Mr. Trump has repeatedly stated his admiration for General George Patton, but Patton’s job prior to the Normandy invasion was to lead a ‘shadow army’ in Great Britain to deceive the Germans as to when the attack would occur. This was to assist operations and tactics. In the Far East, the Japanese knew by spring 1945 that we were going to attack Okinawa and Iwo Jima. They fortified the islands in many ways, like ISIS has done in Mosul. But they knew we were coming.

“For all those reasons, I reassert my statement to The New York Times: Mr. Trump doesn’t know a damn thing about military strategy.”

Dr. Jeffrey McCausland is visiting professor of international security studies at Dickinson College. He is a retired Army colonel and veteran whose work has taken him all over the world, serving in a variety of command and staff positions in places such as on the National Security Council staff, U.S. Army War College and the Pentagon. He commanded a battalion during the Gulf War and while in uniform served in Europe during the Cold War, as well as in Bosnia and Kosovo. He has also spent time on numerous occasions in Iraq and Afghanistan since 2003.

McCausland is the founder and CEO of Diamond6 Leadership and Strategy, LLC. Diamond6 conducts executive leadership workshops for corporate, public and nonprofit leadership teams across the United States.

Since 2003, McCausland has served as a national security consultant to CBS radio and television as a frequent commentator on the wars in Iraq and Afghanistan. McCausland also has appeared on MSNBC, CSPAN, CNN and the CBS Morning Show and has been interviewed by The New York Times, The Christian Science Monitor, The Wall Street Journal, and The Boston Globe.