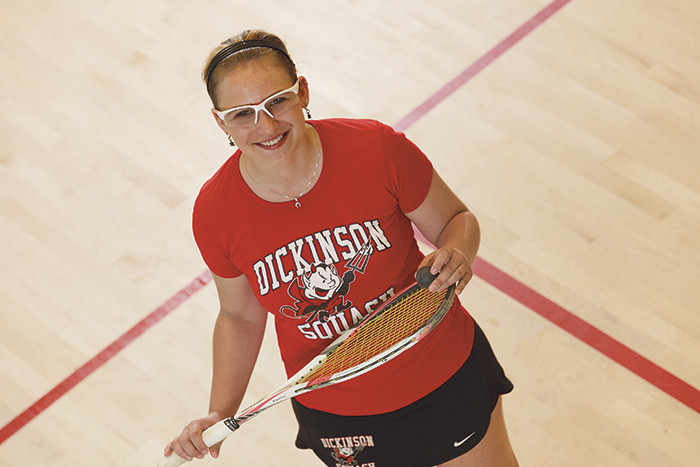 Hedvika Suchankova ’19 is not afraid to let her passion for athletics take her around the globe. From home in the Czech Republic, her love for squash brought her to Canada for her final year of high school before leading her to Dickinson to pursue the sport further.

“I did not visit Dickinson before applying, and, honestly, I had just a little knowledge about this place even when I was getting on the plane,” she says. When her coach in Canada told her about Dickinson’s developing squash program and recommended she apply, Suchankova was immediately interested.

And her interest paid off—in just one year as a Red Devil, Suchankova ranked as one of the top 50 players in the College Squash Association (CSA). She posted a 9-5 record in her first season, winning seven of her final 10 matches, advanced to the quarterfinals of the Holleran Cup in the D-Division and led the Red Devil women to their second-straight appearance in the CSA Team Championships.

Even though she’s played squash since age 8, the experience here is unlike what she’s known in either the Czech Republic or Canada. In addition to being able to play as often as she likes, she says the team aspect is new to her. Before Dickinson, she competed only in singles matches and individual tournaments. “I’m also not used to being a 10-minute walk from the squash courts,” she says. “I used to travel for one hour to a different city to actually have good practices.”

As a biology major, Suchankova participates in the pre-health track in preparation for a career in physical therapy, and she enjoys the academic freedom of Dickinson’s liberal-arts education.

“The experience here is something totally different,” she says. “I know that if I went back home, I would study just physical therapy, and I would never get to try Spanish, archaeology, psychology and things I’m really interested in.”

As a sophomore, she isn’t certain about what the future beyond Dickinson holds just yet, but she knows that her time on the squash team here will continue to help her grow as an athlete. “I’m trying to do my best in all the games to not let the team down and at the same time trying to cheer for everyone,” she says. “It’s helped my internal growth a lot because it’s not just about me. I have to focus more; I have to do my best every time.”