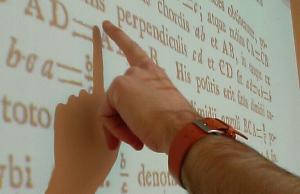 Leonhard Euler was an 18th-century Swiss mathematician who often wrote complex mathematical equations and usually surrounded them with exceedingly long and complex sections of prose. He wrote around 850 such works, most of them in German or (gasp!) Latin. So getting beyond the language barrier represents a challenge for many mathematicians looking to study Euler's original works.

Now there is a project under way at Dickinson to translate some of these works and submit them to the Euler Archive, hosted by the Mathematical Association of America, so scholars around the world can study them in English.

Translating centuries-old texts might sound challenging enough, but then there's also the matter of the math.

"The truth is, the math is tricky enough that it would be hard to hand it to a classical-studies major for a translation. You'd need to know some of the math," explains Associate Professor of Mathematics Dave Richeson, whose book Euler's Gem established him as something of an Euler authority. "But then the Latin is hard enough that you can't just hand it to a math major. And the sentences are gargantuan."

As Professor of Classical Languages Chris Francese, who is also involved with the project on the Latin front, explains, "This translation work cannot be done without both a mathematician and a Latinist in the room. The Latin is often fiendishly difficult, and the math is somewhat obscure as well."
What undergraduate student would willingly step in front of something described as "fiendishly difficult"?

Let's start with Travis Ramsey '13, a math major with a love of languages. "I wanted to take Latin in high school, but they didn't offer it at my high school," he says. "So I took Spanish for two years and started taking Latin at Dickinson."

Ramsey—who is currently polishing his translation of Euler's "Solutio Problematis geometrici circa lunulas a circulis formatas" (published in 1744), which he's translated as "Solution of a Geometric Problem About Lunes Formed From Circles"—has cultivated his skills in the classroom and by doing his original translation of the work in the fall of 2012, after catching the eye of Richeson and Francese.

"Chris and I talked about Travis because we knew he was interested in both Latin and math," Richeson explains. "Things came together last semester, and we realized that Travis could do some of the translating and that it could be part of his final paper for his history of math class."

The torch was passed

Ramsey isn't the first Dickinson student to take up the task of bringing mathematical texts to a wider English-speaking audience. Anne Maiale '08, a German major with a math minor (and who later returned to complete a math major), worked on the project through a Dana Research Assistantship and beat Ramsey to it by a few years.

"I was a relatively inexperienced mathematician and German speaker, and I had to understand every word in the German text, learn to understand the mathematical concept behind it through discussion with Professor Richeson and decide on the best way to express that in English mathematical terms," says Maiale, currently a data analyst. "It was an extremely rewarding and interesting project."

As it turns out, how material is expressed in English is the key to the success of the entire project, and Richeson, Francese and Ramsey spend a lot of their time rooting out the devil in the details. In this case, that means finding the soft line between doing a literal translation—which can often be choppy and hard to read—and taking some liberties for the sake of readability but risking divergence from the original meaning of the author.

"There's a sweet spot that's hard to hit," says Richeson. "And watching Travis and Chris drawing these arrows connecting the subjects and the verbs ..." He breaks off, laughing with Ramsey

"Compared to other things I've translated from Latin in my classes, this has been more difficult," Ramsey says. "Easier in some ways—it's written in prose, which is easier than Latin poetry—but Euler doesn't write so that the reader can easily understand it.

With the need clearly there, and Euler's volumes overwhelming, the project already is gearing up for more students interested in tackling the fiendishly difficult, starting with Katie Roy '15, a physics/math double major with an abiding interest in Latin.

And it could go on forever.