Faster Than a Speeding Asteroid 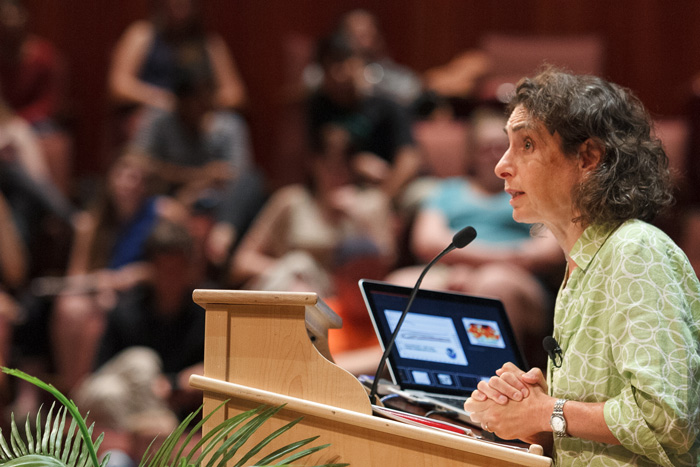 When most people think of extinction today, they often focus on one endangered species—the honeybee, perhaps, or the tree frog or polar bear—in one pocket of the globe. That’s a distressing picture, but it’s far from complete, writes Elizabeth Kolbert in her Pulitzer Prize-winning book, The Sixth Extinction: An Unnatural History. Instead, Kolbert describes a much more comprehensive and alarming phenomenon—a major mass extinction, like the one that eliminated the dinosaurs some 65 million years ago, that’s now underway.

“A lot of species across a lot of species groups are going extinct at the same time,” Kolbert said, adding that, unlike the five previous major mass extinctions written in the fossil record, the current event is not caused by a cold snap or asteroid, but by humans, and it’s advancing at an unprecedented rate. “We think that it’s normal to see things go extinct, but it’s very, very unusual—we should not be able to identify any species that’s gone extinct in the course of our lifetimes.”

The recipient of the 2016 Sam Rose ’58 and Julie Walters Prize at Dickinson College for Global Environmental Activism, Kolbert visited campus this week for a four-day residency that included a public address, classroom visits and small-group meetings with students and faculty. Throughout her stay, she discussed her groundbreaking book and what it was like to research it—a multiyear project that took her to rainforests, mountain ranges, oceans and labs to meet top scientists in the field and on the front lines in the fight against extinction and climate change.

From politics to environmentalism

Kolbert earned a literature degree at Yale and worked as a New York Times Metro Matters columnist and Times Magazine reporter before joining the staff at The New Yorker in 1999; she also has published articles in Vogue and Mother Jones, and her work has been anthologized in The Best American Science and Nature Writing as well as The Best American Political Writing.

Her work includes memorable political profiles of Hillary Clinton, Rudolph Guiliani and Michael Bloomberg; the 2004 collection The Prophet of Love and Other Tales of Power and Deceit; and a three-part, 2006 New Yorker series that grew into her seminal book on climate change, Field Notes From a Catastrophe, cementing her place as an esteemed science writer. That book garnered a National Magazine Award for Public Interest, American Association for the Advancement of Science Journalism Award and National Academies Communication Award and was named one of the 100 Notable Books of the Year (2006) by The New York Times Book Review. Kolbert also is the recipient of a Lannan Literary Fellowship in 2006, a Heinz Award in 2010, the 2010 National Magazine Award for Reviews and Criticism and the Sierra Club's 2011 David R. Brower Award. She recently received the Walter Sullivan Award for Excellence in Science Journalism from the American Geophysical Union.

Kolbert earned a Guggenheim grant to travel the globe to research The Sixth Extinction. A New York Times bestseller and one of the Times' 100 Most Notable Books of 2014, The Sixth Extinction was was dubbed “a wonderful book” by President Barack Obama and “an invaluable contribution to our understanding” by former Vice President Al Gore.

It's a surprisingly breezy read, by turns touching, funny and unnerving, that dives deep into the history of scientific thought on extinction and the science behind current developments on that front. Whether recounting her experiences of witnessing the discovery of a new plant species, observing the majesty and fragility of the Great Barrier Reef, climbing into caves to count dwindling numbers of bats or beholding the unforgettable choreography of a rhino’s ultrasound, Kolbert makes a strong case. She also delivers a fascinating travelogue, packed with spectacular vistas, systems and creatures as well as memorable sketches of the people who work to preserve them and a thoughtful meditation on the nature of the very species that's simultaneously advancing and fighting environmental catastrophe.

Eye on the future 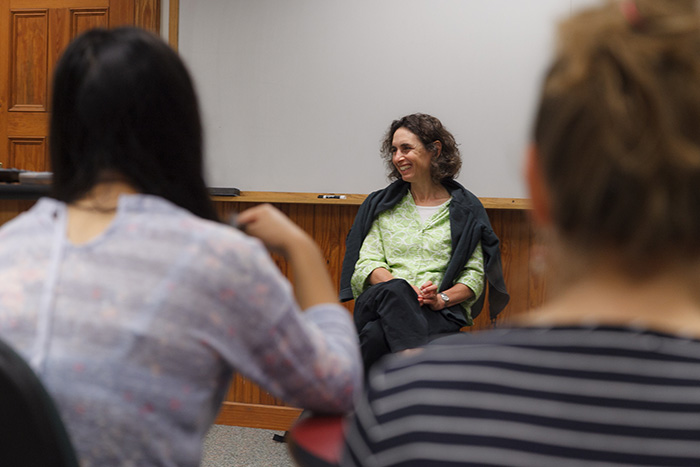 Speaking during an on-campus interview, Kolbert expressed her gratitude at being named the 2016 Rose-Walters Award winner and remarked on her journey from literature major to political reporter to Pulitzer Prize-winning science writer and offered her view on the value of the liberal arts. “Knowledge is power, and it’s better to know things, including things that are painful. And certainly, the Western liberal-arts tradition depends on that,” Kolbert said, adding that she "applauds Dickinson for incorporating those lessons" across the curriculum.

The journalist, educator and mother of three also weighed in on the importance of sustainability education in preparing a new generation of problem-solvers to address the environmental issues she describes.

“This is an issue for which there’s a timeline—so one generation is really leaving the problem to the other, and the next generation should really be aware of that,” she asserted. “There are huge issues of intergenerational equity and international equity, and I encourage young people to get angry. This is really the issue of their time.”