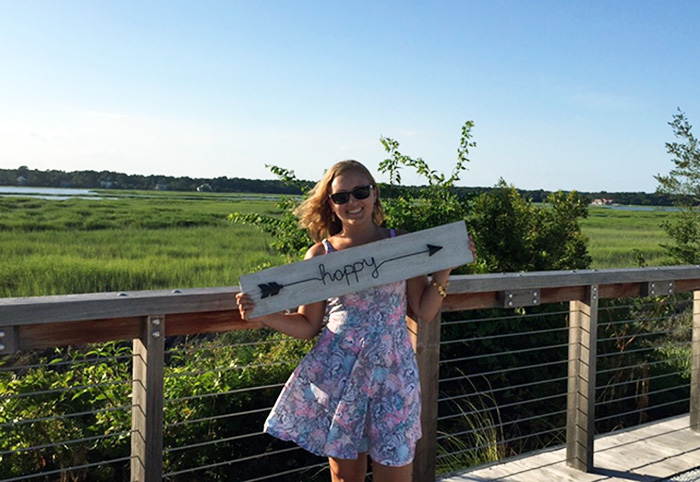 Student-leader Caroline Snyder ’19 never thought she’d attend her parents’ and grandparents’ alma mater, but after visiting campus, she decided to apply to Dickinson through Early Decision. She's involved on campus as a first-year mentor, tour guide, student worker and musician, and she recently received news that she'll perform at a national trumpet competition, along with Ian White '19 (classical studies, economics), Morgan Bates '18 (music) and fellow orchestra member Miranda Lape. Below, Caroline explains why she calls Dickinson home, the classes that inspired her to broaden her academic horizons and what her Dickinson has been like, from her seminar on music to the book she discovered during the Emerging Leaders’ Retreat.

Creativity, Inc.: Overcoming the Unseen Forces That Stand in the Way of True Inspiration by Ed Catmull (Thank you, Josh and Jessee, for introducing me to this book during the Emerging Leaders Retreat).

I came to college thinking that I was going to major in theatre and international studies, but now, I am leaning toward a double major in anthropology and music. I took Biological Anthropology as my lab and loved it, and I was already involved in the music program and wanted to delve deeper into this subject. It is amazing how you are able to just come across a major at a liberal arts school by doing what you love.

I knew Dickinson was the only place for me because of the people. When I visited campus, all of the students that I met were so genuine, kind and well-rounded, and [when I sat in on classes,] the professors wanted to get to know me, even as a prospective student. I felt like I was already a Dickinsonian.

Morgan Field on the first warm day of spring.

The brisket with carrots and applesauce in the KOVE.

To date, my favorite class has been my first-year seminar, Music in Social Conflict. We learned about music during the Holocaust, Apartheid and the Civil Rights period. This class taught me how to look at historical tragedy through different lenses.

… a zookeeper. The goal was to work at the zoo together with my grandfather, known as Pop to his grandkids, as a zookeeper and popcorn vendor.

I hope to work for the Walt Disney Company in some capacity. I would love to work on the cruise ships, planning or hosting events, as I enjoy traveling and hospitality.

Professor [of Music Jennifer] Blyth, my first-year seminar professor, and [Contributing Faculty in Trumpet Jeffrey] Wohlbach, my trumpet and Jazz Ensemble professor, were both essential in my transition into college life. Professor Blyth helped me to look at events in the past and present with a more open mind, and she taught me how to make sure my voice was present in my writing. Professor Wohlbach has always been someone I can go to when I need advice. He continues to help me become more confident in playing the trumpet as well as with making “adult” decisions. Both Professor Blyth and Professor Wohlbach have been two of my biggest supporters at Dickinson. [Director of Student Leadership and Campus Engagement] Josh Eisenberg has also been a guidance counselor to me, as we share a Midwest tie. (Go Buckeyes!) He is always happy to listen to me on my good and bad days. I am so thankful to all of these faculty and staff members for helping to make my first year at Dickinson as memorable as it was!

I love memorizing the roles that actors and actresses have played in movies, TV shows or Broadway shows.

On being a third-generation Dickinsonian:

I never thought that I would come to the same school as my parents [Robert and Lori Kuhni Snyder, both of the class of ’91] and grandparents [James ’62 and Ann Smith Snyder ’65], but when I visited as a sophomore and again in my senior year, I knew that this was the perfect place for me. My parents are alums from the class of ’91 and I am the class of ’19—the class years just flip-flopped!

… Lin-Manuel Miranda, the creator and original lead of Hamilton. He truly is a genius and I would love to talk to him about how he gets his ideas. He is also starting to work more with Disney as a writer for the songs in Moana and Star Wars: The Force Awakens. Lin seems to be a very down-to-earth guy who genuinely cares about anyone he meets.

Getting accepted to Dickinson. On December 11, 2014, I got out of my car after driving home from school. My mom burst out of the door saying that Dickinson sent out the decisions. I remember standing on the driveway, shaking as I hurriedly logged into my account to find my acceptance letter. I only applied here, because I knew that it was my home.