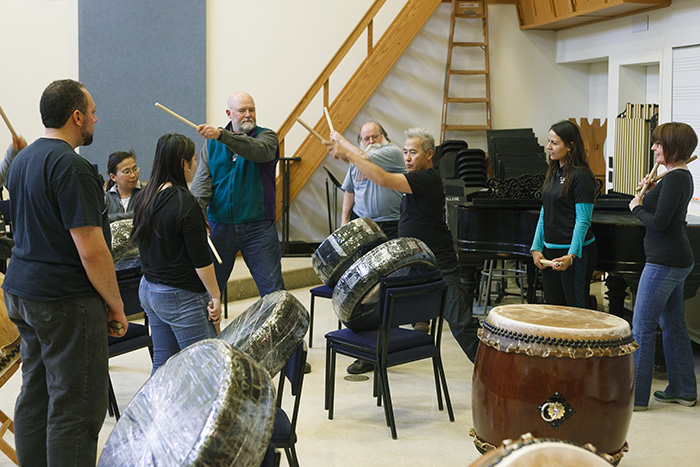 American musician Kenny Endo is a leading artist in Japanese drumming who brings a jazz musician’s ear and a ethnomusicologist’s sensibility to the craft. A few years after his artistic residency at Dickinson, Endo returned to campus to offer a view of Japanese culture, as seen through his distinctive, wide-angle lens.

Born and raised in California, Endo spent 10 years studying traditional drumming Japan, and he became the first non-Japanese national to receive master’s certification in classical Japanese drumming. He has performed extensively around the world for the past four decades, serving as a musical ambassador of Japanese culture and the arts. Endo also is a composer with an M.A. in ethnomusicology from the University of Hawaii at Manoa who has taught ethnomusicology and taiko drumming. He has served numerous artistic residencies, including one at New York’s Lincoln Center and one at Dickinson several years ago.

Endo’s most recent trip to the college is part of his current world tour, marking the 40th anniversary of his long and successful career. His visit, co-sponsored by the Department of East Asian Studies and the Bullard Music Studies Support Fund, included a taiko workshop, open to students, faculty and staff, and a concert in the Weiss Center for the Arts.

During the workshop, Endo emphasized the importance of technique in Japanese drumming—the way a drum is held, the angle of the mallet strike, and the position of the body when striking the drum all affect tonal quality and visual effect. His concert, which included performances with three fellow musicians, brought both Japanese-style and world fusion music into the spotlight, drawing from several folkloric traditions at once and incorporating taiko drums, the shamisen, banjo, ukulele, vocal music and more.

Asked how the workshop fit in to this cultural exploration, Hang said that while her study of East Asian culture is ongoing, Endo’s performance "highlighted core values and concepts of justice." The blend of traditional Japanese, rock, jazz and global-musical styles also "bridges cultures in a way that promotes peace," she added.