Traveling Through Space and Line 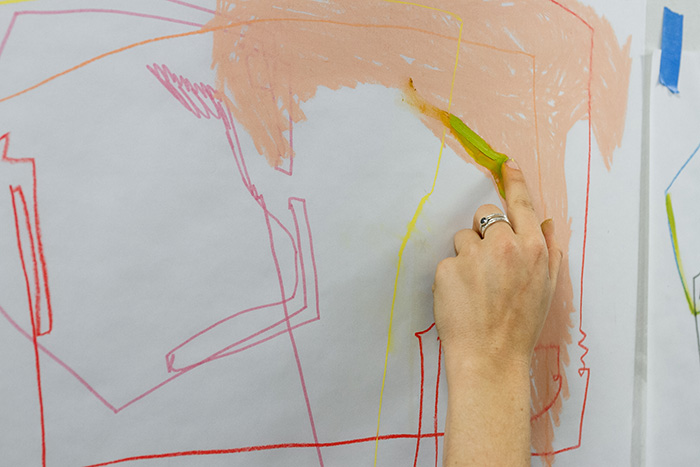 There’s a degree of nail-biting in the weeks and days leading up to one’s first solo show, as promising young artists like Carley Zarzeka ’15 put the finishing touches on a body of work that took months to create.

“In a way, you’re like a scientist in a lab,” says Zarzeka, a former art & art history major and the studio art program’s 2015-16 postbaccalaureate artist-in-residence, who unveiled her first solo exhibition March 8 in the Goodyear Gallery. “You make discoveries in the lab, and no one knows about them. You never quite know how people will react to your work until you bring it out into world.”

One week after her opening, Zarzeka can rest easy. Her solo exhibition, Causeways, is an auspicious start to a promising artistic career.

Zarzeka came to Dickinson with plans to major in international studies, but once on campus, she missed the hands-on art classes she’d taken in elementary and high school. “After I realized that I didn’t have to give anything up to be an art major—that I could still continue to learn and do research in those other fields—I made the change,” she says. “And I learned that I could bring what I learned in other classes into my work.”

The same was true for what she learned outside of class, as a student worker at the Dickinson College Farm, co-founder of the Dog House and as co-creator of a sustainable business plan for a product- or service-sharing app. And when senior year rolled around, Zarzeka joined her classmates in the Goodyear Studio to create a combined body of work that both fed, and was fed by, the breadth of their varied undergraduate experiences.

For Zarzeka, that meant a strong collection of 2- and 3-D works that explore the interplay between memory and time. After graduation, she expanded on that theme, building a body of more abstract work that focuses on the way lines create and frame our sense of space. Her solo exhibition, on view through April 1, showcases that recent work. 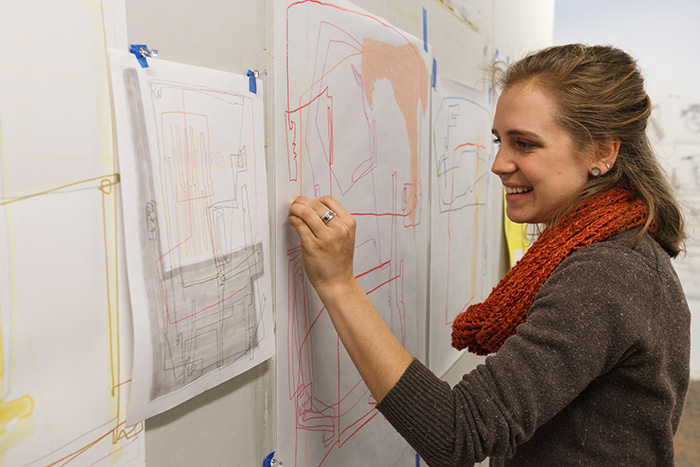 The exhibition is a hallmark of the postbac residency, a one-year position extended to one graduating studio art major each year. While postbac residents like Zarzeka work part-time serving as teaching assistants, guiding occasional art department tours and providing general office support, they also have full use of the college’s facilities, including a studio in the spacious Goodyear Building, and easy access to professorial guidance. They emerge from the residency with new perspectives, teaching experience and an impressive portfolio that includes a spring solo exhibition.

“It’s an amazingly supportive environment to work in, and the art department faculty have had their arms opened wide to me since I started here,” says Zarzeka, who will enter the M.F.A. program at the University of North Carolina-Chapel Hill in the fall. “But there’s also a lot of freedom. I’ve been able to make work for myself, rather than as part of a class, for a grade.”