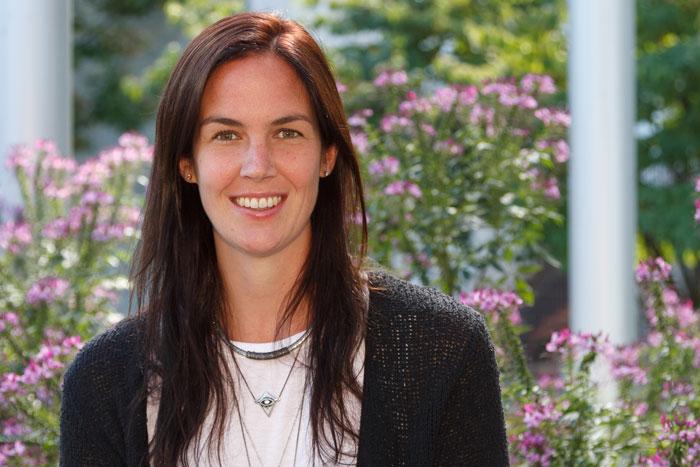 Lauren Porter ’06 is an assistant professor in the University of Maryland’s Department of Criminology and Criminal Justice who spends her time deep in quantitative and qualitative research on the mass incarceration epidemic in the U.S. When the former sociology major isn’t interviewing ex-inmates, you might find her doing ride-alongs with offenders for street-based behavioral research. Porter (with Chris Wildeman ’02) was recently back on campus to give a Clarke Forum lecture on mass incarceration. Read on to hear about her time at Dickinson and how a change in perception led to a change in career path.

My time at Dickinson taught me to think beyond just my own little world and to open my mind up to what was happening with other parts of the population and in other countries. In a more direct way, Susan Rose (Charles A. Dana Professor of Sociology, director of the Community Studies Center) was the one who recommended I go to grad school. I worked for a year after graduation, and I hated my job. And Susan said, "You always liked learning and sociology, so why don't you go to graduate school?" When I got to graduate school, I found that I was so much more prepared than other students in terms of the writing aspect. At Dickinson you're really forced to write well and write long papers and formulate arguments in strong and appropriate ways.

My favorite classroom memory was when Susan brought in four abusive husbands/boyfriends to talk to our class about their behavior and why they did it and what they were going through to change. They were in a program called Choices, and this was part of their rehab. It was very powerful and interesting. And on an unrelated note, I met Kevin Bacon when the Bacon Brothers played at the Carlisle Theatre. He was a jerk. Nevertheless that was pretty memorable.

What was your favorite activity while at Dickinson?

Probably the best times I had at Dickinson were on the softball field. I loved going to the field at the end of every day and being outside, throwing the ball around and joking around with my teammates and the coaches. That's what I miss most about Dickinson.

What sparked your interest in mass incarceration?

When I came to college, I thought I wanted to be an FBI agent, but my interest changed so that instead of wanting to "bust the bad guys" I started not thinking of them as bad guys and instead as people who had lived a different life and had grown up in a different environment than I had. And it really bothered me that they don't get many second chances. So freshman year I started volunteering at jails to help out with the kids and the families that came to visit the husbands and fathers in jail. I gradually got more interested in trying to figure out how mass incarceration affects individuals and their families.

What kind of professional challenges do you encounter day to day?

I love my job, even the challenges. I think they make it fun. The publication process can be frustrating, though. Papers take a long time to finish, and by the time I send one out I feel ready to be done, but then the review process takes a long time in its own right, and having to revise and appease all of the reviewers isn’t always fun.