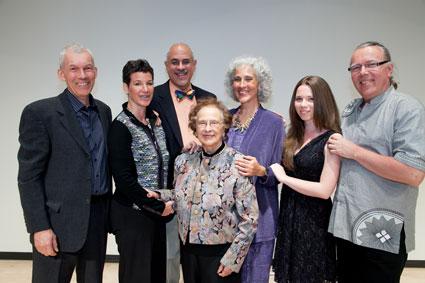 Patricia Shaw Iversen’s sons Patrick (far left) and Torkild and granddaughter Thera (far right) from Norway were present at the ceremony. In addition, family from the U.S. were also able to attend.

During a ceremony to award a posthumous honorary degree to its first-known black woman graduate, Esther Popel Shaw '19, President William G. Durden '71 issued an apology to her family.

In the 1940s, Popel Shaw encouraged her daughter and only child, Patricia Shaw Iversen, to attend Dickinson based on her own positive undergraduate experiences. Although Shaw was admitted, she was not permitted to live on campus and she chose to attend Howard University instead.

“There was an injustice committed by the college leadership decades ago against this family,” said Durden. “This action was plain wrong by any humane or moral standard. I wish to acknowledge publicly this wrong and apologize to the family members present on behalf of Dickinson College.”

Shaw Iverson was not well enough to travel to Carlisle from Oslo, Norway, to hear the apology or to accept the degree in her mother’s honor, but her sons Patrick and Torkild, and granddaughter Thera, were present at the ceremony.

Popel Shaw entered Dickinson in 1915 and commuted to Dickinson’s campus from her home in Harrisburg, Pa. She studied Latin sciences, spoke five languages, graduated Phi Beta Kappa and went on to become a leading Harlem Renaissance poet and a friend of famed black poet and playwright Langston Hughes. Shaw, whose first book of poems was published in 1934, played an important part in black literary history, using the written word to inspire readers to fight against prejudice. “She wrote about the central paradox of American history: the contradiction between American ideals of equality and freedom and the realities of black experience—slavery, oppression, segregation in Jim Crow America,” said Sharon O’Brien, James Hope Caldwell Professor of American Cultures. “She challenged her white readers and affirmed her black readers.”

“Esther Popel Shaw is among our finest Dickinsonians. She was a trailblazer,” said Durden. “Honoring her contributions to the arts—and more importantly, her character—in the presence of her beloved family will perhaps help us reconcile decisions influenced by the ignorance of her era.”

Shaw, who passed away in 1958 at age 61, was honored at a special ceremony titled, “Crossing Borders: A Celebration of Multiple Homelands,” which included an exhibit and a concert of works inspired by African-American spirituals, art and music. The performance featured texts by Shaw, set to selections from Duke Ellington’s “Sacred Concert.”

Also honored during the ceremony was alumna Carol Jones Saunders, class of 1962, who established Dickinson’s first endowed faculty directorship, and Sylvie Toux, who was installed as the first Carol Jones Saunders ’62 Faculty Director of the Dickinson program in Toulouse, France.