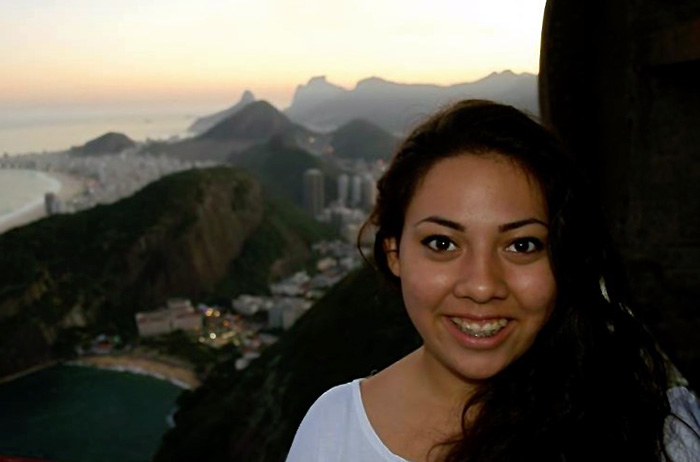 English major and Posse Scholar Janel Pineda ’18 was profiled in an L.A. Parent article about a Los Angeles writing program. She also is a gifted poet, and a video of her spoken-word poem about her experiences as a Latina on a college campus was highlighted in March 2016 in The Huffington Post and has received national attention. Below, she discusses her love of reading and storytelling, the need for greater diversity in literature, her time in Brazil and the poet with whom she’d like to break bread.

The Harry Potter series, for marking the beginning of my journey through the magic of words and stories; The Book Thief by Markus Zusak, for reminding me of the privilege it is to be able to read and tell stories; and Gloria E. Anzaldúa’s Borderlands/La Frontera: The New Mestiza, for helping me understand more about my own story and positionality as a Latina woman in the U.S.

My first publication in a WriteGirl anthology.

I am an English major because I am a reader, writer and believer in the power of stories to help us to better understand the human condition and the societies in which we live. Studying literature allows me to apply critical approaches from sociology, history, philosophy, etc. to my analyses of poems, novels and other literary works. This interdisciplinary approach allows me to continue the important work of studying race, gender, class and sexuality as they relate to current social-justice issues.

I wanted to attend a small liberal-arts college because I felt it would allow me to play a more active role within my campus community. I wanted to be at a school where I could develop my voice and where I felt my voice would matter. After meeting Posse Scholar Glenda Garcia ‘09 at WriteGirl, a creative-writing mentorship nonprofit at which I was interning, I learned more about Dickinson. I was drawn to Dickinson based on [Garcia's] stories of close-knit student-faculty relationships, incredible classes and student involvement in campus organizations.

In an Adirondack chair on the Academic Quad.

This past spring, Exiled Poetry Society put together a monologue show called “Collective Unmasking.” We all wrote poems about aspects of ourselves that we wanted to unmask, or reveal. For many of us, these topics were difficult to think and write about—let alone perform two nights in a row in front of hundreds of people in Mathers Theatre. Our collective pushed through and delivered a performance that was well-received by many members of the Dickinson community. Ultimately, I feel privileged to be part of a collective of writers and artists who are willing to be vulnerable with their stories and their craft.

… Pablo Neruda, who despised eating alone, and whose poem “El Gran Mantel” (“The Great Tablecloth”) addresses widespread hunger as it relates to the exploitation of the poor.

This past summer, I studied abroad in Brazil through a Dickinson program. One of the most incredible parts of the experience was being able to learn more about Brazilian culture not only through its samba and beautiful beaches but also through its gracious, hospitable and vibrant people.

My parents, who listened and supported me when I begged them to take me to Barnes & Noble instead of toy stores.

Be kind to yourself, and live lightly.

While I can’t be certain where I will be headed after Dickinson, I know I will continue writing poems, stories, articles, etc. As a Salvadorian-American writer, I am deeply troubled by the lack of proportionate representation of Latinx writers—and writers of color overall—in places such as the newsroom, on bookshelves and in school curricula. I am interested in furthering the progress of Latinx writers and writers of color not only through my own written work but also by giving back to my community. I want to continue the cycle of mentorship by being involved with nonprofit organizations dedicated to aiding and supporting young writers and artists.