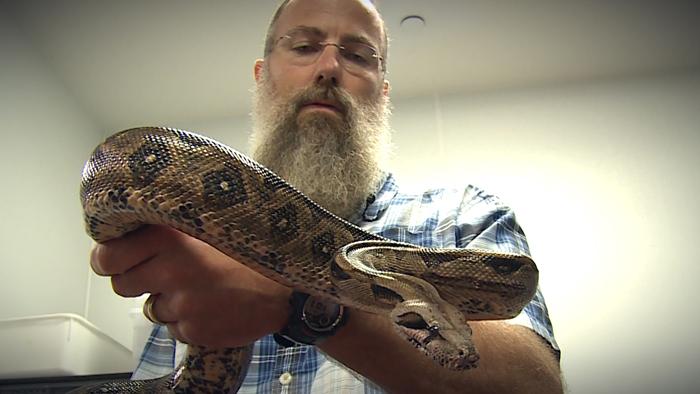 Snake constriction research led by Associate Professor of Biology Scott Boback is published in the Journal of Experimental Biology.

When a boa constrictor begins to squeeze its victim, it looks to be suffocating it, but a new collaborative study led by Associate Professor of Biology Scott Boback reveals that the snakes subdue their victims by shutting down the circulation and cutting off blood supply to the heart, brain and other vital organs, causing the victim to succumb rapidly rather than dying slowly by suffocation. The findings are published in the August issue of The Journal of Experimental Biology.

“We have been studying constriction for a number of years,” says Boback, whose earlier experiments measured the pressure exerted by snakes crushing dead rats and led to the discovery that snakes control constriction in response to their victims’ heartbeats. However, to find out what was really going on inside a snake’s victim, he had to measure blood pressure in living, anesthetized rats as they were squeezed. “It was not something that we took lightly, and we wanted to make sure that the animals [rats] did not experience pain or suffer,” says Boback, noting that the project proposal underwent a full review by the Institutional Animal Care and Use Committee (IACUC).

He and his colleagues, Emmet Blankenship, an Atlanta-area veterinarian, and Associate Professor of Biology Charles Zwemer—backed up by then-undergraduate researchers, Katie McCann ’11, Kevin Wood ’11 and Patrick McNeal ’11—inserted ECG electrodes and blood-pressure catheters into the rodent’s body before offering the sedated animal to a hungry boa constrictor.

The snake struck, aiming a bite at the rat’s head and coiling its body around the rodent as it began to squeeze. As the team watched the blood pressure and heart-rate data stream onto the computer, they were amazed to see the rat’s blood circulation shut down in a matter of seconds. “I remember being in the room, and the students were looking at the data in disbelief that it happened that fast. We could see the arterial pressure go down, the venous pressure go up, and we could see this right when the snake was doing it [squeezing],” says Boback. As soon as the rat’s circulation stopped and the oxygen supply was cut off, the team could also see the rat’s heart beating more and more irregularly. Boback suspects that without blood flow to the brain, any animal caught in the snake’s coils probably passes out in a matter of seconds, before other critical organs begin to fail.

Boback and Zwemer credit McCann, Wood and McNeal for executing the experiments with skill, precision and confidence. “Essentially, they performed vascular surgery,” Zwemer says, explaining that performing delicate surgery on a small rodent is analogous to “inserting a strand of cooked angel hair pasta into a similarly sized hollow rubber band in one attempt.”

“We provided the students with basic surgical techniques,” says Boback. “Toward the end of the semester, Katie and Kevin were essentially running the surgeries themselves with Pat backing them up. The fact that they could prepare the vessel, cut it halfway open, insert the vascular catheter, and sew it all up without complications was simply remarkable.” Those techniques, Zwemer adds, require “significant eye-hand coordination, mechanical intuition and the ability to think many steps ahead.”

McCann wrote the IACUC protocol as part of her honors thesis and knew as well as anyone the importance of surgical accuracy. “It was difficult initially to get a sense of the strength and pliability of the small rat vessels and how much force to use to secure the catheter without rupturing the vessel,” says McCann. “The surgeries took several hours and required a lot of concentration the whole time because the last steps were some of the most critical to ensure that we would be able to get data. Another tricky part was delicately inserting the catheter and trying to secure it well enough that it would not be dislodged while the rat was being constricted by the snake.” Now an M.D. and Ph.D. candidate at the University of Massachusetts, McCann says, “Doing these surgeries on rats has definitely made procedures on human patients—even pediatric patients—seem much easier!”

According to Boback, the boas provide a glimpse into the evolution of crushing behavior in snakes. He explains that ancient snake species that had not evolved constriction were probably restricted to capturing small meals that they could subdue easily. However, once the earliest boas had developed their quicker constriction technique for dispatching victims, they were free to scale up the size of meals, sometimes tackling animals that are even larger than themselves. “By understanding the mechanisms of how constriction kills, we gain a greater appreciation for the efficiency of this behavior and the benefit it provided early snakes.”

Kathryn Knight, Journal of Experimental Biology, contributed to this story.