Another Comfort Zone Bites the Dust 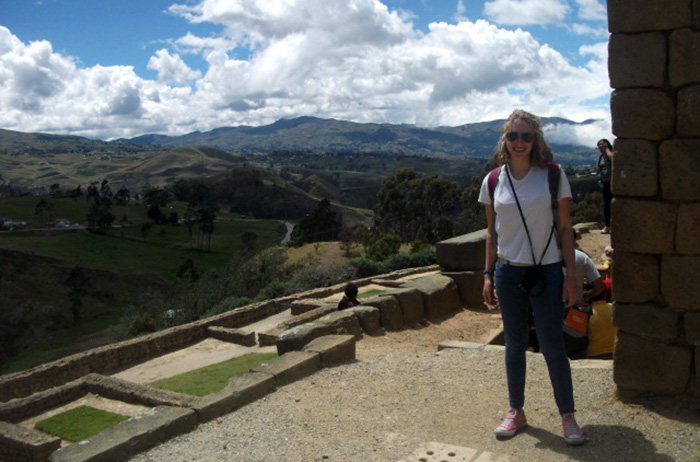 Last year, Rachael Smith ’16 founded a music organization, held two internships and three jobs, learned to direct a choir, earned the Weiss Prize for the Arts and launched into the core courses of her music-composition major. And she still found time to fill out our Student Snapshots questionnaire! Learn more about her whirlwind college career, on and off campus, and how she discovered the key to on-the-job satisfaction.

Music (composition), with a Spanish minor.

… a ballet teacher with a black belt in Kung Fu. I have achieved neither of these goals, but I still have lots of time in life.

I came to Dickinson for the full liberal-arts experience and spent my first year taking classes in multiple departments. I was interested in almost everything offered at Dickinson. One of these interests was music, so I decided to take a few music classes fall of sophomore year. After about a month, I knew that was where I should be and officially declared.

Each professor I’ve taken a class with has had an impact on my Dickinson experience, but the most impactful was Professor of Music Jennifer Blyth. I started her Music Theory class in the fall of my sophomore year, unsure about declaring the major. The first day, she started class just by talking to us for a few minutes very openly. She told us that music theory was hard and could be really boring, but that she didn’t want to “lose” any of us along the way. I had never been so happy on the first day of any class. Instead of jumping into the syllabus or grading policies, Professor Blyth made it clear that the point of this class was for us to learn music theory, and she was going to do her best to help us get there. I declared my major within a few weeks. She taught our class for three semesters, and her commitment to our education is the reason that I understand (and sometimes enjoy) theoretical music analysis.

I love being outdoors (I think this will surprise anyone who knows me as a student who lives in the library and other academic buildings), and I go camping every summer, and hiking much more frequently than that. Two summers ago I backpacked a 400-mile segment of the Appalachian Trail. This summer I will be working in the mountains of Andalusia, and I can’t wait to experience the nature there.

I interned at LitWorld in New York City last summer (2014). LitWorld is a nonprofit organization that uses the power of storytelling to combat illiteracy worldwide. I originally applied for the position because I was interested in nonprofit work, and I love working with children, which the summer interns got to do a lot. The intern team planned and instructed a summer camp program centered on literacy (LitCamp) in Harlem.

Through this internship, I learned …

… the workings of a nonprofit organization on a general level—what their fundraising campaigns look like, how the staff is organized and how meetings are held. From planning the camp, I learned organizational and educational skills that I applied to the set-up of Composed [a student songwriting program]. I also gained something from [witnessing] each staff member’s genuine passion for and dedication to the LitWorld mission. There was never an attitude that work was a drudgery or series of tasks; instead, there was a clear knowledge that the work being done was an important, ongoing mission. I hope to adopt that attitude in the future work that I do.

Getting through this past year! Since last year at this time I’ve had two internships and three jobs, started an organization (Composed), learned how to direct a choir and taken the real core classes for my major. It was a whirlwind of long days and busy nights, but I left my comfort zone behind and learned more than I ever have in the span of 12 months.

I’ve learned something valuable from each Dickinson experience. Recognizing the value of each experience and finding connections between them is more important than any one experience on its own.

As a result of my liberal-arts exploration, I’ve learned that life doesn’t move in a straight line. I used to think of college graduation as an ending point, at which I would have everything figured out and have a clear life trajectory. At Dickinson I’ve realized that my entire life will be a process of self-development, and there isn’t one huge goal that will complete that journey.