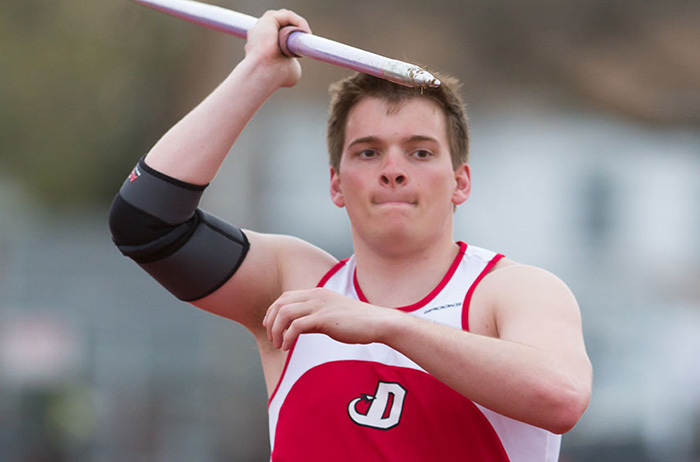 Peter Howard ’15 is a member of the track and field team (shot put, discus and javelin), a scholarship and fellowship recipient, and an accomplished pianist/vocalist with plans to become a surgeon. He discusses the courses, professor and experiences that placed him on track to Duke University School of Medicine; the book that fueled his interest in medical research; his internships in high-tech chemical formulation and cancer research; what his perfect world would sound like; and the life lessons that taught him that with hard work and integrity, you really can “have it all.”

Cancer: The Emperor of all Maladies by Siddhartha Mukherjee.

I have always been interested in chemistry, and at first, it was my only major. As I took more biology classes, I became enamored with biochemistry as well.

My father [Lindsay Howard ’82] introduced me to the school. I was looking for a small school with a well-defined campus, and Dickinson fit the bill perfectly. After getting to meet the science faculty here, and after seeing Rector, it was a no-brainer for me.

[Assistant] Professor [of Chemistry] Sarah St. Angelo. She is great, because she has the excitement for science that is common in academia and the realist practicality of a lab chemist, due to her previous career. This, combined with her upbeat attitude, love for teaching and ability to challenge students without overwhelming them, is truly impressive.

I have been playing piano since I was 4, and I love performing. I have performed at several Noonday Concerts while here.

… Sergei Rachmaninoff (with a translator, of course).

… everyone’s life would have its own soundtrack.

About my internships:
At the University of Pittsburgh Medical Center (UPMC) Shadyside Hospital: Because of my interest in oncology, my internships at UPMC were very appealing. I got the opportunity to complete real research in the cutting-edge field of cancer research, collecting and analyzing genomic data from tumor cells to determine causative mutations and possible targets for treatment, while also learning a great deal about the underlying science behind both what we were doing and what we were treating.

At August Research Systems: I worked in an aircraft-coatings formulation lab [August Research Systems] during summer 2012, formulating organic compounds that were used to coat U.S. government planes to protect them from weathering and from radar detection. I learned how research in such a field really works, and I was able to take part in the trial and error process, as well as take part in coordinating the use of nearly $500,000 dollars, allocated for use in purchasing lab equipment.

I’ll be attending medical school at Duke University, and I plan to eventually become a surgeon. My current interests are in orthopedics, sports medicine and oncology.

My parents. I learned the value of steadfast commitment to being the best that I can be, the value of kindness and compassion in the pursuit of my goals, and the importance of self-assured humility when those goals are accomplished. I know for a fact that I would not be where I am today without their love and support.