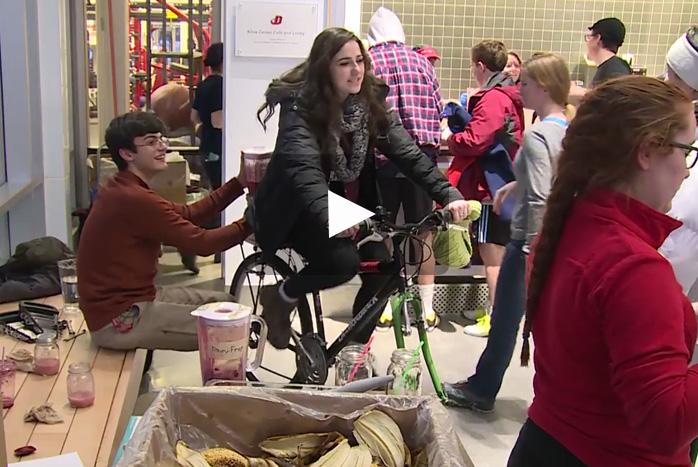 First, students developed The Peddler, a sustainable fair-trade-coffee cart on two wheels. Then they came up with a new initiative that blends sustainability, cycling and do-it-yourself culture in an ingenious and delicious way. The bike blender is a student-made contraption that runs on—you guessed it—bicycle power, offering a sustainable, fun way for students to get their smoothie fix.

Here's how it works: When the operator pedals, the back wheel spins and, in turn, spins a smaller wheel, connected to a shaft, which is connected to the blender. As the wheel spins, the blender’s blades turn, creating a smoothie with no electricity.

The bike blender was designed and constructed by students involved with the Handlebar, a student-run, on-campus bicycle co-op where Dickinson cyclists can learn how to build, work on and fix bicycles. According to member Mariah Murphy ’15, student volunteers worked on several prototypes before arriving on the final design. “We use it a lot to raise awareness about biking on campus,” she said.

“Any time you can get your exercise in [while you] make your own smoothie—you can’t beat that,” added Chris Cox ’15, who took a turn on the bike blender, when it made an appearance at the recent Food and Fitness Fest in the Kline Center.