Beyond the Bike Rack 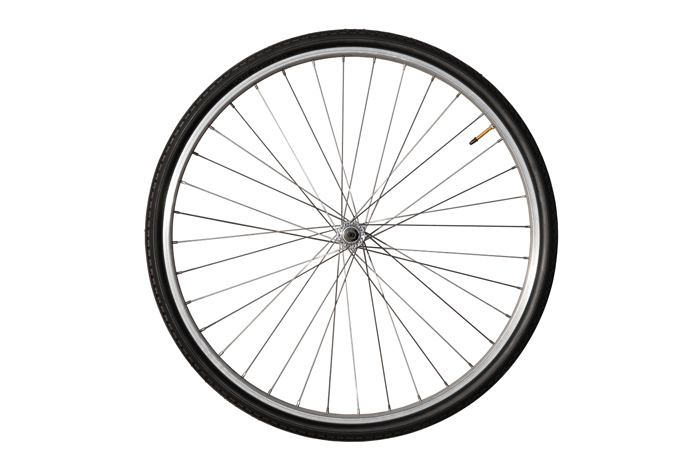 Whether you’re in it for fitness or for fun, whether your ride is rugged or retro, whether you’re going green or greasing gears, cycling is becoming the transportation mode of choice for an increasingly larger population.

“We have more biking now than I’ve ever seen in my 34 years at Dickinson,” says Lt. Joe Fazio in the Department of Public Safety (DPS), noting that the days of empty bike racks are over.

With anywhere between 300 and 400 bikes on campus on any given day, rack space is at a premium, even with the 25 racks that have been added in the last two years, according to Lindsey Lyons, assistant director of the Center for Sustainability Education (CSE).

Many sources are specifically pointing to millennials  as the drivers of change, including a 2013 report by the  U.S. Public Interest Research Group. The study found that “Millennials are more likely to consider forms of transportation beyond the car—the go-to option for many older Americans. They assess the best form(s) of transportation to get to their destination and decide to drive, take public transit, bike, walk or combine options depending on which makes the  most sense.”

The Dickinson community also is trying to determine what makes the most sense for a campus that has seen huge growth in its bicycling culture—from the sheer ubiquity of bikes to a genuine desire for sustainable transportation alternatives.

And while bike racks are a hot topic on campus, Tyce Herrman, projects coordinator for CSE and one of the driving forces behind the biking boom at Dickinson, says, “We’re leading the charge and moving beyond the bike racks.” In other words, there’s a new attitude about biking.

So the question becomes how to harness the energy and the volume into something sustainable. Enter the Bicycle Advisory Committee (BAC). “The BAC represents just about every aspect of cycling you can think of—skinny tires, fat tires, community, repairs, safety. Very few things run the risk of being overlooked or railroaded,” says Johnson.

Fazio agrees, noting that it was important to get all the right people around the table. The group comprises CSE, public safety, facilities staff, faculty members, students, student-development staff and local community members.

The committee’s task—develop a comprehensive bicycling plan for the college that will include support for initiatives already in place, generate ideas for new efforts that will enhance opportunities and connections with the Carlisle community, create evaluation plans to maintain accountability and provide education and incentives to encourage new cyclists.

And speaking of initiatives already in place, DPS has had officers on bikes for 10 years, and the office runs the Red Bike program, which began in 2007 and allows members of the campus community to sign out a bike for a few hours at a time.

The college also collaborated with the Carlisle community in 2010-11 on the Road Diet, which reduced the number of vehicle lanes in town and added five-foot-wide bicycle lanes on each side of High Street—a move that has had mixed reactions from active bikers. Some feel that safety for riders is still an issue, while others consider it a step in the right direction.

“It’s a mini-Copenhagenization attempt,” says Andrew Connell, director of user services and lifestyle bike commuter. “But Copenhagen really has it right. Every year, 10 percent more of the city streets there restrict car traffic.”

While Central PA won’t be looking like Copenhagen any time soon, the town-gown connection is imperative to future success, says Herrman. “Biking is not just a campus activity—it is embedded in the community. If the surrounding community isn’t bike friendly, it limits what we can do.”

At the same time, Dickinsonians are doing a lot with a little. The Handlebar bicycle co-operative, started in 2011 by CSE with support from the Idea Fund, has become a major outlet for bike enthusiasts. It collects donated parts and unwanted cycles and rebuilds them as Green Bikes, which sport a distinctive green fork and are available for students to rent by the semester.

And it’s a model that works. The Handlebar’s second-in-command, Drew Afsahi ’16, came in to build a bike and never left. It’s a frequent occurrence for students to stop in at the modest workshop below Davidson-Wilson residence hall  and just keep coming back for more, both as mechanics and return renters.

“I’ve always loved working with my hands and experimenting,” says Handlebar manager Mariah Murphy ’15. “My dad was an airplane mechanic, and in my family, you fix things yourself. At The Handlebar, we teach people how to  fix it so in the future, they can do it themselves.”

Murphy hopes that the affinity among The Handlebar volunteers and Green Bike riders will propel the effort forward. “People are asking about riding lessons, which we’re going to be offering,” she says. “We’re also looking at getting bike pumps installed outside and, of course, more bike racks.”

Beyond campus and town, the Cumberland Valley offers great trails for Dickinsonians interested in extreme riding. Mountain bikers, long-distance and competitive cyclists are finding like-minded riders and are eager to build out the networks for developing that critical mass.

Johnson is an active voice on a Biking at Dickinson list-serv and has led mountain-bike clinics. “This is a mountain- bike mecca,” he says. “There are tens of thousands of acres great for riding right outside our back door. There is tremendous potential.”

Tyler Riegel ’14 and Nick Shewell ’14 are eager to see interest and participation grow, having launched a cycling club this spring.

Herrman is building partnerships off campus, working with the Bike South Central PA Regional Advocacy Group, the Cumberland County Parks & Recreation Department and the Safe Rides to School Program at Mooreland Elementary. “It’s about creating a bike advocate network in Carlisle,” he explains. “We need a broad coalition. There are unique challenges and opportunities in our region. If we can make our region better, it’s better for all the institutions and communities in it.”

Community is a key word in all of this—it takes many spokes to support a wheel.

“I want to be part of a community where biking is a major part of the lifestyle,” says Johnson. “There are studies on the tremendous impact regular biking can have on your overall outlook on life and happiness. I’ve seen it transform people’s lives.”

View a gallery of the biking portraits featured in the print issue, along with additional images of Dickinsonians on two wheels.

Read more from the spring 2014 issue of Dickinson Magazine.