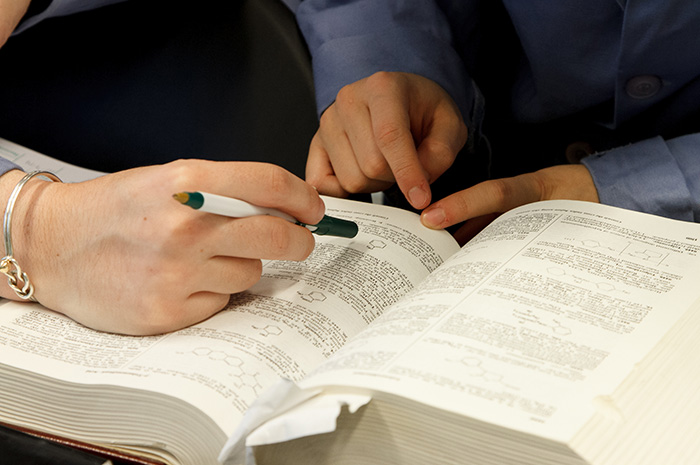 The campus community is about more than the buildings that dot the grounds and the individuals who populate them. It’s also about the collective life that they bring to those spaces—a renewable concoction of scholarly and creative expertise, inspiration and discovery that students and faculty members generate and share.

Until recently, those energies were easily felt in the college's learning, working and meeting spaces, but not so readily visualized; to gain a true sense of the breadth and character of Dickinson's current intellectual life, you'd need to visit the college's archives. Not so today.

Introducing Dickinson Scholar, an online institutional repository launched last spring, that indexes and stores individual materials and collections by Dickinson faculty and students within a global network accessible to search engines like Google and Google Scholar. Through it, senior theses; faculty papers, articles and presentations; art-exhibition catalogs; digital files and other submitted works are bundled and indexed, along with other institutional collections within the system, as part of an open electronic collection of original Dickinsonian thought.

“It definitely gives some value to all of the work I did in my senior year,” says Caitlin Moriarty '13, whose thesis on the electoral process in Putin’s Russia has been downloaded more than 200 times so far. “And it’s been interesting to see how [the collection] has grown so quickly.”

Dickinson Scholar is the result of concentrated cross-departmental discussion and research. After signing a contract for a hosted repository system during summer 2013, the Waidner-Spahr Library worked with faculty members and colleagues in Academic Affairs, Academic Technology, and Marketing & Communications to design, name and test the system. Last winter they solicited faculty submissions, obtaining publisher permissions whenever necessary; they also asked recent honors graduates to share their theses via the repository.

“In short, it takes a lot of coordinated effort by people in various areas of the college to ensure that everyone’s needs are well met,” says College Archivist Jim Gerencser ’93, who spearheaded the project. He and his team uploaded the first batch of faculty papers and class of 2012 and ’13 honors papers this past spring; class of 2014 honors papers were uploaded in July. According to Gerencser, 12 papers were downloaded more than 100 times in the first five weeks alone, and more than 2,000 times by the start of the fall semester.

Karl Qualls, professor of history, was the first faculty member to submit an article; today, approximately a dozen of his works have been uploaded, and three have been downloaded more than 125 times. His uploaded papers include recent works as well as papers written within the past decade, when most authors and journal editors gave little thought to the possibilities that digital publication presents.

At the time of this writing, his paper, “Imagining Sevastopol: History and Postwar Community Construction, 1942–1953,” published within Dickinson Scholar in English, Russian and Ukranian, is the most-downloaded of the batch, with more than 200 full-text views.

“More people have seen my work [via Dickinson Scholar] than have read it in any one of the traditional journals I’ve published in, including some people who don’t have access to those journals,” says Qualls, who estimates that while the majority of Dickinson Scholar readers hail from the U.S., approximately 10% of the papers are downloaded in Russia, the Ukraine and the U.K.

For the student authors, the potential readership differential is even greater. Of the 24 honors graduates from the classes of 2012 and 2013 who gave permission to deposit their work in Dickinson Scholar, the full text of their papers has been downloaded a total of 1,778 times in the first seven months alone. The top-five downloaded theses among those two years delve into medieval & early-modern studies, political science, women’s & gender studies, English and biology.

Of the 12 honors graduates from the class of 2014 who gave permission to deposit their work in Dickinson Scholar, the full text of their papers have been downloaded a total of 335 times in three months. The top-five downloaded honors papers by class of 2014 members hail from the environmental science/environmental studies, political science, classical studies, psychology and Spanish & Portuguese departments, respectively (the top-downloaded student papers of all time are Emily Bowie ’14’s analysis of alternative deworming treatments for sheep and Christopher Striker ’13’s paper on Chaucer and Boccaccio).

Moriarty, who majored in Russian and political science, watched the collection take shape last year while working as the Friends of the Library Intern. She’s since enjoyed browsing through Dickinson Scholar to read professors’ and peers’ works.

“I think it is great that in addition to having access to Dickinson's own institutional repository, we also have access to the repository of everything held by other schools [within this system],” she says.

“And this is just the beginning,” adds Gerencser, noting that plans are underway to share other kinds of scholarly and creative output, such as original writing and audio and visual representations of visual art, musical compositions, plays and performances. “The products of all of that creative and scholarly work is worthy of sharing with a global audience.”