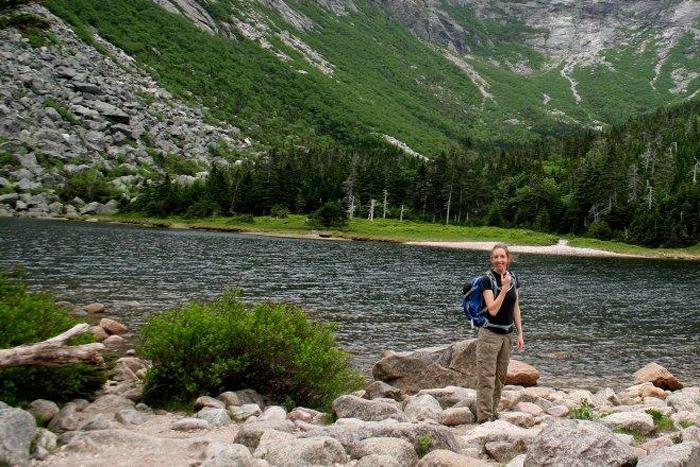 Assistant Professor of Environmental Studies Kristin Strock at one of her research sites, Baxter State Park in Maine. Photo courtesy of Kristin Strock.

New findings by a Dickinson professor and a team of researchers offer something increasingly rare in the world of environmental science—good news. Their research, which tracks three decades of data, suggests that environmental regulations introduced in the 1990s to combat the effects of acid rain have led to the accelerated recovery of more than 80 northeastern U.S. lakes once devastated by the largely man-made phenomenon.

Limnologist and lead researcher Kristin Strock, assistant professor of environmental studies, says the Environmental Protection Agency’s (EPA) Clean Air Act, which was introduced in 1970 to combat air pollution, and its 1990 amendment, which was implemented in 1994, has resulted in a dramatic turnaround for lake health and recreational tourism.

“While we see a lot of emerging issues in science that can suggest a bleak outlook for various ecosystems, this is a story where policy is resulting in environmental recovery,” said Strock.

According to the EPA, acid rain refers to wet deposits in the atmosphere such as rain, snow, fog and mist as well as dry deposits such as dust and smoke that contain high amounts of nitric and sulfuric acids. While acidification is caused by natural sources such as volcanoes and decaying vegetation, it is largely man-made sources, including emissions of sulfur and nitrogen oxides associated with fossil-fuel production, that are significant contributors to atmospheric acidification.

Strock and a team of researchers at the University of Maine, University of New Hampshire and the James Sewell Company, studied a staggering 30-year collection of data samples from 84 acid-sensitive lakes that are part of the EPA’s long-term monitoring network. The lakes are located in Maine, New Hampshire, Vermont, Massachusetts, Rhode Island, southern New York and the Adirondack Mountains of New York.

Their findings, published in the journal Environmental Science & Technology, show that the lakes are recovering from acid rain more rapidly now than they did in the 1980s and 1990s. Total emissions of sulfur and nitrogen in the U.S., which are regulated by the U.S. Clean Air Act, decreased two times faster from 2000 to 2010 compared to the previous decade, and nitrate concentrations in lakes declined for the first time since monitoring began. In addition, sulfate concentrations in lakes declined at more than double the rate in the last decade.

“Ongoing recovery in response to these legislative acts is a measure of success for the EPA,” says Strock, adding, “This is really good news for the region’s lakes.”

Researchers say the data also provides insights into the study of emerging environmental issues, such as the effect extreme weather has on lake health in a climate-change context. “Acid rain is not the only thing that has changed in the last decade. For example, the Northeast has experienced some of the greatest increase in the frequency of extreme rain events. As emissions continue to decline, we are starting to consider how these long-term monitoring data can help us understand other large-scale drivers like climate change,” says Strock, who is studying dissolved organic carbon (DOC), which gives water a brown tea-stain color. She will soon publish findings on her DOC research.