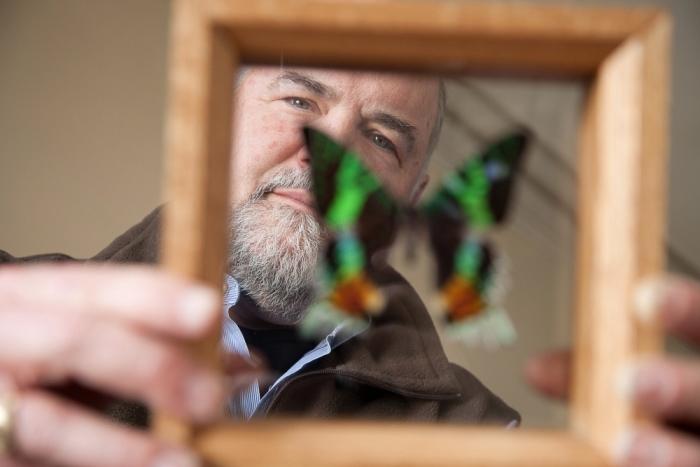 Between literature and science lies the fertile world of nature writing

They look at questions connected to humans’ relationship with nature (are we a part of it or distinct from it?), the disposition of nature (is it benign or destructive?) and how and why we should preserve nature in the face of climate change and the unstoppable march of humanity.

It’s an intellectual handful, so it’s not surprising that Katie Mooradian ’16 (psychology, German) feels as if this unique cross-listing of Environmental Studies 111 and English 101 might be a higher-level class in disguise: “Considering it’s a 100-level course,” she says, “I’ve been impressed with not only the breadth of knowledge but also the depth.”

Ahead of the curve

The impressive dimensions of the course originate with its architect, Ashton Nichols, professor of English and environmental studies and the Walter E. Beach ’56 Distinguished Chair in Sustainability Studies, who has been living at the intersection of nature and literature since he was a child.

“Growing up, I always had strong interest in and concern for the natural world,” he says. “But I’ve always also been interested in literature and language, so when I became a professor, it was English that attracted me as a disciplinary study.”

With nature writing, and the larger environmental humanities movement, Nichols found his sweet spot. And while in recent years other colleges and universities have been adding courses in the field of study, it’s one that Dickinson students have now been exploring through this course for over two decades.

Sam Bogan ’16 (biology) says American Nature Writing has brought together his interests in science, literature and sustainability in a “balanced and clear way,” but that doesn’t mean he’s been lulled into complacency. “Despite that harmonious effect,” he says, “it’s also challenged some of my own values and ideologies concerning subjects such as conservation, success and travel.”

Nichols says the challenges presented by the course rarely lead to uniform responses, as the syllabus—which includes works by Bill McKibben, Henry David Thoreau and Nichols himself—forces students to debate internally where they stand on a vast array of issues.

“I hope students emerge not with single-minded, narrow-minded ways of viewing these questions,” he says, “but with a broader palette of possible questions that they could bring to the literature they read and the environmental issues they confront.”

With the focus not on strictly scientific works, Mooradian appreciates teasing out the writers’ messages from their often poetic, allusive prose. “There is something really powerful about conjuring your own perception of the metaphor, prose and imagery you are being presented with,” she says.

These dimensions might be simply intellectual conversation pieces if left unexplored and unchallenged. The process of unpacking it all and making something useful is what Bogan sees as one of the course’s, and its writers’, more powerful traits.

“The progress that comes from science is generated through those acting upon scientific findings,” says Bogan. “The great American nature writers we’ve read in class do just that. The wealth of ecological, natural history, evolutionary and chemical knowledge that writers such as Rachel Carson, Aldo Leopold and Henry David Thoreau understood before writing their greatest works is what allowed them to inspire change.”

Through this interdisciplinary approach, Nichols hopes to instill in his students what Thoreau—whom Nichols refers to as the foundational element of the entire genre—has been instilling in readers for more than 150 years.