Dickinson’s endowment ended fiscal year 2014 (July 1, 2013, through June 30, 2014) at a record high of $436 million. This record high resulted from another strong year of performance in fiscal year 2014, with investment returns of 14 percent for the one-year period, net of all fees and expenses.

Since 2004, the endowment has yielded an average annual investment return of 8.9 percent. This means that, thanks to a sound investment strategy, the endowment has outperformed the S&P 500 and Dickinson’s strategic goal of spending plus inflation (the Consumer Price Index plus 1 percent), a key metric in attaining intergenerational equity.

During that time, Dickinson also has regularly reported top quartile performance in the National Association of College and University Business Officers (NACUBO) Commonfund Study of Endowments and reported 10-year returns in the top 6 percent of the 510 institutions reporting to NACUBO in 2013.

As high as the rate of return has been, it’s important to note that the endowment is not managed for short-term gains, but rather for long-term growth. The endowment is managed to maximize annual returns over rolling 10-year periods while adhering to risk parameters to avoid annualized shortfalls relative to peers. Accordingly, when you examine how the endowment has performed throughout the last 10 years you’ll see steady growth despite losses in the turbulent down market of the 2009 fiscal year, which were managed to be less significant than those of our peers.

HOW THE ENDOWMENT FUNDS THE DICKINSON EXPERIENCE

Every endowed gift provides permanent funding for a college priority. From making this priceless education affordable to helping recruit and retain top faculty and supporting innovative research, the endowment’s impact can be seen all across campus.

Each year Dickinson uses 5 percent of the endowment’s prior 12 quarters’ average to support the budget and restricted funds so that we can balance today’s needs against tomorrow’s. Dickinson is committed to this disciplined approach to ensure that we never steal from the future to fund the present.

As impressive as the endowment’s current total and high rate of return are, it’s not enough. As demographic shifts and the rising cost of higher education continue to increase the need for financial aid, and as new technologies and new fields of study continue to increase the need for new faculty, resources and facilities, Dickinson will need to grow its endowment significantly.

Though we are clearly outperforming many of our peer institutions, a quick scan of the higher-education landscape shows that many of the institutions with which we now compete for students have far larger endowments. 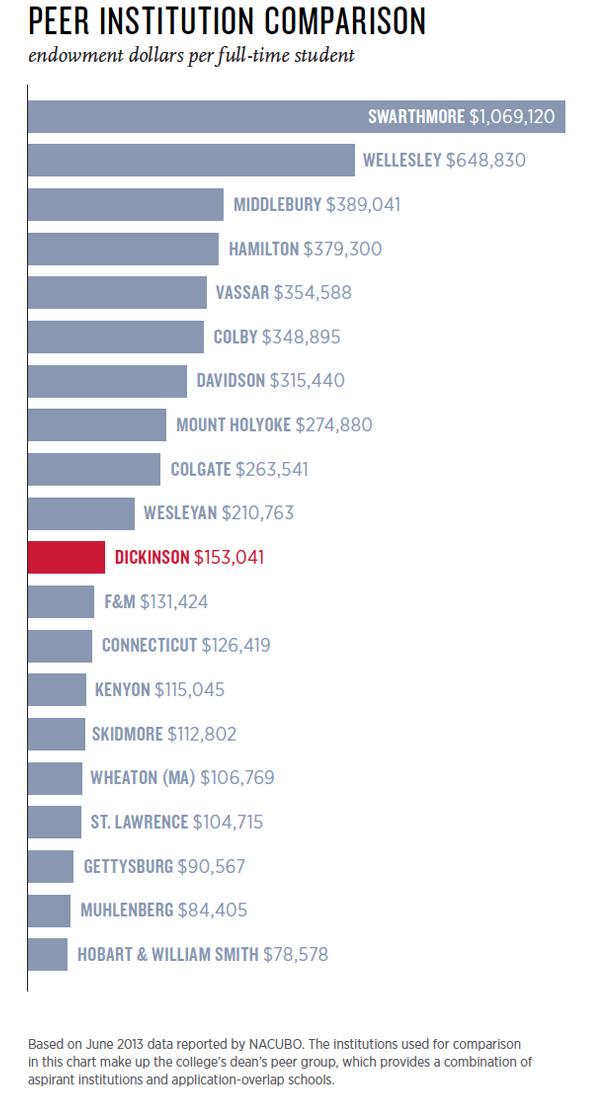