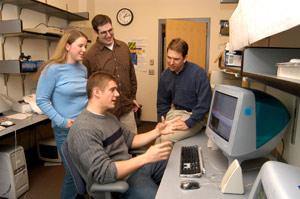 Jennifer Blyth - traveled to Toulouse for rehearsal time for an upcoming performance, and to Munich for an audition with the Munich Chamber Orchestra.

Grant Braught - "An N Step Algorithm for Receiving a Ph.D. in Your Spare Time: Step 9"

Barbara Diduk – will be further developing the work begun during her Kecskemet (Hungary) artist residency in June 2001.

Lynn Helding –attended the University of Iowa’s summer Vocology Institute (SVI) at the Denver Center for the Performing Arts in Denver, Colorado.

Etsuko Inoguchi - attended an Oral Proficiency Interview (OPI) Workshop organized by the American Council of the Teaching of Foreign Languages, where teachers of foreign languages learn to test and rate the learner's oral proficiency through face-to-face interviews.

Christophe Ippolito – attended an Oral Proficiency Interview (OPI) Workshop organized by the American Council of the Teaching of Foreign Languages, where teachers of foreign languages learn to test and rate the learner's oral proficiency through face-to-face interviews.

Pamela Nesselrodt –participated in a Summer Institute hosted by the Harvard Graduate School of Education in Cambridge, Massachusetts, titled “Connecting the Mind, Brain, and Education: Exploring New Connections and Promising Possibilities in the Fields of Cognitive Science, Neuroscience, and Educational Practice.”

Brian Pedersen –traveled to Davos, Switzerland, to participate in the International Conference on Forest Dynamics and Ungulate Herbivory.

Karl Qualls –attended a 10-day seminar on the Concentration Camp System at the Center for Advanced Holocaust Studies in Washington, D.C.

Yvette Smith - "Typography in Paris" - Continuing the comparison of Lyon to Paris as sites of the material production and culture of texts from the late Medieval period to early print culture, she planned a series of informal sessions and study in Paris relative to the history of the book.

John Henson – Publication
Costs for page charges, color figures, and reprint charges for the article “Wound Closure in the Lamellipodia of Single Cells: Mediation by Actin Polymerization in the Absence of an Actomyosin Purse String,” in the journal, Molecular Biology of the Cell.

Windsor Morgan - Publication
Presented results of analyses of observations of the X-ray source 2A 1704+241 with the ROSAT Position Sensitive Proportional Counter (PSPC) and the High Resolution Imager (HRI). 2A 1704+241 was first associated with the M-giant star HD 154791 based upon observations with the HEAO 1 SMC and the Einstein IPC and analysis of a spectrum of HD 154791 obtained with the International Ultraviolet Explorer.

Carol Magee - Dissertation
"Representing Africa? American Displays of African Material Culture in the United States in the 1990s" - This dissertation explores the production of knowledge about Africa by U.S. museums in the 1990s. As the primary means by which most Americans come into contact with African cultural products, exhibitions are important sites for the constriction of meaning about Africa and its peoples.

Andrew Rudalevige – Publication
Indexing charges for his book Managing the President’s Program, which was published in the summer of 2002

Yongyi Song – Publication
Publication subvention for photocopying, indexing, editing, and translation of the book The Bibliography of the Chinese Cultural Revolution Database, which he has edited.

Minglang Zhou - Publication.
Editing a book on the theory and practice of language policy in China for publication in late 2002 or early 2003.

Ashton Nichols - Reassigned time-spring 2002
*Romantic Natural Histories: Poetry and Science from Erasmus Darwin to Charles Darwin* -- Recent emphasis on ecological literature reminds us that our contemporary concern for the natural world has its roots in the natural history of the nineteenth century. A specifically Romantic natural history links "animated nature" to what Coleridge calls "the one Life within us and abroad" (1796) and Charles Darwin will describe by saying that "all the organic beings which have ever lived on this earth may be descended from some one primordial form" (1859). Houghton Mifflin has contracted with me to prepare such an anthology by June 2002. This anthology of writings will be a useful addition to the New Riverside series.

Blake Wilson - Reassigned time-spring 2002
To work on a group of projects related to a planned book on “Music in the Culture of 15th-century Florence.”

Marc Papé – Reassigned time fall 2002
To work on a second dissertation, titled “Hope and Impediments of Democratic Transitions in Francophone Africa,” in the Political Science Department of Florida State University.

Kim Rogers – Reassigned time fall 2002
To work on the final manuscript of a forthcoming book, Life and Death in the Delta: African American Narratives of Violence, Resilience, and Social Change.

Beverley Eddy – Scholarly Project
This project included a month-long research trip to Vienna, Austria, and Zurich, Switzerland, in order to do background investigation for a biographical/literary study of the Austrian Felix Salten.

Alison Hirsch - Scholarly project
"Hannah Penn and Other Quaker Women Who Traveled to Pennsylvania" - This project investigates the lives of Hannah Penn, acting proprietor and Governor of Pennsylvania from 1713-1726, and other English Quaker women who visited or immigrated to Pennsylvania in the 17th and 18th centuries, analyzing their experiences as immigrants and their role in the creation of British America's first self-consciously pluralistic society.

Wendy Moffat - Scholarly Project
For research on a chapter of a gay cultural biography of modern British novelist, E.M. Forster: travel to Hartland, VT and Ridgefield, CT, to conduct interviews with two artists who befriended Forster during his visits to America in 1947 and 1949.

Sharon Hirsh - Creative project
Research trip to the National Library of Medicine in order to do final research and acquire photographs related to the chapter on "The Sick City" for her book Symbolism and Modern Urban Society. This research would include additional medical information for the three diseases discussed (in relation to late 19th century art) - degeneracy, tuberculosis, and syphilis.

Susana Liso - Scholarly Project - "Untold Histories: A Documentary on the Sandinista-Miskitu Conflict in Nicaragua" - A 45-minute film that is designed to promote an awareness and understanding of the history, culture, and daily reality of indigenous communities on the Atlantic Coast of Nicaragua. This is a joint project with faculty from several other U.S. universities and additional funding will be obtained from other sources.

Blake Wilson – Scholarly Project - traveled to Florence, Italy, to work with a professional paleographer on his project, “The Medici as Patrons of Music – The Evidence of Their Letters in The Florentine Archives.”

John H. Henson/Sarah Kolnik/Heidi Murray -- The Role of the Cytoskeleton in the Cytotoxic Functions of Sea Urchin Coelomocytes

Sharon Stockton/Katie Ginn -- Writing about Rape: The Economics of Fantasy

William Bellinger - "Economic Impact of Dickinson College on Carlisle, PA, and Economic Impact of the Arts in South Central Pennsylvania "- Undertaken with the participation of members of the Economic Analysis of Policy class in the spring of 2002, this represents an update and expansion of a study completed in 1995.

Kirsten Guss –.Attended the Developed Biology Teaching Workshop and Laboratory hosted by the Darling Marine Center of the University of Maine.

Lynn Helding - Attended the Annual Winter Workshop (University of Arizona) sponsored by the National Association of Teachers of Singing.