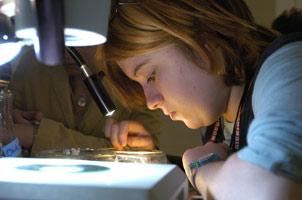 Neil Diamant/Kimberly Gabriel for a project that explores the nature of patriotism and rights consciousness in China.
Steve Erfle/Douglas Fryling for a project which involves creating interactive learning materials that help students learn economics.
Amy Farrell/Gretchen K. Mielke for research and writing of Fat America: A Cultural Study of Stigma, Weight Loss and the Fat Acceptance Movement.

Heather Merrill – Fall 2004 - Support of her pre-tenure sabbatical project during Fall 2004, to complete final editorial comments on her first book manuscript, and work on two other long-term projects. She plans to write a funding proposal to conduct an ethnographic study of spatial politics in San Salvario, a central Turin neighborhood which has become the site of struggle between migrant and Italian residents, and to begin research on the emergence of the concept of race from the Italian Fascist period to the present.
Marc Papé – Spring 2005 - Support of his pre-tenure sabbatical project during Spring 2005, “Slow Death,” “Sudden Death”: Can the Ivory Coast survive the Tragic Fate of Emerging Democracies? He plans to do research on the Ivory Coast and the political conflict therein by evaluating the debate between “primordialists” and “instrumentalists/constructivists” and democratization initiated a decade ago. He anticipates sharpening his arguments on these subjects and transforming them into material to submit for peer-review.
Michael Poulton – Spring 2005 - Support of his pre-tenure sabbatical project during Spring 2005, “Stories from Within: Narrative Reinforcement of Organizational Values.” He plans to further develop a text used in Comparative Business Ethics (IB&M 300K) into a publishable text, and to do additional research on narrative reinforcement of organizational values, continuing the research initiated in preparation for a Freshman Seminar he will be teaching in Fall 2004.
Adrienne Su – AcYr 2004-05 - Support of her pre-tenure sabbatical project during Academic Year 2004-2005, when she plan to work on a third book of poems, developing themes addressed in her newest work on family and motherhood, race and American identity, while considering the changing roles of women (American, Chinese-American, and Chinese). She will be traveling to Provincetown, RI, to spend two weeks in the Returning Residency Program at the Fine Arts Work Center.

Michael Heiman - to cover your half of the cost for a colored map for a co-authored manuscript, “Power to the People: Electric Utility Restructuring and the Commitment to Renewable Energy,” which has been accepted for the March 2004 issue of the Annals of the Association of American Geographers.
Roberta DiCarmine - dissertation expenses – “Cinematic Images, Literary Spaces. The Presence of Africa in Italian Cinema and Italophone Literature.”
Lucile Duperron - dissertation expenses – “The Role of Focused Input on the Acquisition of Tense and Aspect by L2 Learners of French.”
Philip Earenfight – publication to cover expenses associated with the purchase of photographs for publication as part of his article “Catechism and Confraternitas on the Piazza San Giovanni,” in the Journal of Religious History in the summer of 2003.
Beverley Eddy - publication - subvention fee associated with the publication of her book entitled Evelyn Schlag: Readings of Text
Wendy Moffat - to cover the cost of reproductions of photos from E. M. Forster papers at the Cambridge university Library.
Brian Pedersen - expenses for 50 reprints of his article, “The influence of canopy gaps on overstory tree and forest growth rates in a mature mixed-age, mixed species forest,” published in Forest Ecology and Management.
Brian Pederson – publication - to cover page charges for his article “Effects of white-tailed deer herbivory on forest gap dynamics in a wildlife preserve, Pennsylvania USA,” in the Natural Areas Journal.
Marion Picker – publication - to help cover the subvention fee associated with the publication of her book entitled Der konservative Charakter: Walter Benjamin und die Politik der Dichter.
Robert Pound – publication - to cover the costs for reformatting and standardizing two hand-written scores into a music-printing computer program.
Begona Toral – dissertation expenses - "Towards a Politics of Cultural Identity in the Narrative of Four Caribbean Women Writers: Rosario Ferré, Nicholasa Mohr, Mayra Montero and Cristina García."
Latifah Troncelliti – publication - to cover formatting and indexing costs for her manuscript, The Artisan and The Scholar: Two Parallel Realities in the Italian Quattrocento.

Neil Diamant - organization of "Symposium on Socioeconomic Rights and Justice in Asia," funded by the Freeman Foundation, to be held at Dickinson, Spring 2004.
Amy Farrell – to write the middle section of Fat America: A Cultural Study of Stigma, Weight Loss, and the Fat Acceptance Movement, entitled “Taking It Off: Dieting and Body Size Reduction.
Heather Merrill – to complete a book manuscript that expands her dissertation research and writing about immigration, race and inter-ethnic feminist politics in Northern Italy.
Wendy Moffat – to pursue ongoing research toward a gay cultural biography of the novelist E.M. Forster and to fulfill responsibilities associated with the presidency of the Associated Departments of English.
Susan Perabo – to write new stories to publish in magazines that have been soliciting her work, with the ultimate goal of finishing a new book of stories for possible publication at Simon & Schuster.
Harry Pohlman – to work with student, Jared Mellott, on a new edition of his three-volume constitutional law series, which Rowman and Littlefied has just offered to publish.
Alberto Rodriguez – To research and prepare an essay on Cuban philosopher Enrique Jose Varona’s Con el eslabón, to present at the July 2004 meeting of the Associación Internacional de Hispanistas at the Instituto Tecnológico y de Altos Estudios de Monterrey, México.
Kim Rogers – to fulfill responsibilities as President-Elect of the national Oral History Association.
Cindy Samet – to customize and test replacements for the research equipment destroyed in the flood in the Althouse Chemistry Building this past summer, in preparation for summer student-faculty research.
Karen Weinstein – to complete a series of journal articles on skeletal morphology and climatic adaptations in human prehistory and nonhuman primates. She plans to complete data analysis and writing of at least two of these manuscripts to submit to peer-reviewed biological anthropology and primatology journals.
Julie Winterich - to conduct 10-15 in-depth interviews for her book manuscript, From Biology to Culture: Menopause, Sex, and Hormone Drugs; to draft a journal article for submission to Signs or Social Problems, and to finish a draft of the book manuscript.

Lynn Helding - sabbatical project during academic year 2004-05, to further pursue Vocology through the new Master’s Degree in Vocal Pedagogy (MVP) at Westminster Choir College in Princeton, NJ. She also plans to write an article: “Vocal Fold Paresis: Effective Therapies for Impairment Management,” for submission to either the Journal of Singing published by NATS (National Association of Teacher’s of Singing) , or the Journal of Voice, published by The Voice Foundation.
Tullio Pagano - sabbatical project during Fall 2004,to pursue a research project on the history and culture of Cisiano, in Val Lentro, a small village situated in the mountains near Genoa. He plans to travel to Italy to do research at the local archives and interview the residents of the village.
Harry Pohlman – sabbatical project during academic year 2004-05, to work on two projects: a case study of a local homicide case and a textbook titled Law and Terrorism. He will also be revising his three-volume series of constitutional law textbooks titled Constitutional Debate in Action. He is under contract from Rowman and Littlefield for both of these books.
Susan Rose - sabbatical project during the Fall semester of 2004, to take a two-week language course in Mexico to increase her proficiency in Spanish which will enable her to more effectively contribute to a number of fieldwork programs with which she has been involved in the last few years. She also plans to conduct research in Periban de Ramos, Mexico for an article she will be writing on the growth of the Mexican community in Adams County and the patterns of circular migration between York Springs and Periban.
Andrew Rudalevige - sabbatical project during the academic year 2004-05. His research will involve extensive archival work exploring the president’s cabinet (and its relationship with White House staff), the Office of Management Budget, and the structure of the Executive Office hierarchy, which will require travel to various archival holdings, mainly presidential libraries. He plans to finish five pending essays commissioned for conferences and edited volumes, and to begin work on your third book.
Stephen Weinberger - sabbatical project for Fall 2004. He plans to spend a week in Los Angeles, reading the papers of Joseph Breen, the head of the Production Code Administration from 1934-54, and to evaluate the effects of censorship on the film industries in America (1934-54) and Iran (1979-99), for a planned article, “Joe Breen, the Ayatollah, and Film Censorship.”
Blake Wilson - sabbatical project for academic year 2004-05. He plans to travel to Florence to conduct research concerning the biographies of several late 15thc. Improvisatory singers, and the correspondence of Ambrogio Angeni for your book, Memory Houses: Orality and Literacy in The Musical Culture of 15th Century Florence.
Todd Wronski - sabbatical project for academic year 2004-05. He plans to research, compile, edit and assemble a full-length performance piece based upon the writings and public speeches of two towering literary figures who shared the 19th century: Charles Dickens and Mark Twain. He will be traveling to the British Library in London to research Dickens and to the Bancroft Library at Cal-Berkley, where a prominent Twain archive is housed.

Gisela Roethke for Women’s Studies Program - to support a two-day summer study workshop: Possibilities of Collaboration between Dickinson College and Bremen University Women’s Studies faculty, which will take place in late May 2004. Professors Pauline Cullen, Amy Farrell, Susan Feldman, Ashley Finley, Ann Hill, Ebru Kongar, Sharon O’Brien, Gisela Roethke, Susan Rose, and, faculty who are contributing to the Women’s Studies program, are planning a two-day workshop with three Bremen University women’s studies faculty members to explore many different opportunities for potential collaborations.
Dan Schubert/Ben Edwards –to support a summer study group: The Geology and Sociology of Natural and Man-Made Disasters. They plan to share their experience in Montserrat and collaborate with four additional faculty members on the preparation of a new multidisciplinary set of courses to be offered once every two or three years, is an excellent summer study project. The courses will be taught by faculty from across the College and will focus on the effects of natural and man-made disasters of the communities in which they occur.

Teaching:
Caroline Savage - to assist with expenses associated with her project to develop a new course in digital art and digital photography.

Professional Development:
Robert Pound - Toward expenses associated with his professional development activity this summer. He plans to participate in the International Conducting Workshop with Gustav Meier in Sophia, Bulgaria in August 2004.
Janet Wright - Toward expenses associated with her professional development activity this summer. She plans to develop expertise in molecular genetics with her project, Measuring Genetic Isolation of Subpopulations in a Woodrat (Neotoma magister) Metapopulation.