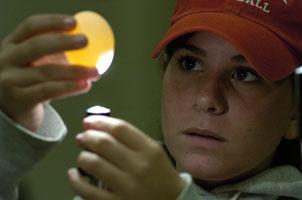 Bill Bellinger/Jonathan Rogers - supports his research for projects, “completion of a textbook entitled the Economic Analysis of Policy” and “adding to a data set (income per acre) on the income density of small town neighborhoods,” by hiring a student research assistant.

Matt Pinsker/D.J. Makowsky, John Osborne/Matthew Dudek, James Gerencser/Peter Lake - supports the continuation of their project to create a website, House Divided: A View of America, 1846-1862, by hiring a three (3)

Professional Development:
Catherine Beaudry – Fall 2005 - to assist with expenses associated with her attendance at a workshop with Professor Catherine Millot, University of Paris VII and Professor Daniel Heller-Roazen, Princeton University at Après-Coup Psychoanalytic Association on November 5, 2005.
Marcus Key - to be used toward expenses associated with his professional development activity. He will be attending a workshop/conference entitled “Bryozoan Workshop in the course of the exhibition Neptunschleier & Co,” at the Biology Centre of the Upper Austria Museums, Linz-Dornach, Austria, September 8-10, 2005.
David Sarcone - to purchase a year’s subscription to an on-line educational service provided by the Institute of Management Accountants.

Matthew Pinsker, History – for his project, “William Still & the History of the Underground Railroad” (book) and “House Divided” (website). He plans to complete the book manuscript and complete work necessary to launch the website.
Cotten Seiler, American Studies – for his project, “Republic of Drivers: Automobility and Subjectivity in the United States, 1895-1961.”
Abraham Quintanar, Spanish & Portuguese – (Spring 07) for his project, “Dictionary of the Old Aragonese Language.”

Ted Emery – to cover translation expenses for his publication, “Casanova’s Theater of the Body: Sex, Power, and the Field of Vision in an Episode of ‘History of My Life’.”
Ann Hill – to cover translation costs for a paper on cultural translation, “Cultural Translation and Some Problems in Interpretation of Yi Religion,” to be presented at a conference in Bapu, Sichuan, PRC, in August 2005.
Nitsa Kann – to cover travel, materials and photocopying expenses to defend her dissertation, “Kabbaliterature-Post/Modern Hebrew Literature and its Kabbalistic Precursors” at the University of California, Berkeley.
Heather Merrill – for editing and indexing her manuscript, An Alliance of Women: Immigration and the Politics of Race.
Tullio Pagano – to cover publishing costs of a volume entitled La civiltá del castagno: storia, ricordi e immaginario del borgo di Cisiano in Val Lentro (“The Civilization of Chestnut: History, Memory and Imaginary of the Village of Cisiano, in the Lentro valley”).
Marc Pape – to cover expenses for travel and per diem for his trip to Tallahassee, FL to defend his dissertation project, “Hopes and Impediments for a Democratic Transitions in Francophone West Africa.”
Kim Lacy Rogers – to cover indexing costs for her book, Life and Death in the Delta: African American Narratives of Violence, Resilience, and Social Change.
Jorge Sagastume - to cover two invoices from Ediciones Al Margen for publication of his two manuscripts: “Parábolis de medianoche” and “En busca de mi lengua.”
Amy Wlodarski - to cover mileage expenses to and from Rochester, NY, for her dissertation defense.

Elise Bartosek-Velez – to allow her to finish an essay to submit for publication by the fall of 2006 on the characterizations of Christopher Columbus by Peter Martyr, the 16th-century historiographer who coined the term “New World.”
Amy Farrell – to complete the final chapter “Reflections on Fat Stigma in an Age of Obesity” of her book manuscript Fat Shame: A Cultural History of Stigma, Dieting and the Fat Acceptance Movement.
Robert Ness – to allow him to continue his progress on a manuscript he is writing on Earl Lovelace, a Trinidadian fiction writer.
Julie Winterich – to allow her to revise and resubmit her manuscript, Gender & Society and to further develop her skills in the use of ATLAS-TI, a software program that analyzes qualitative data.
Neil Diamant – to organize, oversee and run an international conference on health, law, and justice in Asia which is being funded by the Freeman Foundation.

Grant Braught - to create the initial offering of a new implementation of Computer Science 364 – Artificial Intelligence (AI), which will use mobile robots to provide extensive hands-on experience with AI concepts and techniques.

R. David Crouch - He plans to spend the academic year at the University of Pittsburgh working in the labs of Professor Craig Wilcox on new methods in nanotechnology. They plan to modify a method for purification of newly prepared compounds that were developed by the Wilcox group to applications in the field of nanotechnology such as microfluidics, nanolithography and molecular machines.
Sharon O’Brien - She plans to complete The Norton Critical Edition of O Pioneers!, as well as an article on depression and American culture (“The American Disease”) that she will submit for publication. She will be writing a paper, which will ultimately become an article, on Willa Cather’s association of French culture with recovery from illness (“A Votre Sante: Cather, Healing, and French Culture”) to be delivered at a conference summer 2007. She is also applying for a teaching Fulbright to Ireland, to teach American Studies, American literature, and creative writing.

Professional Development:
Sherry Harper-McCombs – Spring 2006 - to cover travel and registration expenses for the U.S.I.T.T. Conference in Louisville, KY, for a professional development workshop titled “Costume Drawing and Rendering Techniques: Basics and Beyond”

Mark Aldrich, Spanish/Portuguese – to conduct research on the poet and artist Rafael Pérez Estrada (Fall 2006).
Jennifer Blyth, Music – to pursue three projects. First, practice intensively, with focused work on epic repertoire. Second, work at the American Music Center to identify new compositions for your future performances. Third, continue leading the formation of a new ensemble that will perform in mixed media.
David Crouch, Chemistry – to conduct research on applications of Precipiton Chemistry in Nanotechnology.
Neil Diamant, East Asia Studies – to write a book manuscript about the interaction between veterans, military dependents and family members of revolutionary martyrs and their fellow citizens and state institutions.
Sherry Harper-McCombs, Theatre/Dance – to study and photograph costume storage facilities in London; Stratford, UK; and Toronto, Ontario, Canada.
Marie Helweg-Larsen, Psychology – finish writing seven manuscripts and submit them for publication, and write an NIH AREA (Academic Research Enhancement Award) grant.
Marcus Key, Geology – to use bryozoans to test the hypothesis using fossil marine organisms in New Zealand that evolved during a hypothesized major change in ocean chemistry 39 million years ago (Spring 2007.
Nancy Mellerski, French/Italian – to complete the course entitled “Electronic Field Production” to allow you to better direct student video projects in your film studies courses (Spring 2007).
Jeff Niemitz, Geology – to work on one of two possible projects: (Plan A) Ocean Systems Science Text—travel to gather appropriate digital images and video for text; coastlines of the US or (Plan B) Geochemistry and paleoclimatology of early Mesozoic Newark Basin lake sediments.
Sharon O’Brien, English – to complete an editing project for which she has a contract: the Norton Critical Edition of Willa Cather’s O Pioneers.

Professional Development:
Carol Ann Johnston to attend a seminar in letterpress printing and fine press publishing at the Center For Book Arts in New York
Marcus Key to attend a teaching workshop in Salt Lake city sponsored by the National Association of Geoscience Teachers
David Kushner to attend a conference (workshop) of the RNA Society in June 2006
Mark Overstreet to attend a Statistical Analysis and Statistical Presentation Workshop presented by Edward Tufte
Janet Wright to attend a training session in Species Distribution Modeling Methods for Conservation Biologists offered by the American Museum of Natural History

Scholarly/Creative:
Sandra Alfers to travel to Palo Alto, California, to visit with Professor Emerita Katharina Mommsen (Stanford University) regarding her research on German poetry written in the Theresienstadt concentration camp. Professor Mommsen has in her possession unpublished poetry from one of the poets Sandra is researching and would like to go through this with her.
Tom Arnold to establish a small College vineyard, to be used as a living teaching resource for science courses, and for student/faculty research focusing on the biochemistry of polyphenolics and sugars in wine grapes.
Eva Copeland to travel to the National Library of Medicine in Bethesda, Maryland to examine archival material held in the History of Medicine division for cultural narratives of health and illness present in nineteenth-century Spanish novels and in medical texts and journals.
Marie Helweg-Larsen travel to Denmark for two purposes. First, to write an NIH (National Institute of Health) grant which will examine the cultural factors that influence actual and subjective risk for lung cancer comparing smokers and non-smokers in the United States and Denmark. Second, to write a research article in collaboration with a researcher at the Danish Cancer Society.
Sharon O’Brien to complete the research for, and writing of, an article on depression and American culture to be titled “Un-American Inactivity: Cultural Attitudes Toward Depression.”

Beverley Eddy for travel to Europe (Switzerland, Germany and Austria) for final research required for writing the first book-length biography of the Austrian novelist, playwright, and essayist Felix Salten.
Jorge Sagastume for his project under contract with Ediciones Al Margen, Buenos Aires, Argentina to complete a manuscript by the end of summer 2006 that focuses on the study of dramatic texts departing from the philosophies of ‘pragmatics’ and deals with the Spanish American drama under the specific lens of the Ethics of Development