Why should you study Russian now? The reasons to study Russian have changed considerably over the past twenty years, and they continue to change. Yet there is a timeless value in studying Russian and Russian culture. The Dickinson College Russian Department believes in educating its students to appreciate both the modern and classic value that the Russian language has to offer. 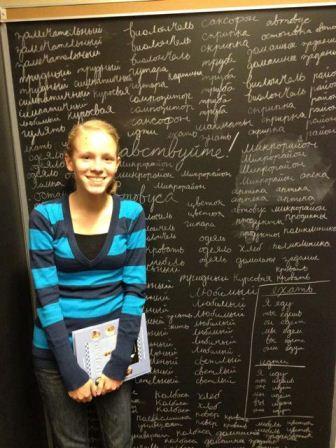 Less than twenty years ago, the Soviet Union was the "Evil Empire."

Communist Russia and the United States were the two superpowers of the world, competing with one another across sharp ideological and political lines. In the 1980s, following Gorbachev's policy of "openness," all that began to change. After the fall of communism in Eastern Europe, these modern times mark the beginning of a new, capitalist era for Russia.

Since 2000, Russia and the United States have moved through times of close cooperation and times of intense disagreement. The Russian language is classified by the U.S. State Department as a "critical language." This means that Russian proficiency remains a politically relevant skill, and that the study of Russian language and culture is an in-demand field of expertise among employers. Monumental changes have swept through Russia in the past decade, changes that can only be rivaled by those that accompanied the Russian Revolution nearly a century ago. To study Russia now is to study a process of metamorphosis unprecedented in world history and of vast geopolitical relevance.

Despite these tremendous political, economical and ideological shifts, Russia remains a land of magic and mystery. As Winston Churchill once said, Russia is "a riddle, wrapped in a mystery, inside a conundrum." This mystery, this enigmatic nature – what some have called the "Russian soul" – has been something that has inspired people to study Russia for centuries. Russia is a country rich in complexities, glimmering with subtlety, and always distinctly invested in its own essence.  A country that values and upholds its cultural treasures, Russia has a long and fascinating history. Russian language is equally rich, and complex, and Russian writers hold a unique place in the canon of world literature.

Why study Russian? Some reasons never change: Pushkin, Dostoevsky, Tolstoy, Solzhenitsyn, Tchaikovsky, Shostakovich, Chagall, Kandinsky, Ballanchine, Nijinsky. Even today, the artistic life of modern Russia is proving itself to be just as vibrant as in years past.

The skills you will acquire studying Russian are especially critical and versatile in current times. Travel to Russia is easy to arrange, and visitors to Moscow and other large cities will find all the conveniences and luxuries of home, and then some. Dickinson College's program, Dickinson in Moscow, provides not only an intensive summer study-abroad program, but also programs for the spring or fall semester, or for the academic year. Dickinson's programs are going on 25 years and have a close partnership with the Russian State University of the Humanities in Moscow. With so many newly opened doors between Russia and the United States in the past 25 years, studying Russian provides numerous career and educational opportunities.

There are nearly 3 million Russian-Americans living in the United States alone. The job opportunities for students of Russian are constantly expanding. Of course, there are still considerable opportunities for employment with such United States governmental agencies as the CIA, the FBI, the State Department, and the NSA, as well as non-profit organizations. Furthermore, the 2000s saw a huge growth in opportunities in the private sector, in such fields as business, marketing, finance, international relations, environmental studies, and the art world. A huge number of modern travel possibilities that afford visitation between Russia and the West have given rise to jobs in tourism and the administration of travel-abroad programs. International exchange organizations (such as the American Councils of Teachers of Russian) regularly post opportunities to work, teach, and volunteer abroad. You can also check out the web pages of The Moscow Times  or The St. Petersburg Times for specific job advertisements.

Read more on why you should study Russian now.

Read what our current students say.

For information about what some Dickinson College graduates are doing with their Russian degrees, visit our alumni page.