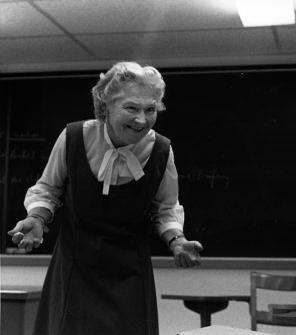 The Marianna Bogojavlensky Prize in Russian is awarded to a graduating student exemplifying excellence in Russian studies.

Marianna von Ungern-Sternberg Bogojavlensky taught German and Russian language and literature at Dickinson College from 1963 to 1981. She was born to Russian parents on September 1, 1915, in Helsinki, Finland and earned her master’s degree from the University of Helsinki. In 1950, she immigrated to the United States and earned her Ph.D. in Baltic and Slavic studies from the University of Pennsylvania. Bogojavlensky wrote and published Reflections on Nikolai Gogol (1969) and Russian Review Grammar (1981). She also translated Russian works into English. She published Three New Soviet Poets: Evgeny, Evtushenko, Leonid Martynov, Evgeny Vinokurov (1967) and Russia in Ilya Glazunov’s Art (1984). Bogojavlensky received multiple awards for excellent teaching. She died on July 10, 1993.

The most recent recipients of the Marianna Bogojavlensky Prize in Russian: