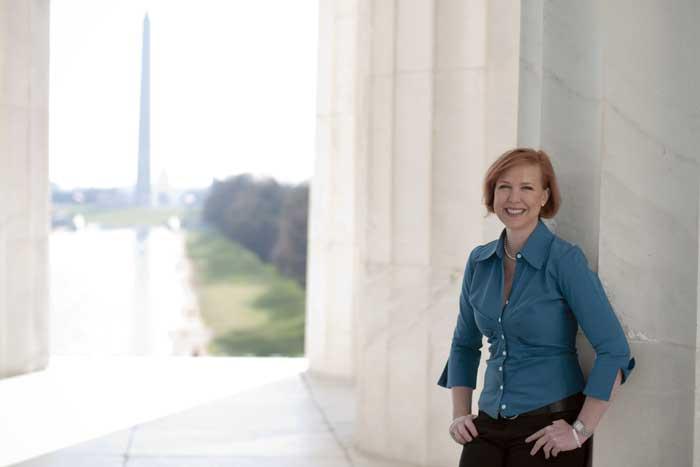 Kimberly Dozier, CNN and Daily Beast contributor and former correspondent for the Associated Press (AP) and CBS News and best-selling author of Breathing the Fire: Fighting to Survive and Get Back to the Fight, has been named the General Omar N. Bradley Chair in Strategic Leadership. While in residence, she will teach at Dickinson, the U.S. Army War College and Penn State’s Dickinson School of Law and School of International Affairs.

“I look forward to sharing some tough lessons from the field, and from Washington, D.C., with the students of three great institutions, while working on another book to pay it forward to those taking risks on our behalf overseas,” said Dozier, who just announced that she is leaving the AP and will become a contributing writer at the Daily Beast.

Dozier covered the war in Iraq for CBS News from 2003 until May 29, 2006, when she was critically wounded in a car bombing that killed the U.S. Army officer that her team was filming, Capt. James Alex Funkhouser, his Iraqi translator “Sam,” and her CBS colleagues, cameraman Paul Douglas and soundman James Brolan. In her memoir Breathing the Fire, Dozier recounts the attack, her injuries and the long road to recovery, including  dozens of major surgeries, skin grafts and extensive physical rehabilitation, before she was able to resume her career nine months later.

The proceeds from the paperback and e-book go to charities for the combat injured such as Fisher House, including donations of the paperback book to patients and families going through the same medical crisis.

Before her move to AP, Dozier covered the White House and the Pentagon for CBS News' Washington bureau from 2007 to 2010 and was primarily in Baghdad from 2003 to 2006, out of her home bureau in Jerusalem. In her 14-year career as a foreign correspondent, Dozier covered the Middle East extensively for CBS News, as well as for The Washington Post, The San Francisco Chronicle, Monitor Radio, Voice of America and the BBC World Service.

Her assignments for television and radio have spanned several continents—from Iraq under Saddam Hussein to the invasion of Afghanistan and the hunt for Osama bin Laden at Tora Bora, to the Kosovo refugee exodus, to Vladimir Putin's election, to the downing of the U.S. spy plane in China and the violence of Northern Ireland's not-so-peaceful peace process.

Dozier left CBS News in March 2010 for the Associated Press, where she spent the past four years covering intelligence and special operations. She is currently a CNN and Daily Beast contributor.

During her time as the Bradley Chair, her research will focus on a new book on resiliency, the intelligence community and special operations.

A member of the Council on Foreign Relations, Dozier has received a Peabody Award, two Edward R. Murrow Awards and four American Women in Radio and Television Gracie Awards. She is the first woman journalist to receive the National Medal of Honor Society's Tex McCrary Award for her coverage of Iraq.

Born in Hawaii, Dozier graduated from Wellesley College with a bachelor of arts in political anthropology/human rights and Spanish and earned a masters of foreign affairs/Middle East at the University of Virginia.

Named in memory of the World War II hero, the General Omar N. Bradley Chair in Strategic Leadership provides a visiting scholar the opportunity to explore with students and faculty the nature of leadership and how it can best and most ethically be exercised in a world transformed by globalization, technology and cultural change. The chair also seeks to enhance the study of leadership and encourage civilian-military dialogue and contribute to the educational and research activities of the partner institutions.