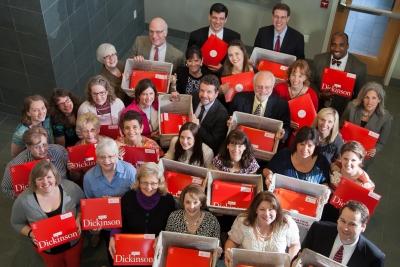 Dickinson continues to demonstrate its increased selectivity, as measured by the decrease in the admit rate and the increase in the academic profile of the admitted pool. More than 5,840 applications were received and 39.8 percent were admitted (a 2.2 percent decrease from last year). Regular Decision was particularly competitive as admitted applicants reflect an admit rate of 20.8 percent.

"After months of careful deliberation and selection, we celebrate a particularly strong admitted pool full of great promise," said Stephanie Balmer, vice president for enrollment, marketing and communications and dean of admissions. "The class of 2016 exhibits a range of interests and strengths that complement Dickinson. We are eager to welcome admitted students and parents to the college and to greet families at our off-campus receptions over the next several weeks."

Accepted students and their families will connect with the college at a number of on- and off-campus events that offer opportunities to meet classmates, network with alumni and engage with faculty and administrators. These events range from big-city venues to private residences in locations including:

If you'd like to meet with someone in your area, please contact the Office of Admissions at