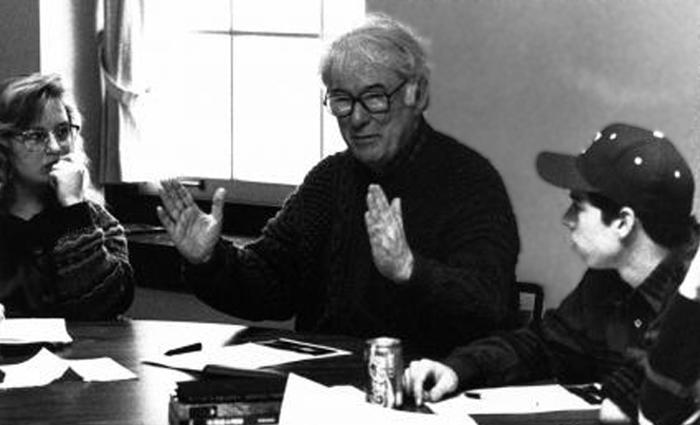 The Dickinson community mourns the loss of a beloved international poet and friend of the college, Seamus Heaney, who was laid to rest in Ireland today.

Often referred to as the most accomplished English-language poet since Robert Frost and as one of the greatest poets of our age, Heaney chronicled the struggles of Northern Irish life and garnered praise from casual and avid readers alike. He traveled to Dickinson twice in recent years and was slated to come to campus this winter to accept the 2014 Harold and Ethel L. Stellfox Award.

“We are deeply saddened at the news of his death and send our condolences to the family,” says President Nancy Roseman. “This is a loss for Ireland and for the world.”

The eldest of nine children, Heaney was born in rural Northern Ireland in 1939, a charged time in a contentious corner of the world. His poems first appeared in literary journals while he was still an undergraduate English major at Queen's University Belfast, and he published his celebrated debut collection, Death of a Naturalist, at age 27. Other acclaimed works followed, earning Heaney an international reputation as an astute observer of the familiar and the miraculous. His biting wit and signature style were fresh and gritty, plain-spoken and songful, personal and accessible, all at once.

In 1993, Heaney traveled to campus to accept the Dickinson Arts Award, give public readings and work directly with students, in and out of the classroom. His residency was so successful that Heaney was invited back to campus to deliver that year’s Commencement Address. Just two years later, Heaney was named the third Irish author to receive the Nobel Prize for Literature, following William Butler Yeats and Samuel Beckett. He also was awarded the T.S. Eliot Prize, and his collection District and Circle (2006) was named one of the 100 Best Books of the Decade by the London Times.

Students, teachers and scholars of literature may also recognize Heaney as a noted essayist and translator whose translations of Beowulf and Sophocles’Antigone are taught and performed across the English-speaking world, and as an educator who held residencies and professorships at Belfast University and Harvard University, among others. He was the first Irish poet to be elected Professor of Poetry, Oxford University, serving in that post from 1989 to 1994.

Heaney died Aug. 30 at age 74 after a brief illness. He is survived by his wife, Marie, and three children, Christopher, Michael and Catherine Ann. His memorial service drew friends, colleagues, dignitaries, celebrities and other luminaries from across Ireland and around the world.

According to BBC News, Heaney’s friend and colleague Paul Muldoon related during the service that Heaney’s greatest gift was his ability to “make each of us feel connected not only to him, but to one another.” The BBC also reported that Michael Heaney told the crowd of mourners that his father’s “generosity in spirit as well as obvious gifts as poet left everyone who met him feeling lucky to have known him," and that his final words—sent via text, to his wife—were "Noli timere." Translated from Latin, it means “Do not be afraid.”

"His funeral was so touching because it was all about what a wonderful person he was," says Professor of English Carol Ann Johnston, Heaney's friend and former student at Harvard University, who was instrumental in bringing her mentor to campus. "He was thinking of others until the end."

Programs in honor of Heaney’s life, vision and work are currently being planned for the Dickinson 2013-14 academic year.