When the President Talks About You in a Speech 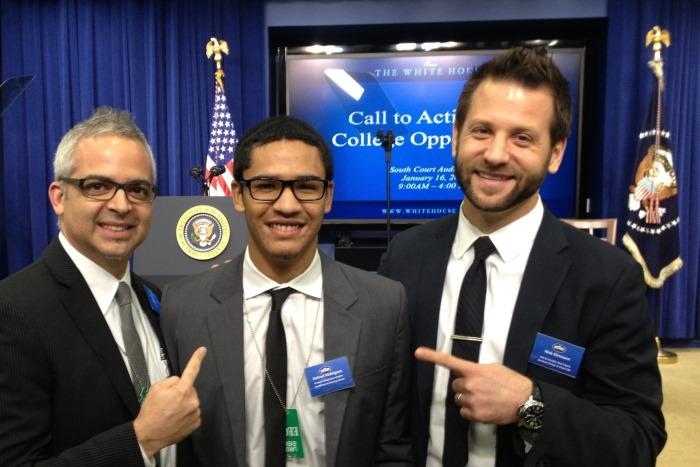 When you hear that the president of the United States is going to mention you in a speech, you might have to mentally prepare yourself. Take Estiven Rodriguez '18, for instance, who found out President Obama was going to tell his story to kick off the College Opportunity Summit, an initiative geared toward expanding access to higher education.

Rodriguez showed up on Jan. 16 at the Eisenhower Executive Office Building in Washington, D.C., where he was led through what must have seemed like a mile of security to his seat. President Obama began, and Rodriguez listened carefully, the speech closing in on him minute by minute.

When Obama mentioned Blue Engine, a New York City educational nonprofit that Rodriguez had worked with, and Rodriguez's high school, the Washington Heights Expeditionary Learning School (WHEELS), he was getting close.

And then it happened

"The first group of students ... are seniors now," Obama said, scanning the audience. "One of them, Estiven Rodriguez, who also is here—where is he? There he is—good-looking, young guy right here."

Rodriguez laughs as he remembers it. "I kind of blacked out for a couple of seconds," he says.

But once Obama was done telling Rodriguez's story—how he moved to the United States from the Dominican Republic when he was 9 years old, didn't know a word of English, how he's now headed to Dickinson on a full scholarship, the first in his family to attend college—his nerves recovered just in time.

"As soon as he was done with his speech, he told someone, 'I want to meet those guys,' " Rodriguez says, "so somebody pulled me [and another student] over, and I went back, and he was right there. We had a 10-minute conversation with him and Michelle Obama."

The president told Rodriguez that he loved his story, that he was proud of him, that this was just the beginning.

"You know what was so crazy about it?" Rodriguez says, his voice lighting up. "I was so nervous during the Posse awards ceremony, but when I met the president, I was not nervous at all."

But before all that

That Posse ceremony was an earlier step on Rodriguez's path to Dickinson, but before that came the night that he got the call telling him he'd been accepted.

"It was nine at night," he says, the excitement of the moment sneaking into his voice. "So I wanted to scream so loud, but I told [the callers] I couldn't because my family was sleeping. And then they all started screaming for me."

Cathy McDonald Davenport '87, executive director of admissions, had spent quality time with Rodriguez during the application process, and she was one of the people delivering the good news that night.

"Estiven's persistence and determination and his ability to recognize that he needed to do it for himself, for his family—these were the things that really stood out about him," she says. Now that he's been accepted, Rodriguez is looking forward to diving into life at Dickinson, and two of his abiding interests happen to be strengths on which the college prides itself.

"Posse made Dickinson an easy school to pick," he says. "I got to know so much about the school through them—how prestigious it is, why it would be a great choice for me. I really want to study abroad. And in high school I didn't get to volunteer as much as I wanted to, so I want to do that as well."

Before he can immerse himself in those opportunities, he has some local fame issues to deal with, as the video of the presidential event went viral among his friends, family and classmates.

"I can't walk through the hallways at my school without people clapping and stuff," Rodriguez says, recalling just one more element of the experience that brings an immediate smile to his face.