A woman in leather boots and a fur coat walks along a wooded pathway at night, a parade of furless animals in tow. A bright light indicates that an epiphany has arrived, and a scrawl at the bottom of the drawing spells it out: “The Ghosts of the Skinned Want Their Coats Back.”

This nightmarish scene emerges from the imagination of internationally recognized artist-activist Sue Coe, who visited campus in October to accept the Dickinson Arts Award.

Born in England and transplanted in New York in the early 1970s, Coe has tackled a variety of social-justice issues through the years, but she gained wide recognition as an animal-rights champion after publishing an exposé of the slaughterhouse industry in 1996. More of Coe’s books and essays on the topic followed, along with a graphic collection of animal-rights artwork that is represented in major museum collections and exhibitions worldwide, as well as in publications like The New York Times and The New Yorker.

During her weeklong residency at Dickinson, Coe was on hand to answer questions during a public screening of a documentary about her life and during the Arts Award ceremony, which followed the opening of The Trout Gallery’s exhibition of her works, The Ghosts of Our Meat. The exhibit includes paintings, drawings and prints and continues through Feb. 8. She also visited with faculty and students in and out of the classroom and offered one-on-one critiques to senior studio-art majors as they worked toward their final exhibition in the spring.

Emily Lehman ’14, one of the students to receive individualized feedback, says that Coe opened her eyes to the many thematic avenues artists can take. “I learned that everything you learn feeds into the next thing that you learn or make,” she said.

Coe has been influenced by the works of a historically and culturally diverse range of artists, from Francisco Goya and Käthe Kollwitz to Hieronymus Bosch and José Posada, and the persuasive intensity of her work is due in equal measure to her passion and her skill as an artist. “Being able to speak with an artist so talented and renowned was invigorating, because it shows what one is able to accomplish when they find their passion,” said Stephan Sieg ’16, who added that the ethics of food production and consumption became a much-debated topic among his friends.

Clara “Maddie” Fritz ’16, who attended a dinner in Coe’s honor at the President’s House and served as a mic runner during Coe’s Q&A sessions, says she slipped into The Trout Gallery prior to the opening reception so she could see Coe’s works before the crowd arrived. She says she wasn’t prepared for the emotional punch the prints delivered together, in full scale.

Each work teemed with intensity. There were pre-slaughter animal studies and portraits—treatments that highlighted each animal’s individuality, beauty and vulnerability—and factory-line slaughter scenes that invited viewers to absorb the terror and pain each animal experiences.

The works also depicted the toll that the slaughterhouse exacts on workers who butcher animals, but in general, those workers were painted as villains. Along with bloated consumers, corporate fat cats and the entire capitalistic, meat-production system portrayed in her work, the butchers are responsible, in Coe’s view, for nothing short of murder.

The artist in person is far gentler than the hard-hitting images she creates, but she’s every bit as forthright. Diminutive and soft-spoken with flowing salt-and-pepper hair, Coe moves quietly and smiles easily. But she looks at you directly, straight in the eye. She seeks to connect.

That’s because for Coe, it’s not enough to express her own sense of horror and outrage; she seeks to instill that horror, outrage—and empathy—in others. The art-making, for Coe, is only the first step: The rest is up to the viewer.

“I want you to understand that if you want a nonviolent world, you can choose to practice veganism—a diet that’s aligned with your values,” said Coe, who has not eaten meat since a childhood encounter with a pig that had escaped from a slaughterhouse. “You can choose the nonviolent path.” 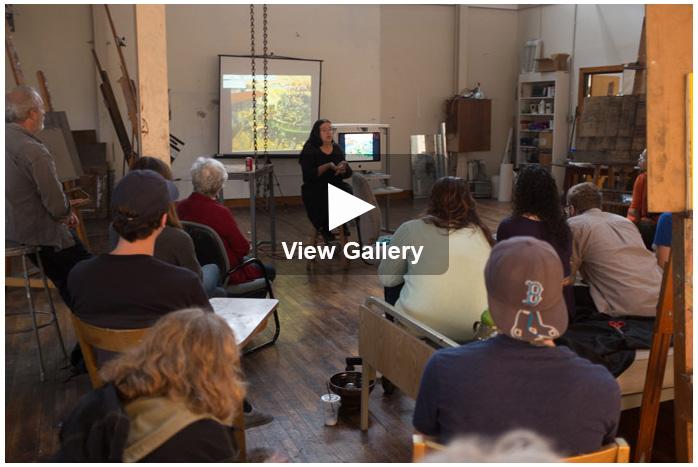