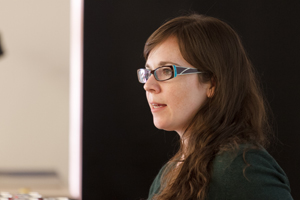 Children’s book editor Martha Mihalick ’01 visited Dickinson on March 3 as the 2013 Cogan Fellow to discuss her development from Writing Center tutor to editor at GreenWillow Books. Mihalick said she followed “the most boring career path ever,” but the English majors in the audience were awed—myself included. The crux of Mihalick’s talk,Writing in the Margins: A Children’s Book Editor in the Big City, was to be self-aware, to “follow your strongest interests” and to take advantage of all the opportunities that Dickinson provides.

Mihalick admitted that when she began to think about the benefits of her Dickinson education, she was surprised by how much of it she uses everyday. “It’s not something that’s conscious,” she said, “but a lot of the way I view the world and live my life is really shaped by my time at Dickinson.”

Below are Mihalick's lessons learned as an English major at Dickinson.

You’re always in conversation with literature

“Books and stories aren’t these aloof, set-in-stone things,” Mihalick advised her audience. “We get to react, argue, agree and look at every work as living and breathing.” While at Dickinson, Mihalick honed her interpretive and articulation skills. She also learned that 20th-century literature and later—especially those that dealt with social commentary or had fantastical or feminist elements—was her calling. As an editor, her greatest asset is her opinion and taste, but editing is a subjective business. “Books I love aren’t going to be the books that every other person loves,” she said.

It’s okay to write in books

“Can anyone get through as an English major without learning the fine art of underlining and making notes to yourself in the margins?” Mihalick asked the audience. To understand what you're reading, notes act as a great base to build on, she said. Mihalick uses her notes today to help authors understand where the reader may stumble or how to improve a scene.

"Never take the pencil out of the writer’s hand"

Judy Gill, former director of the Writing Center, gave Mihalick this piece of advice during the preparation course for Writing Center tutors. Mihalick admits that she constantly reminds herself not to impose herself on a writer’s work because her job is only to “help the writer’s vision get on the page in the strongest and clearest way he or she can write it.”

Be direct and strong without “seems” or “maybes”

Gill, Mihalick recollected, was an unbelievably tough paper grader, but she also made Mihalick a better writer. So you should listen to your professors when they are hard on you. But Gill left an even deeper impression. A recurring comment on Mihalick’s papers was to be stronger in her writing. Gill insisted that Mihalick cut out those “seems” and “maybes” and be direct. Even though sometimes it is better for Mihalick to be gentle and kind—after all, she is telling authors what is wrong with their writing—it is important to be strong in your convictions.

Read and talk about, in depth, several different stories simultaneously

When Mihalick first came to Dickinson, she believed that you “had to finish one book before you started another,” she said. That quickly fell to pieces, she added. By taking countless English classes and reading a lot of books, Mihalick refined this skill. By her graduation, she was accomplished in reading and critically discussing multiple books, which she deems helpful, considering the insane number of submissions Mihalick reads annually. Just as of March 2013, Mihalick already had read 16 picture books, eight novellas or short stories, nine full novels, one poetry collection and parts of 20 other manuscripts.

Learn how to fake reading books

“This might be a good time for the professors to daydream for a moment,” Mihalick began. Although she insists that she “totally” read Emma for Professor of English Wendy Moffat’s Austen class while she was trying to finish her senior thesis, Mihalick asserted that it is impossible to read all the books that are coming out. It is important, however, to listen and “be aware of the conversations surrounding a lot of books and be able to participate in those discussions.”

Take as many general-education requirements as possible

“Being interested in other people and things beyond your passion is really valuable,” Mihalick said. She is required to know “a little about a lot of things,” which she notes is similar to the ideals of a liberal-arts education. You will know your major really well, and you will also have a basic level of information in many other fields. For example, when Mihalick was given a picture book, Organs, to work on, she was thankful for her biology class.

Learn to live the “Dickinson Whirlwind”

There are always a dozen things happening at once between classes, homework and activities. It was not unusual, Mihalick said, to leave her room at 9 a.m. and not return until midnight. With all that busyness, Dickinson prepared her for the real world, where now it is just a normal day to leave her house at 8 a.m., stay in the office until 7 p.m., and go to some activity—whether it is work related, the gym or spending time with friends. In the chaos, Mihalick learned how she functions and works best.

Pay attention to where and how you work best

Mihalick tried many strategies for studying and paper writing during her four years at Dickinson. What she learned worked best for her was claiming a table in the Underground near the coffee, where she could be surrounded by busyness and the occasional friend stopping by. Mihalick noted that her office environment is very similar. She even admitted that there may be sporadic yelling or singing between offices.

Indulge your own nerdy interests

Looking back to her senior year, when she and her friends were trying to think of events for the Belles Lettres Society, Mihalick said, “We were creating what we wanted to consume,” which is still what Mihalick does on a daily basis. Mihalick started developing her interests right here, and she continues to do so by attending literary events and readings just because she is interested in the topic.

Learn not to burn bridges and how to be diplomatic

At Dickinson it is hard to walk anywhere without seeing at least one person you know. Even now, 12 years after graduation, Mihalick still runs into familiar faces. Children’s book publishing, Mihalick said, is the same. The business is a “crazy small world,” and it is built upon relationships with countless people, from authors to literary agents to librarians. These relationships are crucial, especially the author-editor relationship, which “has to be open and honest in order to get the best book in the end.”

Be unafraid to embrace your passions

Embrace all your passions to “whatever degree they interest you,” Mihalick said. She has followed this standard throughout her college years and career, and it has been what has helped her most. When she talks to writers, she tells them this all the time because it is not about being trendy, it is about “finding your people and doing what you love best.”

Mihalick first discovered her passion during the summer between her sophomore and junior year, when she had what she calls her “life-changing revelation” that she could make a living while indulging in her love for children’s books.

The summer after graduation, she attended the Denver Publishing Institute, where she heard Virginia Duncan, the publisher of GreenWillow. Mihalick spent the entire lecture psyching herself up to be aggressive enough to attach herself to Duncan’s side after the lecture. Luckily, she succeeded and, during lunch, Duncan mentioned an opening for an editorial-assistant job. After two interviews, Mihalick was hired; 11 years later, Mihalick is the second editor in command at GreenWillow.

Mihalick began her lecture, “I have always liked to read.” Evidently, she found others who feel the same way.

Learn more about the Cogan Fellowship.