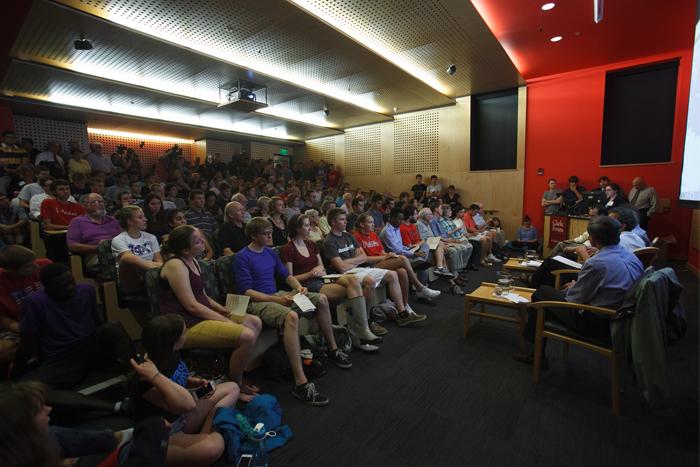 What's next for Syria was the topic of discussion as a panel of Dickinson experts in in military affairs, international studies and politics addressed the apparent use of chemical weapons by the country's leader and the likelihood of a military response by the U.S.

"Obama's declaration of a red line now has to be upheld," said panelist Neil Diamant, professor of Asian law and society, who also teaches courses on Israeli politics and statehood and provided the Israeli perspective.

The timely discussion, which took place before an overflow crowd, raised such issues as how the conflict affects other countries in the Middle East, the substance and binding character of international law and other U.S. constitutional and political issues.

"This strike should be done with strategic purpose," said panelist and former congressman and three-star admiral Joseph Sestak, the 2013-14 Omar N. Bradley Chair in Strategic Leadership.

At the end of the panel, Dickinson students had an opportunity to ask questions. Concerns ranged from how Iran and North Korea might react if the U.S. fails to respond militarily to how countries striving for democracy would view the nation if President Obama strikes Syria without Congressional approval.

According to panelist Edward Webb, assistant professor of political science and international studies, whatever action is decided upon by President Obama and Congress, "The U.S. shouldn't expect to be loved. That ship sailed a long time ago."

Russell Bova, professor of political science and international studies, moderated the panel discussion, which was sponsored by The Clarke Forum for Contemporary Issues.