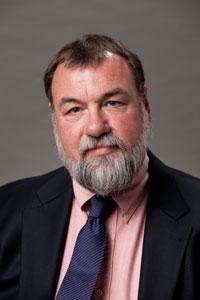 Limitless possibility is both a blessing and a challenge. And no one understands this better than Philip Jones, whose own circuitous path brings a special depth of insight to his roles as Dickinson's new dean of career development and assistant vice president for student development.

A native of England, Jones decided at 15 that he'd pursue an army career. He didn't think about it again until his final year in college, when, to his panic, he realized that there was a wide world of opportunity he'd never explored. "I had never looked beyond the gates," he recalls. "So I checked out my college's career center. It was my introduction to what was possible."

Decades later, he's devoted his professional life to helping others sidestep that moment of pre-graduation alarm by refining their goals early in the process. "I never did an internship. So it was a case of 'do what I say, and not what I did,' " he explains.

Jones' path began when he graduated from the University of Wales and took an internship-coordinator job in London. A few years later, he moved to the United States to pursue a master's in higher education at the University of Wisconsin-La Crosse—a program that was then unavailable in the U.K. He accepted a position at the career center at St. Michael's College after completing coursework for a Ph.D. in the field.

It was a good fit, ideologically and culturally, and the college was just outside of Burlington, Vt., where the terrain reminded him of Wales. A career was launched.

Jones next moved on to a directorship at Mount Holyoke College, where he designed and built a new career center and helped institute a career-services network between liberal-arts colleges, including Dickinson. And then came Yale University, where Jones developed city-based internship programs throughout the U.S. and in 17 foreign countries.

He loved his work at Yale, but he missed the smaller, liberal-arts community and the chance to perform the work that had led him to this career path in the first place: being on the front lines, making a direct impact on students' lives. Dickinson offered those opportunities, and the college's international culture struck a chord. So he made the move.

At Dickinson, Jones continues the expansion of the internship notation program, which grew 50 percent last year, and is especially interested in attracting more students from disciplines that traditionally do not emphasize the internship experience. "We want everyone to take an internship," he says.

And he does mean everyone.

That includes the student who presented the most unusual counseling assignment in Jones' career. He smiles and recalls the day when a student walked into his office at Mount Holyoke and asked for his help charting out a career as a professional puppeteer. This previously-unfamiliar career path represented a moment of truth: Could he help this student chart a path to success? Could they discover ways to integrate additional interests into the mix?

"At the time I knew nothing about puppeteering, but I certainly do now," he says with a laugh, explaining that he did a good deal of research to get up to speed. "We took the time to really seriously think about what she would like to do, and then I learned what I could, along with her [about puppeteering] and helped her make informed decisions. Knowledge is power."

The key, he stresses, is early engagement, since students who begin their career inquiries in their first year have the opportunity to explore multiple options until they find the one that fits. That's particularly important in the current academic climate, in which the average student changes majors up to three times. "It's also important to continue to expand alumni engagement—especially young-alumni engagement—to help students and alumni build networks that will help them shape, and as needed, re-shape, their careers," Jones adds.

Jones' passion for his work shines through in conversation. And he tells students that their process of discovery should be ongoing, as new technologies, industry trends and personal passions emerge, and new vocations and avocations come into view.

He practices what he preaches.

A few years ago, Jones began a side interest in archaeology, and after many vacation visits to archaeology sites and museums, he picked up an M.A. in that field. He was delighted to teach an archaeology course at Yale and is looking forward to exploring Dickinson's archaeology lab as time permits.

You'll see evidence of Jones' new passion in his office, where archeology books line the shelves (he specializes in the Viking era), along with smatterings of rugby paraphernalia and the shiny marble globe that dominates his desk. These internationally themed keepsakes offer a glimpse not only of the hobbies of the man behind them, but also the degree to which he follows his own advice. Jones counsels students to create lives that draw together multiple interests and talents and reach toward the challenge of new adventures.

"I tell students to keep an open mind throughout their searches, because there are areas, professions and interests they may not be aware of today that they may end up doing one day," he says. "The key is to keep learning and growing."