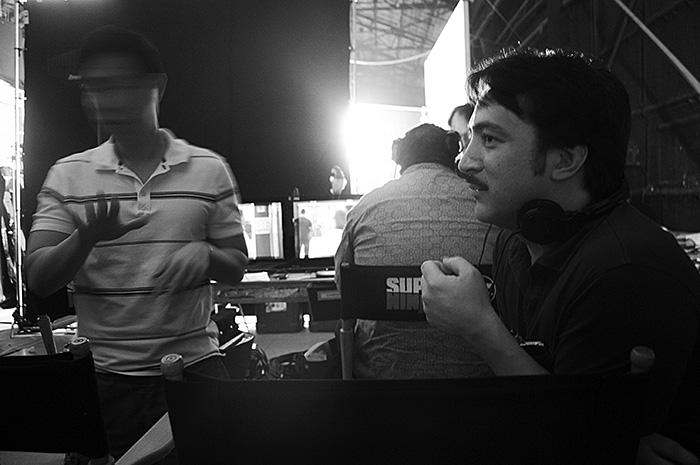 Pittsburgh’s 31st Street Studios are housed in a massive warehouse under the 31st Street Bridge on the Allegheny River. Eric Garcia ’90 is sitting in a canvas director’s chair, his gaze glued to two ultra-high-def monitors displaying the scene being filmed 20 feet away on the other side of a temporary wall.

“It’s like making a mini-movie every week,” he whispers. “We write it like that, with a three-act structure. A haiku version of a movie.” The show at hand is called Supah Ninjas, and it has a cinematic quality not seen in most TV shows, let alone kids’ programming—a rich, textured look that’s more Kill Bill than Hannah Montana.

You haven't seen this before

Garcia created the live-action show with longtime friend and creative partner Leo Chu, and it centers on three teenagers who team up to become, as the Nickelodeon Web site puts it, “crime-fighting, butt-kicking and villain-battling” ninjas (and who attend Benjamin Rush High School, which Garcia named after Dickinson’s founder). Also in the mix is George Takei—the recently larger-than-life Internet presence and original Star Trek’s Mr. Sulu—who guides the ninjas from beyond the grave as a hologram.

“You always want to give the audience something they haven’t seen before,” Garcia says of his approach to the show. And the viewing audience hasn’t seen this before: a mixture of comedy and action, steeped in Japanese culture, sporting a multiracial cast and aimed at teens. “Action-comedy like this is a niche thing in the TV market,” he says, noting that there are plenty of movies that dive headfirst into that mix of genres each year. “It’s been a historical struggle [making TV shows like this work], since the early Batman with Adam West, which is part of our inspiration.”

Garcia, who hails from Pittsburgh, was a fine-arts major at Dickinson and focused on painting. “I was always stoking my creativity, painting a lot, but I really didn’t know what I wanted to do,” he says. “But after college I started writing whatever I felt like getting on paper. I was following my creative impulse but not my professional impulse.”

Garcia began to engage his professional impulse after getting his foot in the door at Walt Disney Studios, where he met Chu. The assistant spot he landed was on the hit show Recess, and it kept him close to the writers and other creative forces behind the program.

“I spoke that writer language,” he explains, “and I pitched stories, and when they had opportunities to write some I ended up getting them. Then Leo and I started dreaming up shows together.” They sold their first show to Spike TV and another to Disney. Then came Afro Samurai, featuring the vocal talents of Samuel L. Jackson in the title role, which they also sold to Spike. “Some stuff wasn’t produced, but I was able to survive the process,” Garcia says. “After that, we wanted to develop a genre show for boys—action-comedy—so Supah Ninjas was born.”

Bringing it all together

In the Supah Ninjas wardrobe room, there are racks and racks of clothes—from sports uniforms to ninja garb to Benjamin Rush school uniforms. Seamstresses pick away with needles and hunch over sewing machines as Garcia walks through. In the design building, there is a lightweight manhole cover that looks 100-percent real, a book being designed for an actor to read in one scene, the details falling into place right down to the text on the pages within.

A world within a world is created, and as creator, executive producer and showrunner, it’s Garcia’s job to make sure it all comes together. Supah Ninjas walks the fine line between action and violence, a key distinction in a show involving the martial arts, weapons, fighting and an impressionable teen audience.

“It’s a fantasy, and you don’t want to destroy that with something serious,” Garcia says. “To tell any kind of story that means anything, there has to be something at stake, but no one [on the show] is getting killed. They can have swords and throwing stars and other weapons, but we’re not showing blood, so it’s how we use it. Standards and Practices tell us what we can do, but on this particular show—they’re ninjas! So maybe we’ve eroded their standards a little bit,” he says with a laugh. His laugh, apparently, was a little too loud, as the next sound carrying through the set is a disembodied voice: “Let’s lose all the white noise, people!”

Back to Benjamin Rush

Having attended his 20th Dickinson reunion just before they shot the Supah Ninjas pilot episode (for which he and Chu won a 2012 Writer’s Guild Award for “Outstanding Writing in Children’s Episodic and Specials”), Garcia says he never considered naming the show’s school anything but Benjamin Rush High.

“I saw my entire freshman floor and had a really great time,” Garcia says. “And Dickinson was an amazing time for me. I was able to dabble in so many things, which really shaped my creativity. That foundation helped me transform from a personal artist into a content creator thinking about broader things. And now I get to do what I love.”