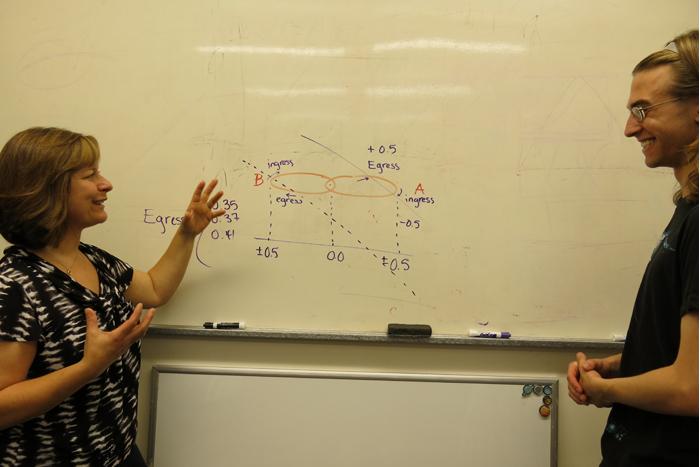 Ben Kimock ’15 first caught Associate Professor of Physics & Astronomy Catrina Hamilton-Drager’s attention in her Intro to Astrophysics class. She recalls him being fairly quiet and hard to crack but asking some of the best questions she’s ever been asked by a student. She saw his curiosity and hunger for knowledge and did something she had never done before—she approached him to work with her this summer on her own longtime personal research.

Hamilton-Drager has been observing the KH 15D binary star system for many years, calling it a “treasure trove” since it is still forming and changing. Hamilton-Drager has been mapping gas flows from the circumbinary disk (CBD) to the stars in the system via hydrogen gas—specifically, the hydrogen alpha (H-alpha) spectral line. The plan for this summer was to have Kimock focus on archival data from the Chandra X-Ray Observatory, a NASA space telescope that has been taking pictures of and gathering data on this phenomenon and the area of space around it for years. But when Kimock received the data chip from the archive, KH 15D was missing.

Since the data they had been planning to analyze didn't actually exist, Hamilton-Drager needed to find a new project for Kimock. She and colleagues from the Max Planck Institute for Astronomy in Germany, as well as Wesleyan University, had submitted a proposal in fall 2012 to use the 3.5-meter telescope at the Calar Alto Observatory in Spain to further map gas flows of the KH 15D system with the H-alpha spectral line. Fortunately, this proposal was successful and Hamilton-Drager had the spectroscopic data in hand. Even though Kimock had not worked with this type of information before, he dove right in.

“I’ve always been really interested in science and always find myself wanting to know more and asking a lot of questions,” Kimock says. “I’m really benefiting from the opportunities with faculty here and the network of students in the different science programs.”

“He had just taken my spectroscopy class in the spring, so he was applying what he had just learned,” Hamilton-Drager says. “And he hit a home run. He’s finished! What's more, the work Ben has done provides a foundation for a new proposal for more data, so we can ride this train for a while.”

On to project number three. Kimock is now mining data on another focus of Hamilton-Drager’s research, which involves calculating the physical size of stars.

“The way Ben works is he doesn’t let things he doesn’t know or understand get in his way," she explains. "It doesn’t stop him. It makes him dig deeper."