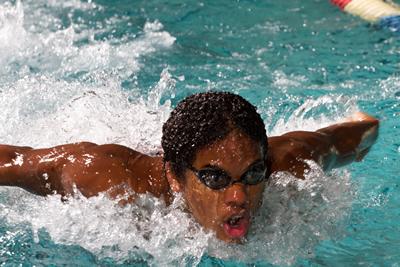 Record-smashing Jason Adams '14 was recruited by numerous colleges and universities but chose Dickinson for its balance. "When I visited here, I had great time with the team members," he recalls. "It never seemed like swimming consumed their life."

by Mike Bennett '12
March 7, 2012
Record-smashing Jason Adams '14 was recruited by numerous colleges and universities but chose Dickinson for its balance. "When I visited here, I had great time with the team members," he recalls. "It never seemed like swimming consumed their life."

Each time Jason Adams ’14 approaches the starting block at the Kline Center natatorium, he faces the Dickinson swimming records posted on the wall across the pool. After only two years on the men’s swim team, Adams has broken seven school records—each one increasing evidence that this quiet sophomore from Kingston, Jamaica, is on track to become the best swimmer Dickinson College has ever boasted.

On Feb. 26, Adams was named Outstanding Male Performer of the Centennial Conference (CC) Championships for the second year in a row. He earned NCAA automatic qualifying times in the 50 freestyle (20.23) and 100 backstroke (48.72) and currently holds top five times in both events among Division III competition. More importantly, Adams helped the men’s team place second in the CC this season. “Clearly, Jason is the best swimmer in the conference,” says Head Coach Paul Richards. “But Jason is never arrogant. He always cares more about the team’s efforts.”

When Adams’ mother encouraged him to start swimming at age 5, he didn’t envision breaking records as a college varsity athlete. In Jamaica, the sport isn’t particularly popular. “People don’t really get into swimming where I’m from,” he says. “The more popular sports are track and field and football. Swimming is kind of in the background.” His brother and sister had tried swimming, but Adams was the only family member to take his hobby to a competitive level.

Adams swam for his high school, Campion College, starting in seventh grade (in Jamaica, high school is grades 7 through 13). He also swam for a club team in Kingston to gain experience against top competition.

“We had pretty competitive meets, but my team was a good team, with tight competition with everyone,” Adams says. “It was a great experience. We had local meets that lasted for three or four days sometimes. I would swim 15 events and all different strokes.”
When the time came to decide whether Adams would stay in Jamaica or enroll in a high school in the United States, he wasn’t sure what path he would take. Competition in Jamaica was stiffer than most schools in the U.S., but he was never in it for the competition.

“I had friends who went abroad, and you kind of watch what they do,” he recalls. “I wasn’t sure if I was going to swim in Jamaica or the states. But I decided to [move to the U.S.]. You get to meet new people, and it’s a whole new experience again.”

In 2008, Adams travelled 1,600 miles to enroll at Kent School in Kent, Conn. In his first meet, the newcomer broke two school records. He returned to the warm waters of Jamaica every summer and, in 2010, represented his country as a member of the Junior National Squad-Jamaica in the Central American and Caribbean Games.

“You get to swim against real top guns, like Olympic athletes,” he says. “You meet a lot of people from other countries and make friends. It was really fun on every level.”

After swimming at Kent for two years, Adams was recruited by colleges and universities ranging from Division I to III, including University of Connecticut, Penn State University and Kenyon and St. Lawrence colleges. Adams narrowed his choices to Division III schools.
“At a [Division I] school, swimming would be pretty much my life,” Adams says. “Athletics can take precedence over academics, and in [Division III], it’s really a good balance of both.”

“Swimming wouldn’t just define him at a Division I school,” adds Richards. “It would consume him.”

In the end, Adams chose Dickinson because he liked the atmosphere and wanted a balance of academic, athletic and social life. For someone who has always loved meeting new people, Dickinson was paradise. “I love the student life here,” he says. “It’s conducive to every aspect of your college experience—socially, physically and academically.”

Adams joined Kappa Sigma fraternity in his second semester and has participated in organizations such as Club Afrique and Active Minds. Although he hasn’t declared his major yet, Adams looks to pursue economics.

That balanced life has been his motivation to continue swimming: breaking records, earning titles and shooting for a team CC championship. “In the team, we’re like a unit,” Adams says. “We all joke around, but everyone has each other’s backs. The team culture is always there.”