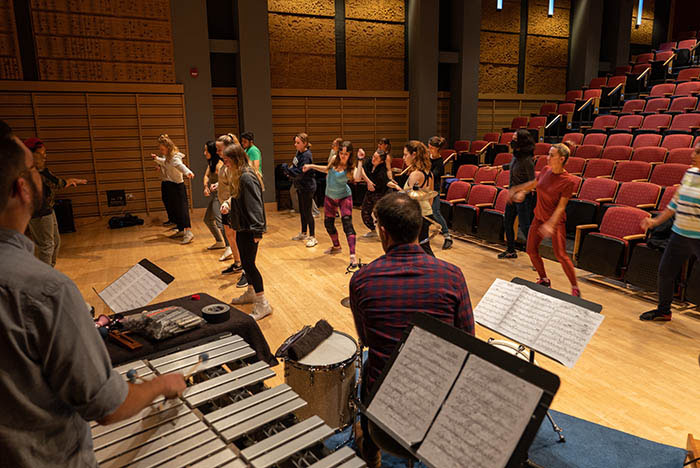 The Value of Artistic Residencies at Dickinson

Residencies are vital to arts education at Dickinson. They create opportunities for students in arts-related classes to learn directly from an array of accomplished professionals throughout their undergrad years who can share—and demonstrate—what it’s like to work and thrive in related careers. Dickinson arts residencies also inspire students across all of the majors—and expose them to a variety of issues, techniques and works making waves in the arts worlds today.

Arbelaez, the 2022 studio art artist-in-residence, is a Colombian American figurative artist, sculptor and ceramist who explores feminist issues such as reproduction and sexual differentiation, as well as the themes of ancestry, heritage, spirituality and nature. Dickinson's annual studio art residency is made possible by Sylvia J. Smith '73, an art-department alumna, leading architect and Dickinson trustee.

Working with various materials, including clay, Arbelaez tells and honors the stories and people of underrepresented cultures. These themes in her work are grounded in autobiographical narratives ranging from explorations of her Colombian family’s immigration to research of pre-Colombian South American culture to her own experiences of what it is like to be and identify as Mestizo.

The artist has been hard at work in Dickinson’s ceramics studio, creating pieces for her fall exhibition at Goodyear Gallery, on display now through Nov. 16. While on campus, she’s also delivered a lecture about her process and worked directly with studio art students and students learning about Latin American, Latino & Caribbean cultures. On Thursday, Nov. 3, the entire Dickinson community was invited to a public demonstration of the magic at work. Arbelaez gave a lunchtime demonstration and spoke about how her ideas take shape in clay. And like all professional visual artists who visit Dickinson, she’s given individualized critiques to senior-year studio art majors, as they prepare works for their capstone joint exhibition in the spring. 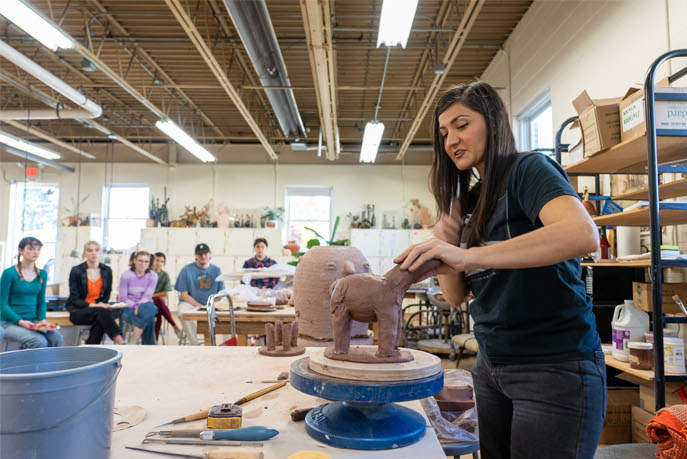 Iris Shaker-Check ’23 (computer science, studio art) was among those senior-year students who benefited from Arbelaez’s critiques. She’s also had several conversations with the artist, who helped her learn to fire a bisque kiln.

“I have learned a lot from Natalia's different glaze processes, some of which I had not seen done before,” says Shaker-Check, who’s been working in the medium since before enrolling in Dickinson. “I have also found it helpful to see how work in ceramics can transfer to other artistic fields—in Natalia's case, to video.”

Third Coast Percussion (TCP) marked its third Dickinson residency during the first week of November—the repeat visits owing to the group’s energized, dynamic and varied programming, and for the depth of their ability to connect meaningfully with students. This residency was sponsored by the Dickinson music-residency program and the Truman and Beth Bullard Music & Culture Series.

The internationally acclaimed, Grammy Award-winning ensemble began on Nov. 1 by providing live music for a dance class then attended rehearsals for the College Choir and Orchestra.

Thea Duane ’26, a dancer, French-horn player and student singer, was in the modern dance class and also interacted with the artists-in-residence through her music-focused First-Year Seminar. She enjoyed the give-and-take—as the students created movements to match the live music and the musicians created live music to match the movements—and the chance to ask questions directly of the renowned musicians.

“There is something to be said about putting a face to the art you’re experiencing and to the empathy that comes with it,” Duane says. “Artists inspire each other, and as the next generation of artists, it’s important to start building those connections.”

The residency also included music education programs at local schools, along with Dickinson music students, and live performances and demonstrations in Dickinson music classes, including classes focusing on music composition and on music used in film and video games. Students studying African civilizations learned about music and instruments from Zimbabwe and how the ensemble uses these traditional instruments outside of their original contexts.

On Nov. 4, the ensemble ended its residency with Paddle to the Sea, a concert highlighted by music composed by the ensemble for an Academy Award-nominated film of the same name. The event also included new video art, additional modern music and Chigwaya, a traditional Shona (modern-day-Zimbabwe) piece on mbira.

Everett Cheng ’25 (music), was thrilled by the chance to have his composition for marimba and vibraphone performed by the professional musicians as part of his music composition class. “It was incredible to hear, and it was also very valuable,” Cheng says. “I’m extremely grateful for this opportunity.”