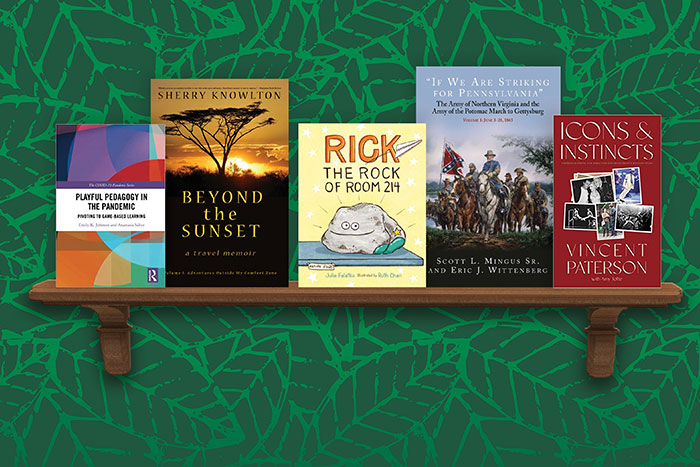 Paterson shares the story of how he rose from dancer to choreographer and director for the world’s greatest singers, including Michael Jackson, Madonna and Björk, and for cinema and musical comedy. He takes readers into the fascinating universe of film sets, rehearsal sessions with dozens of dancers, life backstage, his successes and his disappointments.

Beyond the Sunset: A Travel Memoir. Volume 1: Adventures Outside My Comfort Zone

From Woodstock to the Okavango, Beyond the Sunset tells of how a bookworm turned flower child turned health care executive found joy in traveling the world. Structured in a series of essays and anecdotes, this memoir tells the story of a small-town Pennsylvania girl who stretched her horizons, tested her limits and traveled all over the globe. This is a departure for Knowlton, who is best known for her five-book Alexa Williams suspense series.

“If We Are Striking for Pennsylvania”: The Army of Northern Virginia and the Army of the Potomac March to Gettysburg

A history of the opening moves of the Gettysburg Campaign, this compelling study is one of the first to integrate the military, media, political, social, economic and civilian perspectives with rank-andfile accounts from the soldiers of both armies as they inexorably march toward their destiny at Gettysburg. This is Wittenberg’s 22nd book of Civil War history.

Rick is a rock. For as long as he can remember, he’s lived on the Nature Finds shelf in Room 214 alongside an acorn, some moss and a piece of bark. One day, the teacher shows the class what rocks do outdoors, and Rick is captivated. Exploding out of volcanos? Plunging off cliffs? Now Rick’s determined to get outside—after all, he’s a rock, and rocks are made for adventure. Even rocks have big dreams in this sweet and wacky picture book. This is Falatko’s 10th children’s book.

Playful Pedagogy in the Pandemic: Pivoting to Game-Based Learning

Johnson is assistant professor of English at the University of Central Florida, and in the wake of COVID-19 she and her co-author impart the need to create a space for playful learning in higher education. Through an in-depth analysis of the challenges and opportunities presented by pandemic pedagogy, this book offers a model of hope for a future driven by new tools and platforms for personal, experimental game-making as intellectual inquiry.