The Misadventures of a Nontraditional President 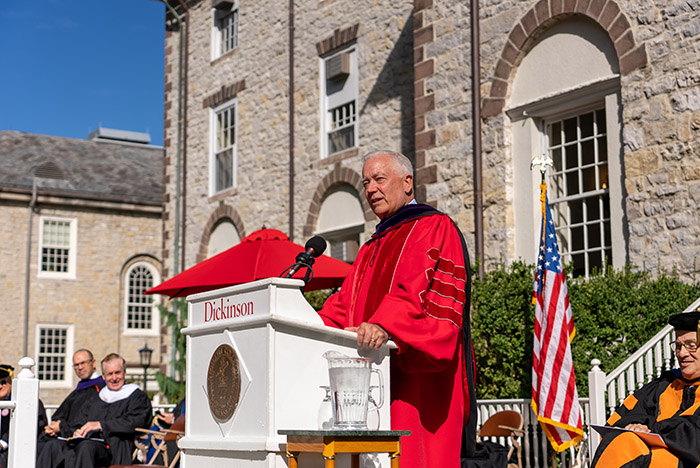 In the somewhat unique world of college and university presidents, I am regarded as a nontraditional leader. This is an interesting designation that deserves to be unpacked.

Traditional presidents are those who hail from inside academia. They typically commence their careers as tenure-track faculty members and then rise through the ranks. Of course the ranks that I rose through involved law, politics and the federal judiciary—the very essence of nontraditional when it comes to leading a college!

To be sure, I am not alone. Increasingly, institutions are hiring nontraditional presidents who possess differing skill sets than those unique to individuals who’ve spent their careers inside the ivy-covered walls. This can be a productive endeavor, but it certainly presents challenges and comes with a steep learning curve.

I’ve now spent almost a year and a half in my corner office in Old West. Despite the fact that I spent 13 years on the board of trustees of the college, including four as chair, there was an incredible amount to learn about the way Dickinson operates. Nothing can fully prepare one to lead a college, and you cannot possibly imagine what it’s like to do so until you’re on the job. Let me provide an example.

In fall 2021 I assumed the president’s role in presiding over monthly faculty meetings. Fresh off the federal bench and accustomed to conducting proceedings as a judge (including occupying, as I used to joke, the best seat in the house), I plunged right in. Notably, I had never attended a faculty meeting. When I thought participants were speaking too long, I interrupted them and asked them to get to the point. I hurried along speakers to move to the next agenda item. I truncated debate to save time. In general, I acted as if I were running a courtroom. But I wasn’t anymore, and the faculty parliamentarian gently but firmly called me out on my behavior. He was entirely right to do so, because I was out of sync with the standard operating procedure.

Through this and a couple of other misadventures, I’ve learned some hard but useful lessons. Former U.S. Secretary of Defense Robert Gates, who has also served as president and chancellor of several institutions of higher learning, stated that “The successful nontraditional presidents … are ones who have the ability to understand the academic culture and actually still thrive in it.” I could not agree more. It’s also been said that to operate well, the nontraditional president must be a kind of amateur anthropologist who can discern how a group operates, what codes govern it and how change can be created.

Dickinson has a system of shared governance that is more than just an ideal. While it can at times be cumbersome and counterintuitive, the same criticisms can be leveled at our nation’s system of democratic government. There are many constituencies on this campus, and navigating them can be challenging. But in the end, our all-college committees and the ability they create for robust participation in the governance process create a constructive tension that has kept Dickinson strong throughout our long history.

I often tell our students and alumni that they should never stop learning, no matter where they are in life. I’ve been taking a big dose of my own advice for the last year and a half. This is as it should be at Dickinson College. I’m still learning, and I pledge to continue to do so as we move forward toward an even more successful future.