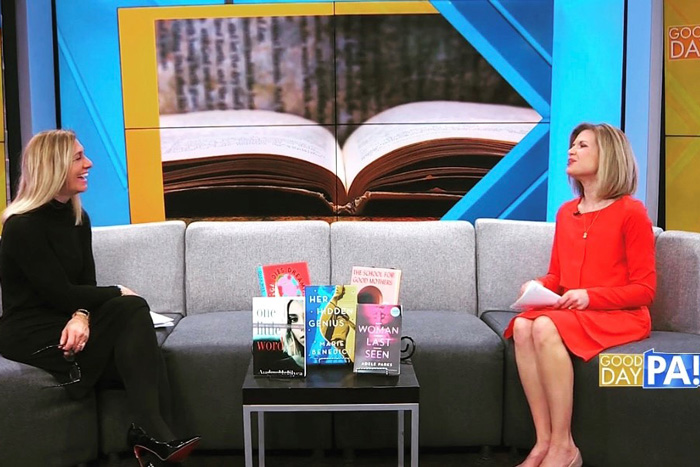 Former English and philosophy major returns to campus Oct. 7 for a public discussion with President Jones

It’s hard to imagine a better career for a former English and philosophy double major than one as a lawyer. Mentally unwinding complex situations, writing about them clearly and precisely, helping people understand what’s at stake.

And that’s exactly what Amy Impellizzeri ’92 did for 13 years, working as federal law clerk in Washington, D.C., and then as a corporate litigator in the greater New York City area, representing Amtrak, insurance companies and Fortune 500 companies embroiled in nationwide litigation.

But there’s obviously another career where all of those skills come into play.

“Throughout my legal career, the thing I loved the most was deep-diving into the stories behind the cases,” says Impellizzeri. “Rooting out the facts and the details that would help tell the whole story of my clients was a passion of mine. When you look at it this way, I guess transitioning to full-time storyteller wasn't such a big stretch after all!”

That transition took place a decade ago, when Impellizzeri left the law behind to become a full-time writer. Now she’s published eight books—six novels and two nonfiction works about, you guessed it, transitioning away from a law career (How to Leave the Law and Lawyer Interrupted)—and is also on the faculty of Drexel University's MFA program in creative writing.

“In the law, you have to work with the facts you are given and tell the best story you can under the circumstances,” she says. “In writing, I have the freedom to tell the story I want to tell. I have reclaimed my own voice. My novels are not autobiographical, but they are deeply personal, and that’s my favorite part of this leg of the journey.”

With two new books hitting the market in 2022, Impellizzeri is set to return to campus on Oct. 7 for an open-forum discussion with President John E. Jones III ’77, P’11, another Dickinsonian who recently pivoted from a career in law.

“This is a full-circle moment for me,” Impellizzeri says, noting that the first book signing for her debut novel was held at Dickinson’s bookstore, and President Jones and his wife, Beth, were among the attendees. “Of course, then I knew him as Judge Jones, and as I signed a copy of Lemongrass Hope for them, Judge Jones and I joked that we had both left the law-firm life for something better but had taken different paths.”

And of course both paths began at Dickinson, a place that both Impellizzeri and Jones have relied on to form the foundation for their careers in the law and beyond.

“I’m a huge fan of the liberal-arts education I received at Dickinson—the critical thinking and interdisciplinary approach really imprinted me,” Impellizzeri says, adding that she loved practicing law … until she didn't. “When I started to explore other paths to put my J.D. to use outside of the practice of law, I was met with a lot of resistance, both internally and externally. I really believe my liberal arts background helped me break through that resistance and start telling myself—and others—a new story instead.”

While she’s been busy writing, teaching at Drexel, holding the post of president of the Women’s Fiction Writers’ Association (2016-17) and winning awards (among them INDIE FAB Book of the Year awards, the inaugural Francis Ford Coppola Books & Bottles Pick and National Indie Excellence Awards), Impellizzeri has been keeping an eye on President Jones’ path as well.

“I’ve followed his career, and I was thrilled when he was first named the interim president and now has been inaugurated as the new president of Dickinson,” she says, adding she’s noticed that the law tends to attract creative people. “The real magic happens when lawyers find ways to explore and cultivate that creativity. And so for me, as someone who has spent years advocating for the versatility and breadth of the J.D. degree, President Jones' career trajectory—and current passion for Dickinson's future—is a perfect illustration of what happens when lawyers find a way to use their J.D.'s for good.”

Impellizzeri will be back on campus on Oct. 7 for a public conversation with President Jones, during which they’ll discuss their legal careers and how Dickinson set them both on a successful path and helped them manage different careers when they decided to pivot. The one-hour event will be held in the Stern Center Great Room at 7:15 p.m. To register, click here. Impellizzeri's story and writing can be explored further on her website.