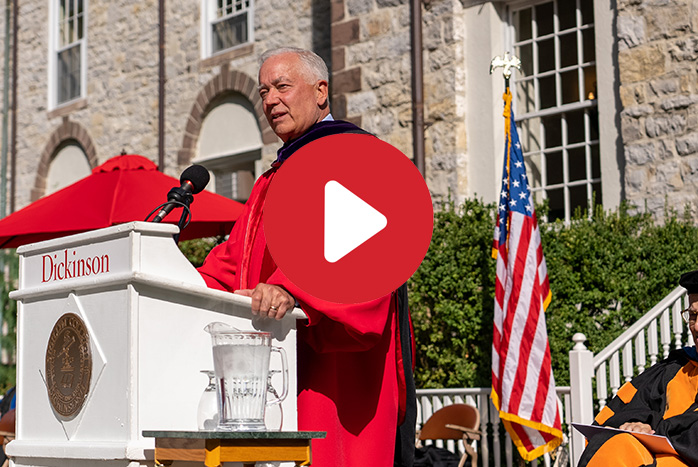 Saturday, Sept. 24, marked a joyous full-circle moment for John E. Jones III ’77, P’11. Some 45 years after he earned his Dickinson diploma and walked down the “old stone steps” on graduation day, Jones returned to the lawn in front of Old West—this time to celebrate his inauguration as the college’s 30th president.

Jones, who retired from the federal bench to accept the Dickinson presidency, had stepped in to lead as interim president in 2021 and was named president last February. The formal inauguration ceremony in his honor—held 20 years to the day since he was sworn in as a federal judge—was planned to coincide with the college’s Homecoming & Family Weekend so that Dickinson families and alumni could more conveniently attend.

Soon after students, alumni, Dickinson families, faculty, staff and friends of the college filled the outdoor seating to witness the history-making event, delegates from colleges and universities near and far marched in a processional to Old West in full academic regalia. Jones and his wife, Beth, took the took the stage, along with their family, members of the college’s senior staff and other distinguished guests.

One of only 30 presidents to lead the college since its founding in 1783, Jones expressed his excitement and gratitude and described the role as “an opportunity of a lifetime.”

"My friends, I am utterly convinced that Dickinson's best days lie ahead," he told attendees during his inauguration speech. "This is our moment, and I can feel the momentum. I call upon everyone here, and on our parents and alumni across the globe, to join us as we move Dickinson forward into a future where we are stronger, more innovative and always true to our mission."