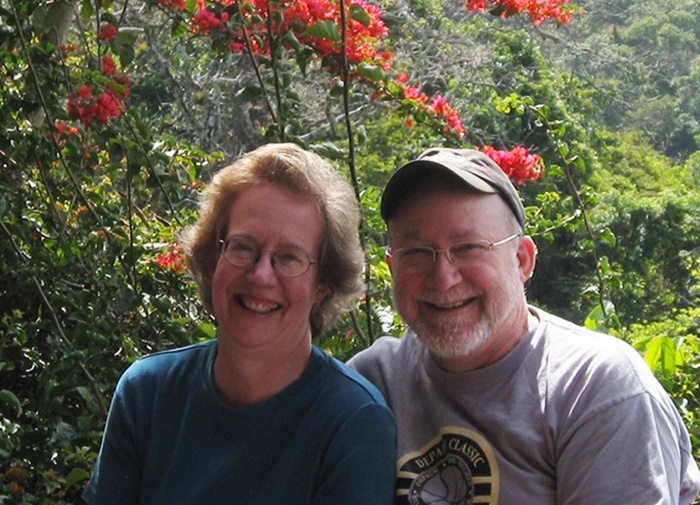 Neal Abraham '72, a liberal-arts college faculty member and academic administrator, and his wife Donna Wiley are longtime Dickinson supporters. Most recently, they established a fund to support student-faculty research.

After a controversy broke out on campus in spring 1969 over Professor Ralph Sandler’s grading policy and a faculty committee’s response, Neal Abraham ‘72’s work as a student-reporter heated up substantially. That experience, combined with his interest in governance, led to his recruitment to an ad-hoc committee addressing campus governance concerns. Abraham’s undergrad experiences on this committee, and on others, provided a primer on committee work, higher-ed governance, institutional fundraising, budgeting and strategic planning—and it laid a foundation for a life of leadership and philanthropy.

The valedictorian of his high-school class in Hagerstown, Md., Abraham earned a scholarship to Dickinson—a necessity, given that he was one of seven children, five of whom attended college, with up to three attending at one time.

Abraham declared a major in physics and a minor in mathematics. As a sophomore, he joined Dickinson’s future dean, then-Professor George Allan, as co-chairperson of the college-governance committee. Abraham went on to serve on several of Dickinson’s new all-college committees for development & communications, institutional priorities & resources and budget. In 1970 he was elected editor-in-chief of The Dickinsonian and, the following year, president of Student Senate. When the Dickinson Follies were revived during his senior year, Abraham raised funding and unlimbered his cello to play in the orchestra for Oklahoma.

The physics faculty was stretched thin during Abraham’s senior year. When he was invited to teach some of the introductory physics labs, he agreed—but only if he could deploy active-learning techniques he’d learned through Public Affairs Symposium programs. The department gave the green light. As a senior Abraham also served as a teaching assistant for the team-taught interdisciplinary Humanities 101 course. From these experiences he developed a love of teaching that would continue for over fifty years.

An equally formative experience unfolded during the summer of 1970, when Abraham and fellow physics major Steven French ’71 conducted research with Professor Neil Wolf on plasma physics—the study of ionized gases, such as those in fluorescent light bulbs—and how they respond to electric and magnetic fields.  “I made a diagnostic apparatus [a large brass canister] for measurements,” says Abraham, who worked alone and with the physics department’s technician, French and Wolf. “Though there were not many significant results, the work was very rewarding. That led me to emphasize experiments in my graduate work and in my career as a physicist.”

After graduation, Abraham entered the graduate program in physics at Bryn Mawr College, where Dickinson professors Ken and Priscilla Laws had earned their Ph.D.s. He chose to do research in a new branch of laser physics now known as quantum optics. Working with a new faculty member, he helped set up the labs with purchased equipment and locally fabricated systems.

“It would’ve been a different situation if I hadn’t had experience in the lab when I was at Dickinson,” he remembers. “As it was, I already knew how research was done and what we’d need for the labs.”

In 1977 Abraham earned a Ph.D. in physics and began a full-time teaching and research career at Swarthmore College. Three years later, he joined the faculty at Bryn Mawr, where he rose in the ranks to professor and was awarded an endowed professorship. He also served two terms as department chair. Abraham supervised a dozen graduate students and more than 50 undergraduate-research collaborators, many of whom co-authored scientific papers and presentations and have gone on to stellar careers in physics and related fields. Bryn Mawr’s physics department received the Presidential Award for Excellence in Science, Mathematics and Engineering Mentoring from President Clinton during Abraham's tenure.

Abraham also served, pro bono, as assistant coach of Bryn Mawr’s varsity soccer team, which, to his delight, placed many players on the first Centennial Conference all-conference team—many of which, coincidentally, were physics majors.

Sabbaticals allowed Abraham to conduct collaborative research in Italy, Germany, France, Belgium, Spain, China and Russia. His work was supported by grants from Research Corporation, the Air Force Office of Scientific Research, the National Science Foundation and NATO, which allowed him to visit and welcome many international colleagues.

Abraham later served as vice president for academic affairs, professor of physics and astronomy and executive vice president at DePauw University in Indiana. Over 11 years he recruited over half of DePauw’s faculty members, broadening the representation of women and persons of color and working to address inequities in pay and tenure processes. He also was active in intercampus academic collaborations, both with other members of the Great Lakes Colleges Association and with other liberal arts colleges.

In 2009 Abraham was appointed executive director of the Five College Consortium in Amherst, Mass., overseeing all aspects of intercampus collaborations from language teaching and libraries to joint departments, faculty appointments and certificate programs. Since 2010 he has taught waves and optics, quantum mechanics and intermediate and advanced laboratories as a part-time Five College professor at Mount Holyoke College.

Abraham is an expert in laser physics and nonlinear optics, and his research in those areas has been extensively published and cited. During his 18 years at Bryn Mawr, Abraham helped to build a multidisciplinary international community of experts on chaos and nonlinear dynamics, with his contributions focusing on laser systems and the further study of deterministic pattern formation and pattern fluctuations.  He is an elected Fellow of the American Association for the Advancement of Science, the American Physical Society and the Optical Society of America, and he has served on national science education committees.  Abraham has also edited several scientific journals and conference proceedings and organized dozens of international scientific conferences.

Over the years, Abraham has become widely recognized as a leader in developing physics undergraduate programs, particularly for undergraduate research at Swarthmore and Bryn Mawr, and has he published extensively on effective teaching and mentoring practices (Science Teaching Reconsidered, Effective Practices for Physics Programs) and on interinstitutional collaborations.  He served as president of the National Conferences on Undergraduate Research and the Council on Undergraduate Research while working at Bryn Mawr.

While an undergraduate, Abraham helped to raise funds from students, parents and alumni to recognize the college’s retiring president, Howard Rubendall, with the creation of a scholarship benefitting a senior who demonstrated leadership.

As an alum in the 1990s, Abraham served on a science-resources fundraising committee.

Since 2009 Abraham has given back as a Dickinson trustee, bringing 40 years of experience at liberal-arts colleges to his work on the board’s academic affairs, executive, finance and facilities committees. He currently serves as vice chair of the academic & student-life committee.

Abraham and his wife, Donna Wiley, have lived in Whately, Mass., since 2009. Both champion a variety of educational, environmental, historical, cultural and social justice causes. In addition to his work as a Dickinson trustee, Abraham serves as a Whately Cemetery commissioner and president of the Whately Historical Society, while Donna serves on the boards of Grow Food Northampton and the Clowes Fund, a national grant-making foundation, and on Whately’s community preservation, finance and historical committees.

In 2022, to express gratitude for Abraham’s transformative undergraduate research experience at Dickinson and the scholarships he received, the couple established endowed funds to support student-faculty research in all fields and a named scholarship.

“We are both somewhat surprised and happy that we are in a position to contribute to institutions that do good work in areas important to us,” says Wiley. “And we are happy that we can do something meaningful for Dickinson during our lifetimes.”