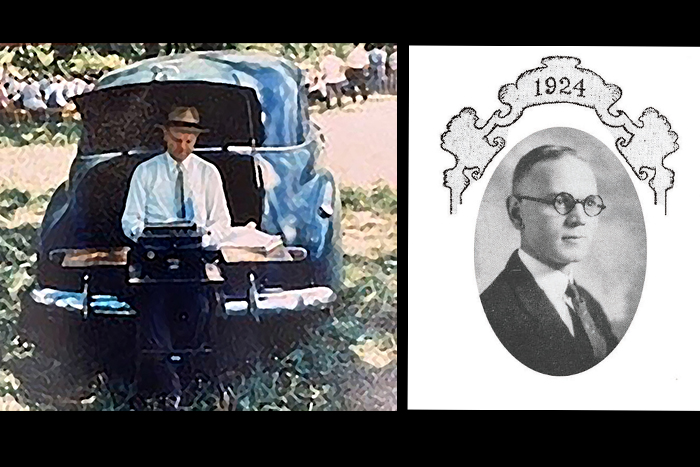 A Tribute to the Writing Center’s Norman M. Eberly, class of 1924

If you know Dickinson, you’re likely well aware of the college’s award-winning Norman M. Eberly Multilingual Writing Center, which offers targeted writing assistance in English and 10 other languages from trained student-tutors. But do you know about the self-made 1924 alumnus who inspired it, and why this distinctively Dickinson resource bears his name?

Norman Eberly’s story begins in rural Pennsylvania, where his father was a tenant farmer in Perry County. The third of four children, Eberly attended a small country school and became the first in his family to pursue education beyond the usual endpoint of eighth grade.

Eberly continued his education by enrolling at the Cumberland Valley State Normal School, now Shippensburg University, with a dream of becoming a teacher, $50 in his pocket and a modest loan from his older brother. He worked as a janitor and waiter to earn the remaining funds, but it wasn’t quite enough. So he paused his education and found jobs at a steel mill and munitions plant. Just as World War I was ending, he was drafted into the Army and sent to boot camp. He then returned to the Normal School, graduated with a teacher’s certificate and began teaching at an elementary school in Mount Union, Pa.

It wasn’t long before Eberly realized that a bachelor’s degree would help him advance his career. As a member of Dickinson’s class of 1924, he joined the Theta Chi fraternity, played on the football team, majored in English and wrote for The Dickinsonian. During senior year he was named editor, while also working as a correspondent for local and regional newspapers. But finances remained challenging, and Eberly nearly withdrew from the college because of it. Eberly explained his situation to Dickinson’s then-president, James Henry Morgan, and Morgan waived his remaining tuition obligations, allowing the English major to graduate on time.

As a young grad working at the Carlisle Sentinel, Eberly was usually the sole news writer on staff. Later in life, he recalled a tip that led to an exclusive, in-person interview with industrialist Henry Ford, who’d come to Carlisle by personal train car to visit friends at the U.S. Army War College barracks.

Eberly married a Wilson College graduate, Mary Keeny, in 1934, and they bought a house close to Dickinson’s campus. He was elected president of the Carlisle Rotary Club. In 1944, he accepted a faculty job at Penn State, editing research reports developed by the college’s Agricultural Extension Service. In this role, he drove to farm shows and harvest festivals across the state, meeting farmers who benefited from the university’s research. After his retirement, Eberly was appointed director of public relations for the Department of Agriculture of Pennsylvania, a role that led him to relocate to Harrisburg. This allowed him to continue to write about agricultural affairs for more than a decade. Eberly was inducted into the Mermaid Society in 1994. He died in 1996, at age 99.

Eberly’s lifelong passions for learning and writing were infectious, say his son and daughter-in-law, Joe and Shirley Eberly, who pursue academic lives at the University of Rochester—Joe as Andrew Carnegie Professor of Physics and founder of the Rochester Theory Center and Shirley as a research statistician analyzing data from medical clinical trials. In 2005, they supported what would become the Norman M. Eberly Writing Center, inspired by the generosity of the late President Morgan and by Dickinson’s continuing commitment to its students’ well-being and success.

The Norman M. Eberly Writing Center provides a collaborative space where both English-speaking and world-language-speaking students meet to strengthen their written-communication and analytical skills. Joe notes that it is a fitting tribute to his father, “who used the skills learned at Dickinson throughout his professional and civic life.” Student-tutors at the center often work with multilingual officers from the nearby U.S. Army War College.

Joe and Shirley have continued to support the Writing Center and its programs in the years since its founding. Their 2016 gift provided for the center’s redesign and expansion and provided funding for the Writing Center’s work in partnership with Dickinson’s new Quantitative Reasoning (QR) Center.

“My father was interested in mathematical issues, and he regretted that writers are often math-averse. He would have strongly approved of that collaborative work,” Joe noted.

In 2018 the Eberlys made a gift in support of the Faculty Learning Community in Writing, and a 2021 endowment allows this work to continue in the years to come. Noreen Lape, who directs the Writing Center and the college’s writing program, says the Eberly family’s influence is deeply felt and appreciated.

“The Eberlys’ generosity, which goes back almost two decades now, has made an unmeasurable positive impact on thousands of Dickinson writers and tutors who have come together in the Norman M. Eberly Writing Center to listen deeply, converse openly and challenge each other intellectually as they learned to shape and refine their thinking through writing,” says Lape, noting that a tutor-in-training recently articulated the ways in which this learning experience has transformed his relationship to writing. “That is the legacy of Norman M. Eberly that I am honored to steward.”