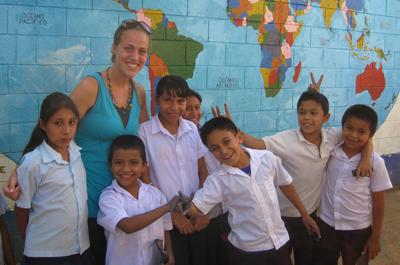 Lindsey Hazel '09 (pictured) and Elizabeth Stuhr '12 are two of the 223 Dickinsonians who have volunteered for the Peace Corps.

In 2011 Elizabeth Stuhr '12, an Africana-studies and international-studies major from Waverly, Iowa, applied for a U.S. State Department summer internship to work for the Bureau of African Affairs. For 10 weeks she worked with foreign-affairs officers at the embassy in Lomé, Togo and learned how the U.S. relates diplomatically with Togo and other West African countries.

Today this recent graduate serves as an English-education volunteer with the Peace Corps in Rwanda. For 27 months, she will teach 14-year olds in a secondary school in Kibuye, located on the eastern shore of Lake Kivu.

Peace Corps volunteers such as Stuhr are the driving force behind Dickinson being named one of the Peace Corps' 2013 Top Colleges, earning a spot at number eight among the top 25 in the small-schools category. The honor recognizes the colleges and universities in the U.S. that produce the highest numbers of volunteers. There are currently 16 Dickinson alumni serving overseas. Since the Peace Corps was founded in 1961, a total of 223 Dickinsonians have served.

"These volunteers are applying the skills and knowledge they acquired during their time at Dickinson College to help improve the lives of people across the globe," said Carolyn Hessler-Radelet, acting director of the Peace Corps.

Dickinson alumni who have served as Peace Corps volunteers now enjoy careers in finance, international law, higher education, teaching English as a foreign language, communications and journalism and many have embarked on careers in public service with the Department of State, including a U.S. ambassador; nongovernmental organizations (NGO); inter-governmental and nonprofit sectors in the U.S. and abroad, including Congreso, Pan American Health Organization and the Farming for Health and Wealth Program. Peter Bechtel '81 even started his own NGO in nature conservation and ecotourism following his Peace Corps service. Other Dickinsonians have gone on to graduate or law school or been the recipient of prestigious Fulbright Scholarships.

Learn more about the rich history between Dickinsonians and the Peace Corps.